It is often said and remarked that NRIs (in general) are out of sync with their cultural identity and heritage. But, the reverse is true. Being thousands of miles away from India, NRIs long for family functions, traditional food, cultural values, native festivities and a lot more, according to a survey which Indian Eagle, a leading international travel booking organization, recently conducted in a group of Indians in America. NRIs inculcate Indianness in and impart cultural values to their children. Some of our stories of young Indians bear a testimony to this truth about NRIs. 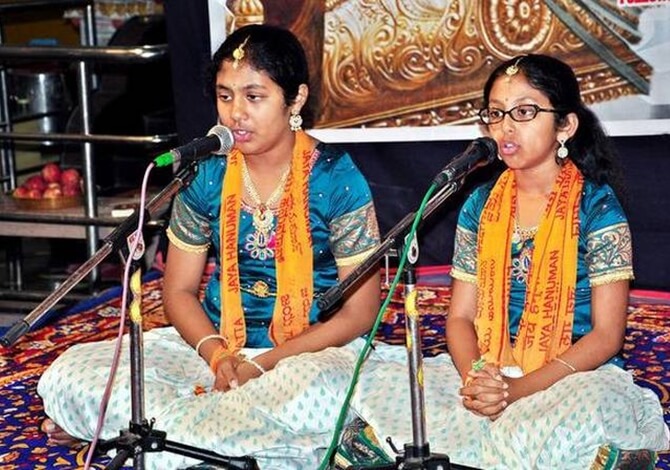 The latest instance is two young Indian American girls’ chanting of 700 slokas in the Bhagavad Gita out of memory. 9-year-old Shruti Vagdevi Vipparthy and 12-year-old Sindhu Vagdevi Vipparthy – two sisters from California, recited 700 slokas from the holy book fluently, at Datta Mukthi Kshetram on the banks of Godavari River in Andhra Pradesh, thereby surprising everyone about their umbilical bond with Indian culture and heritage.

This is not the first time that they won hearts with their single-minded recital of sacred Hindu scriptures. Previously, these California Indian girls made a world record for their nonstop chanting of the Hanuman Chalisa during a religious event in Texas. – Indian Eagle

The Indian American girls having their ancestral and cultural roots in the Telugu states of India elicited blessings from saints as well as monks for devotional chanting on another occasion in India this year. In July 2017, they wholeheartedly recited the Gita Mahatyam, the Gita Dhyanam, the Sampoorna Gita Parayana, the Gita Sara and the Gita Aarti for nonstop 4 hours from memory to the utter surprise of Sri Sachchidananda Swamiji in Mysuru.

Born and brought up in USA, Shruti Vagdevi Vipparthy and Sindhu Vagdevi Vipparthy belong to Andhra Pradesh from their father’s side and to Telangana from their mother’s side. The girls completed the grade 7 and 3 respectively in California. Their parents – Anand Murthy (father) and Vijayalakshmi (mother) – teach them the sacred scriptures and holy books of India with focus on their native cultural heritage.