The Indian community is the most accomplished of all ethnic groups in America, according to several surveys and reports. Adding to the progress and fame of the Indian community in the United States is a steady flow of talent from India. From a poor tea seller’s daughter studying in Massachusetts to an IIIT Bengaluru graduate selected for Google’s AI research wing in New York, Indians are braving the hard Trump times to make their way to the world of American Dreams.

The newest Indian face in the headlines of American media is Trisha Shetty, the founder and CEO of SheSays, a youth led NGO seeking to achieve gender equality and end sexual violence. Trisha Shetty has been selected for the inaugural Obama Foundation Scholars Program. She is the only Indian among the twelve honorees of the Obama Foundation for the inaugural edition of the program. 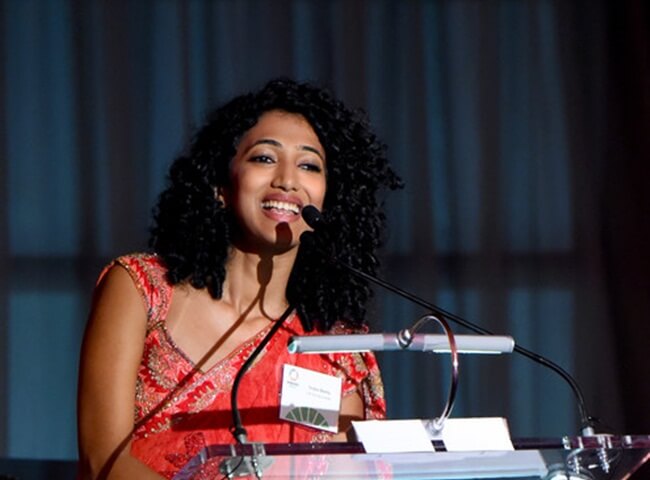 The Obama Foundation Scholars Program is a noble initiative for emerging young leaders worldwide to identity simple solutions and leverage them to solve complex global problems. The selected individuals including Mumbai-based Trisha Shetty, who are on a mission to empower their respective communities through constant innovation and creativity, will be provided with a newly designed curriculum to make their projects more effective and reach their goals through value-based leadership.

The twelve rising agents of change from across the globe will align their individual missions with the vision of the Obama Foundation during the one-year academic and experiential learning program at Columbia University in New York. The Obama Foundation scholars will work on Columbia World Projects in collaboration with government agencies, nonprofits, private organizations and the Columbia University faculty including researchers to create feasible solutions to the most pressing challenges of the time.

One of the 17 Young Leaders for the United Nations’ Sustainable Development Goals, Trisha Shetty has been selected for the Obama Foundation Scholars Program for her youth-centric approach to end gender-based discrimination and violence. Through her NGO SheSays, Trisha Shetty actively engages with the youth and prepares them as agents of social change in the domains of education, sanitation, healthcare, public policy and public safety.

A social activist and self-proclaimed feminist, Trisha was named among the social entrepreneurs and pioneer women on Forbes’ 30 Under 30 list in 2017. She has a demonstrated history of expertise in public speaking, international relations, human rights and social entrepreneurship. She was designated as a co-president at the UN Young Changemakers Conclave from 2011 until 2015.

The Obama Foundation scholars will form a global network of leaders who will, in turn, inspire and train rising leaders in their respective countries or regions. Apart from classroom studies, they will undergo multi-level leadership development programs in Chicago and Washington DC to accelerate the impact of their work with futuristic tools and real-world skills for the benefit of their communities and countries at large.

Travel Beats is an Indian community portal by Indian Eagle, a leading international travel organization. We celebrate the achievements of young Indians across the world and publish the Indian Diaspora news besides sharing regular updates on air travel, India tourism, US visa and immigration.