Success follows excellence, and excellence follows innovation. This is what 16-year-old Indian American Ankush Dhawan has lived up to. His latest achievement, the distinction of having an asteroid named after him, is an unquestionable testimony to it. Ankush Dhawan from the US state of Indiana will soon enter the elite club of 15,000 achievers who have been conferred upon the same honor.

A high school junior at Signature School in downtown Evansville, Indiana, Ankush Dhawan will get an asteroid in the Milky Way galaxy named after him through the Massachusetts Institute of Technology Lincoln Laboratory. One of the most coveted distinctions in the world, this award is presented to him for finishing second in the 2018 Intel International Science and Engineering Fair. 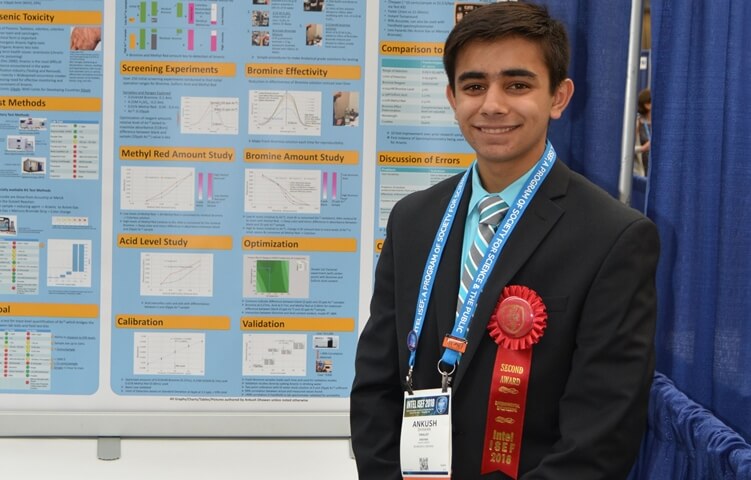 The winner of the 2018 Top Young Scientist Award at the Hoosier Science and Engineering Fair, Ankush Dhawan has been showcasing his innovations in national and international science fairs since the seventh grade. He credits his interest in engineering and environment to his parents.

Indian American Ankush Dhawan’s innovative project – an advance, cost-effective method to test arsenic concentration in water – was declared the second best at the 2018 Intel International Science and Engineering Fair. He asserts confidently that his arsenic-testing kit is 10 times cheaper, more effective and more cost efficient than the existing methods.

Arsenic is a toxic heavy metal which contaminates water and renders it undrinkable. Over 130 million people worldwide suffer from short-term and long-term health effects of arsenic contaminated water. The Maximum Contaminant Level (MCL) in drinking water must not exceed 0.010 mg/L as per the US Environmental Protection Agency.

Sahithi Pingali, a Bengaluru City teen, got a planet named after her in 2017 as an award for her extensive, insightful study on the unchecked pollution of lakes in the Silicon Valley of India.

Indiana-based Ankush Dhawan has already applied a patent for his invention. He wants to economically commercialize his award-winning arsenic test kit once it is patented, so that people suffering from arsenic contamination in the developing countries can benefit from it. Arsenic contamination of groundwater has become a major public health concern over years. The number of people affected by arsenic contaminated water has meteorically gone up in more than 20 countries including India and Bangladesh.

Ankush was among over 1700 teens from 80 countries, whose projects were selected for a display at the 2018 Intel International Science and Engineering Fair. Only the winner and the runner-up are bestowed upon the honor of having an asteroid or planet named after them.