“In India, the calendar of every state is full of only religious events and festivals.” If you think so, you are not absolutely right. Indian states boast of culturally rich dance and music festivals, held in different times of the year. The most celebrated music and dance festivals of India are held at seaside temples, historical sites of architecture ruins and shrines in the cave. The interface between art and history, these festivals are cultural celebrations, ceremonious galas and spectacular events, in the open air atmosphere. Indian Eagle offers an ode to the most famous dance festivals of India. Interwoven with the cultural fabric of Kerala, the Soorya Classical Dance Festival is held in the capital city, Thiruvananthapuram, for 10 days every year. The festival is accompanied by some other cultural programs including theatre, photography, painting and seminars. Kathak, Manipuri, Odissi, Kathakali, Bharathanatyam and Kuchipudi are some of the celebrated forms of Indian classical dance which are staged by eminent artists, during the festival. Organized by Soorya Stage and Film Society, this dance festival of India continues from October 1 to 10. Among the dance and music festivals of India, Elephanta Festival is a cultural pride of Maharashtra. The festival is held in the cave shrine of Lord Shiva on Elephanta Island, a 10 km boat drive from the Gateway of India in Mumbai Harbor. Illumined with the interplay of various lights, the Lord Shiva temple in the caves of Elephanta Island comes alive as a seat of art and culture, in the month of March every year. Since its inception in 1989 by the Maharashtra Tourism Development Corporation, Elephanta Dance Festival celebrates the folk dance form of each Indian state. 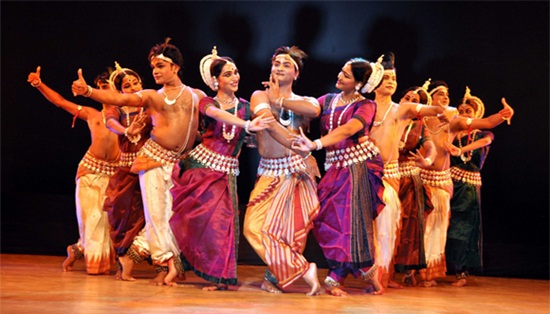 Khajuraho, situated in Madhya Pradesh, holds the cultural traditions of Central India. A small village in Bundalkhand, Khajuraho is famous for its legendary temples where the dance festival is held ceremoniously, in the month of February every year. The festival is a gripping celebration of Indian classical dances, performed in the backdrop of flamboyantly illumined temples – the Chitragupta Temple and the Vishwanatha Temple under the evening sky. Once upon a time the capital of the Chandela Dynasty, Khajuraho is a dedicated chapter in the thousands-year old Indian history. 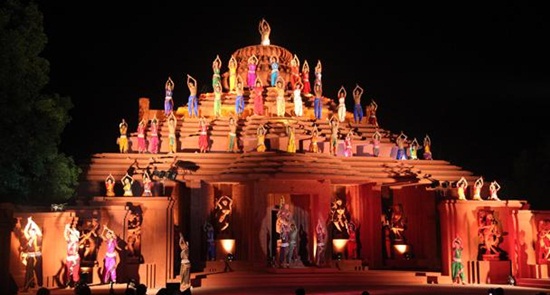 One of the most spectacular dance and music festivals of India, Konark Dance Festival is held at an open air auditorium in the backdrop of the Sun Temple which is also known as the Black Pagoda. The marvelous architecture of the Konark Sun Temple is shaped like a chariot with wheels drawn by seven horses. On the Chandrabhaga beach of Konark, near the holy city of Puri, the Konark Temple offers a wonderful ambience when lit colorfully during the festival in the month of December. Odissi Dance, an age-old cultural identity of Orissa, is an exclusive highlight of the festival. Other dance performances such as Chau dance, Manipuri, Kathak and Bharathnatyam make it a lavish feast for the eyes. Held in the month of January, Ellora Ajanta Dance Festival is an interface between culture and history of India. The historic Ajanta and Ellora caves of Aurangabad are in the spotlight during the festival. Organized by Aurangabad Festival Committee in collaboration with Maharashtra Tourism Development at Soneri Mahal, the festival presents the best of classical and folk dance forms in a blend. The glittering beauty of the festival and the splendid architecture of Soneri Mahal make a rare spectacle to behold with wonder. The regional art and craft of Maharashtra is also exhibited at the festival site. Mamallapuram, a seaside temple town in Kanchipuram district of Tamil Nadu, prides itself on the popularity of the dance festival. The most important port in the Pallava Dynasty of the 7th and 8th centuries, Mamallapuram is a tourist destination known for its stone temples and monolithic rock sculptures. Arjuna’s Penance, a mammoth architecture with finely carved rock sculptures, serves as venue of the Mamallapuram Dance Festival, in the backdrop of the Bay of Bengal. Lulled by gentle breezes blowing over the sea, the atmosphere of the town is suitable for the festive mood. The festival begins in the last week of December and continues for three weeks in January every year. Gujarat does not lag behind other states of India when it comes to claiming fame for art, culture and history. Modhera Dance Festival, an annual cultural phenomenon in Mehsana district of the state, is held at the Sun Temple, an architectural excellence that belongs to the regime of the Solanki King Bhimdev I. Though lying in ruins, the temple exudes its historical charms when the surrounding is illumined for the festival. Dance and music performances by traditionally clad artists add to the spell of the atmosphere. Modhera Dance Festival is held in the month of January.

Book your trip to India and explore the cultural heritage. There is no best time to get the best flight. Indian Eagle offers cheap airfare deals round the year!

BOOK My Trip to India