‘US airports vs Indian airports’ had been trending on social media until recently, as the Memorial Day holiday weekend 2022 saw a mayhem at the airports across America over the cancellation of around 2800 flights in the very beginning of summer travel. The topic got a new perspective: Indian airports are better than US airports, when Jay Kotak, son of an Indian billionaire banker with a net worth of USD 1360 crore, tweeted a photograph of Boston International Airport airing his frustration over serpentine security lines, inordinately long waiting hours, operational delays, fewer flights, staffing shortage and likes there.

He tweeted, “Mumbai Airport handles MORE passengers than Boston. Yet, there are a few lines. All counters are staffed, the airport is new and clean. Flights are cheaper. India works.”  The tweet gained momentum over the past few days with NRIs who shared his sentiments about the ongoing pandemonium at US airports where they took international flights to India from. Boston Logan International Airport’s pre-pandemic traffic was 42 million in 2019, whereas Mumbai CSMI Airport recorded 46 million passengers during the same period. 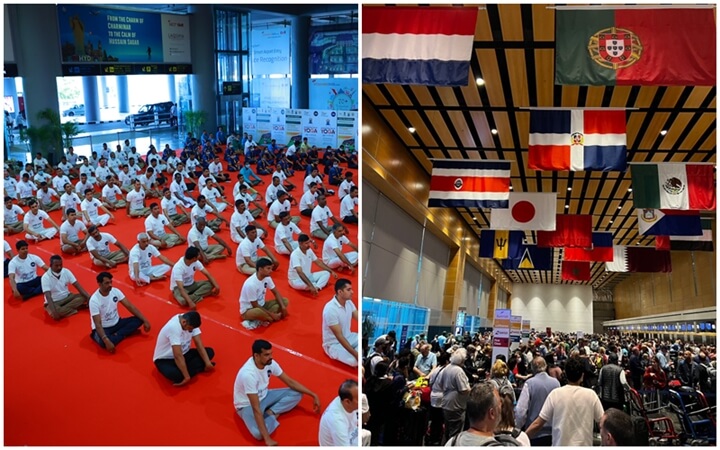 The aforementioned issues continue to hit the air travel industry of the world’s biggest economy as the delay of more than 3000 flights to, from, and within the US left fliers fumed on June 20; whereas major Indian airports including Hyderabad RGI Airport were gearing up for the International Yoga Day celebrations scheduled on June 21. The contrasting pictures of the airports in the two different hemispheres validate the current trend – Indian airports are better than US airports – only to some extent.

The week preceding Father’s Day on June 19 was another headache for major northeast US airports, including Boston, Atlanta, New York, Newark, and DC. On the eve of the Father’s Day weekend, more than 500 incidents of flight delay and tens of flight cancellations rocked Boston Logan Airport alone amid thunderstorms, the lingering impact of which was accentuated by US airlines’ severe staffing shortage. During the Father’s Day weekend, Atlanta’s Hartsfield Jackson International Airport and other major gateways saw the disruption and rescheduling of fliers’ travel plans for the same reasons.

America is still deep into the travel woes, which aviation experts expect to continue through and after the US Independence Day 2022 due to the nationwide shortage of pilots and airport staff amid a huge post-pandemic travel demand.

Reportedly, Delta Airlines is reducing its daily flying capacity by 100 flights from July 1 through August 7. Southwest Airlines has stripped its summer schedule of nearly 20,000 flights through the Labor Day, September 5. American Airlines, on June 22, announced the cut-off of its service to four US cities, including Islip and Ithaka in New York; Toledo in Ohio; and Dubuque in Iowa after the Labor Day weekend. The airline has cited the ongoing pilot shortage as the most obvious reason.

United Airlines whose suspended routes – Newark to Mumbai and SFO to Delhi – have been restored for scheduled services will reduce flying on domestic routes from New Jersey by 50 flights a day starting July 1. This cut is equal to about 12% of UA’s schedule at Newark Liberty International Airport. Airport construction and capacity restraints, rather than the shortage of pilots, have factored into the strategic decision to reduce flight delays that have jeopardized travel plans over the past few weeks, according to the airline’s spokesperson.

The staffing shortage that the US aviation industry is going through due to the pandemic-induced furloughs and early retirement of aircrew, as well as some of the working crew’s non-compliance with the vaccine requirement, shows America’s myopic outlook to and lack of preparedness for a travel rebound. The same is true about Europe and Australia having understaffed airlines and airports these days. If a recent Bloomberg report is to be believed, London’s Heathrow Airport struggling with labor crisis, has directed airlines to temporarily cut 10% of their operations at two of its terminals amid a dire surge of complaints about long queues, missed flights, baggage delays and other similar issues. Amsterdam Schiphol Airport and Germany’s Frankfurt Airport – two of the busiest international hubs in Europe – are no exception to this grim scenario.

On the other hand, India prepared for the post-pandemic travel boom in a phased manner, not from the beginning of 2022 but from the peak days of air bubble flights in 2021. Indian aviation saw a five-fold growth on the domestic front as 1.20 crore travelers flew within the country in May 2022, which was a meagre 21 lakh in May 2021, as per the data from the Directorate General of Civil Aviation (DGCA). Given the poor ratio of airports (137) and total number of domestic flights to the annual passenger traffic in India, the airports and airlines managed the flying of 1.20 crore passengers on domestic routes without major hiccups in operations.

Needless to say, the passenger load factor is higher in India than that in the US where there are 5217 public airports (as of 2020). Surprisingly, no major US airport won the Skytrax Award 2022 for the World’s Best Airport Staff. Delhi International Airport emerged as the best and cleanest airport in India and South Asia at the Skytrax World Airport Awards 2022.

Saying that the operational efficiency of Indian airports is comparatively high is no exaggeration, given the civil aviation infrastructure which is still developing in India. Mumbai International Airport alone registered the highest single-day number (91,904) of passenger footfalls on October 17, 2021 when a third wave of the pandemic was around the corner. With reduced manpower in the fiscal 2021, India smoothly handled more than 10 million international departures and arrivals, mostly through New Delhi IGI Airport and Mumbai CSMI Airport, amid a slew of travel regulations including temperature check, random testing, immigration check, Air Suvidha registration form verification, quarantine measures, and final destination-wise passenger segregation.

“I must say India is not a never-never land of aviation. There are occasional hiccups too, but they are of small magnitude unlike the existing bottlenecks in the United States’ recovery of aviation economy. In May, a number of complaints about immigration delays and long waiting hours erupted on social media due to a few unmanned immigration check counters in the arrival and departure terminals of Bengaluru Kempegowda Airport and Chennai MAA Airport. However, the airport staff crunch in India is not as miserable as it is in the US. Reportedly, the chairman of Airports Authority of India (AAI) has reported the issue to the Ministry of Civil Aviation,” said Sourav Agarwal, the Editor of Travel Beats, a one-stop travel news portal for Indians in America by Indian Eagle.