It is high time that airlines should collectively bring a policy to guarantee completely nut-free inflight environment for travelers with nut allergies. Earlier in March this year, Korean Air hit global headlines for kicking two Indian-origin minors with severe peanut allergy off its Seoul to Manila flight, instead of complying with the unaccompanied minor boys’ special request not to serve peanuts aboard.

Very recently, a similar incident of less gravity befell to two Indian-origin siblings on an Emirates flight. The siblings – Sundeep Sahota and Shannen Sahota suffering from severe nut allergies – boarded the Emirates flight at Birmingham Airport for Singapore, in order to celebrate their parents’ 60th birthday away from home.

Reportedly, the siblings claimed to have informed the airline about the severity of their nut allergy not only at the time of booking Emirates flight tickets, but also while checking in at Birmingham Airport and boarding the plane. The brother and sister duo had shelled off over $6520 (£5,000) for the seven-and-a-half-hour flight. However, it was not even an hour aboard from the time of boarding; the siblings noticed to their utter dismay that an inflight meal with fried cashew nuts was being served to passengers. 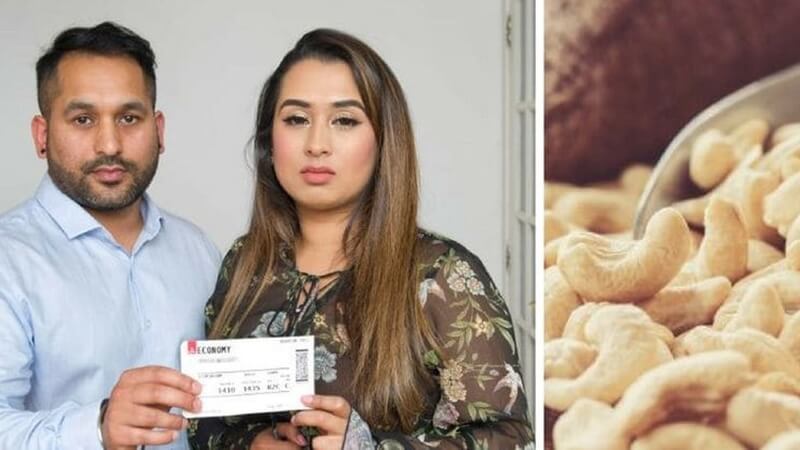 The moment they hit the panic button on their discovery of cashews in chicken biryani served on board, they complained about the airline’s noncompliance with their special request to the inflight attendants. Apprehending anaphylactic shock from their potential exposure to nut residue in the air circulated by the aircraft vents, they implored the cabin crew to stop serving the food with cashew nuts.

As per reports, the Indian-origin siblings claimed that a member of the cabin crew blatantly told them that they had better sit in the cabin loo for the rest of the flight.

They were shocked at the aberrant remark on their plight aboard. “It was uncomfortable, embarrassing and demeaning,” Shannen Sahota told media. Displeased at the suggestion, the siblings moved to the back of the plane and covered their heads with blankets to avoid breathing in nut residue for the remaining seven hours of the flight.

However, an Emirates Airlines spokesperson refuted the siblings’ complaint on grounds of no mention of their severe nut allergy in the airline’s records of the Sahotas’ booking. The spokesperson also said, “Emirates tries its best to cater to passengers’ individual or specific needs by offering various special meals aboard, but completely nut-free environment cannot be guaranteed on any flight.” While apologizing for any inconvenience caused to the Sahotas, he emphasized that the policy for passengers with nut allergy is distinctly outlined on the airline website.

The question that arose out of the incident involving Emirates Airlines’ limited liability to provide nut-allergy free flights is, “Should we be assured of our special requests being accepted and complied with by airlines we travel on by the time we board our flights?” The chief customer relations officer of IndianEagle.com, a leading air ticketing agency in the US, opines that travelers with special needs like the Sahota siblings’ should seek an email confirmation of their request for a nut-allergy free flight being accepted by airlines, possibly, within 24 hours from the time of booking.”

Korean Air has stopped serving peanuts on its flights in response to the misery of the two unaccompanied minors with severe peanut allergy. Let’s see whether Emirates and other airlines follow suit.