The Internet and media went gaga on the Rs-720-cr Isha Ambani wedding in December 2018. Now the stories of Akash Ambani wedding are inundating social media. Splendors of big fat Indian weddings do often eclipse the message of usual Indian weddings having a difference. Unlike the multi-billion-dollar Ambani family weddings, there are many Indian weddings on a shoe-string budget, which have proved that a wedding can be unforgettable and memorable if it serves a greater purpose for community welfare.

We at Travel Beats, an Indian diaspora portal by Indian Eagle Travel, curated eight unusual Indian weddings with a humanitarian difference, which may make you forgo the magnificence and extravagance of big fat Indian weddings. 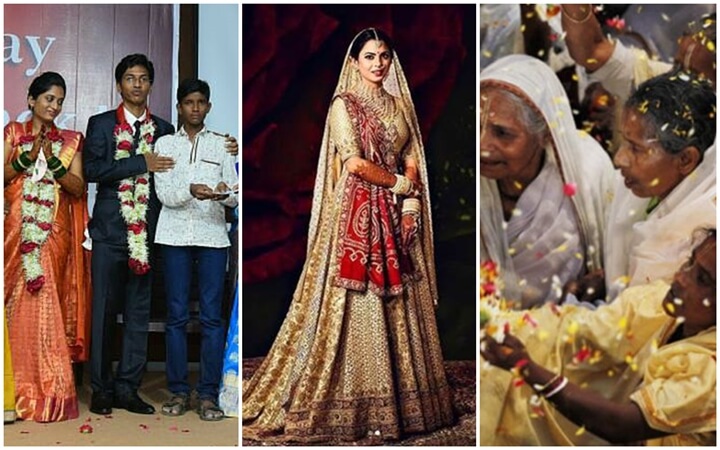 When Asia’s richest business tycoon Mukesh Ambani was busy with his son’s lavish engagement in Goa, Aurangabad-based Omkar Deshpande married off his sister in an unconventional wedding ceremony that created history. Both the families – the bride’s and the groom’s – promoted plantation, blood donation and organ donor registration at the wedding. Saplings were distributed to the guests, with an urge to grow them with the same attention as they give to the needs of their children. Having no belief in verbal blessings and prayers, the families entreated the guests to donate blood in an act of blessing the newlywed couple. They went on to create awareness about organ donation at the wedding venue. 20 people including the bride and the groom registered as organ donor.

18000 widows were invited to this Indian wedding

Unlike the Ambani family weddings studded with Bollywood celebs and diplomats from the US, the wedding of a Gujarati businessman’s son was graced by 18,000 widows in 2017. Jitendra Patel, a diamond merchant of Mehsana invited widows from all over Gujarat to his son’s wedding in order to break the taboo that widows’ presence in a wedding brings bad luck to the newlywed couple. Further, each of the widows returned with a blanket and a sapling. Of them were 500 economically disadvantaged widows, each of who was given a milking cow for sustenance. Evidently, it was one of the most unusual Indian weddings.

Budget for this Indian wedding funds wedding of 100 poor girls

Gopal Vastapara, a real estate merchant from Gujarat, got his son married in one of unusual Indian weddings. He held a simple ceremony and spent the savings to fund the wedding of 100 underprivileged girls in his village in 2016. He not only bore wedding expenses for those girls of Chamardi Village in Amreli district of Gujarat, but also gifted them household items. Unlike the Ambanis who spent Rs. 3 lakh on the daughter’s wedding card per invitee, Gopal Vastapara pledged to sponsor mass weddings for economically weaker families for the next 10 years.

Unlike the Ambanis who have planned for their son Akash Ambani’s bachelor party in Switzerland for crores, Maharashtra-based businessman Manoj Munot built homes for 90 underprivileged families using the money he had saved for his daughter’s wedding. He allotted Rs. 1.5 crore to the building of 90 cottages for the needy by relinquishing the extravagance of big fat Indian weddings. 90 poor families including his servants got access to safe drinking water and electricity at their new residence. All thanks to unusual Indian weddings!

Jayant Bhole and his family from Maharashtra made headlines for choosing philanthropy over the pomp of lavish Indian weddings in 2017. Their only son’s wedding was devoid of the trappings of big fat Indian weddings, like royal feasting, flamboyant settings and chopper flights. Jayant Bhole donated a lump sum from the wedding budget to help build a RO water plant for the people of Varkhede village in Jalgaon District of Maharashtra. They spent neither on firecrackers nor on band baja for the wedding.

This Indian bride asked for 10,000 saplings instead of gold

Unlike the richest Indian billionaire’s daughter Isha Ambani who received a Rs-450-crore sea-facing bungalow from her in-laws, Priyanka Bhadoria, a 22-year-old science graduate in Madhya Pradesh, asked for 10,000 saplings instead of gold and diamonds as a wedding gift from her in-laws. Conscious of widespread deforestation and depleting water level in her village, Priyanka broke loose from the age-old tradition and stunned everyone with her unusual wish for the ceremonial gift. In another unusual Indian wedding, a bride in Haryana interrupted the nuptial proceeding before taking the seven wedding vows and asked the groom to promise that he would fund the education of 11 needy girls.

Indian weddings with a difference include the wedding of IRS officer Abhay Deware, a farmer’s son in Amravati district of Maharashtra where many farmers have committed suicide because of crop failures and mounting debts. Encouraged by former President Pranab Mukherjee to be a socio-economic change maker, Abhay Deware donated the money set aside for his wedding to 10 farmer families for the education of their children. He also donated books worth Rs. 52000 to five rural libraries. Whereas big fat Indian weddings are in vogue, he had a registry marriage followed by a humble reception. The reception venue was decked with inspirational posters, instead of traditional flower décor, to motivate guests to do something for the underprivileged.

Unlike the multi-billion-dollar Ambani weddings deploying hundreds of chartered flights and luxury cars for the guests, Surat in Gujarat witnessed one of the most unusual weddings when 258 bridegrooms, along with their relatives and guests, paddled bicycles to the wedding venue. A part of the mass wedding event in Surat, the environment-friendly initiative set an example for noisy wedding processions and created awareness about the rising air pollution.

Brought to you by Indian Eagle, a leading online travel booking organization, this article is not a bashing of Ambani family weddings. Rather, the article is intended to promote unusual Indian wedding with a difference, which don’t get media attention as much as big fat Indian weddings do.