Indian Railways, the world’s fourth largest railway network and eighth largest employer as of 2017, did supposedly take the first step towards mitigating open defecation in British India. We do all know that the British had introduced railways in the colonized India, but what many of us don’t know is who was responsible for the introduction of toilets on trains in India.

The first commercial train journey in (British) India took place between Bombay and Thane in 1853. The 14-carriage passenger train deployed for achieving the first historic milestone in becoming the transport lifeline of India had its debut run without a toilet back then. Passenger trains were equipped with toilets after the railway network had gradually spread to the erstwhile provinces of Bengal, Assam, Andhra Pradesh, Gujarat and Rajasthan over a period of five to six decades.

If Lord Dalhousie, the then Governor General of India, is hailed as the father of Indian Railways, the father of toilets in railways is a dhoti-clad Indian named Okhil Chandra Sen from the then undivided Bengal (Bengal Presidency). 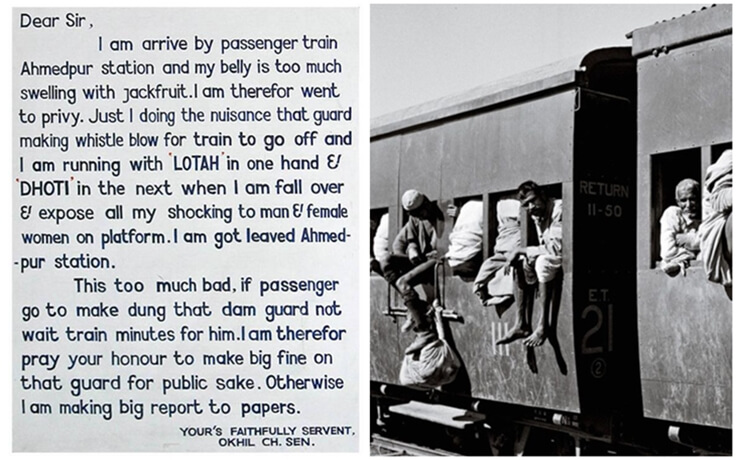 An aggrieved Okhil Chandra Sen’s letter of complaint, in broken English, to the Sahibganj divisional railway office drew attention to the discomfort and inconvenience of passengers for the lack of toilet facility during train travel in 1909-1910 when the nationwide protests, including Swadeshi Movement, against the Partition of Bengal were in full swing. The letter reads:

I am arrive by passenger train at Abmedpur station and my belly is too much swelling with jackfruit. I am therefore went to privy. Just I doing the nuisance the guard making whistle blow for train to go off and I am running with lota in one hand and dhoti in the next. When I am fall over and expose all my shockings to man and woman on platform. I am got leaved at Abmedpur station.

This too much bad, if passengers go to make dung, the damn guard not wait train five minutes for him? I am therefore pray your honour to make big fine on that guard for public sake otherwise I am making big report to papers.

Okhil Chandra Sen’s hilarious letter of his frustration, written in broken English, cut an ice with the British railway authorities and paved the way for toilets to lower-class passenger trains running more than 50 miles in those days. Undeniably, this Bengali made it possible for millions of travelers to answer the nature’s call comfortably onboard during train travel across the country.

A hand-painted copy of the letter, an important document in the history of Indian Railways, is on display at the National Rail Museum in New Delhi. This November 19 is the World Toilet Day.

This story about the introduction of toilets on Indian trains is brought to you as part of the campaign, “Explore India with Indian Eagle”, aiming to promote what is lesser-known about India through our overseas Indian community portal, Travel Beats. Travel Beats is a subsidiary of Indian Eagle Travel, a leading international air travel booking partner of Indians abroad.