India is known for not only incredible tourist attractions but also offbeat events. Rural Olympics in Raipur, the capital of Chhattisgarh, and Velas or Konkan Turtle Festival in Velas on the Konkan coast of Maharashtra are among the most offbeat events. If Rural Olympics provides entertainment, Turtle Festival is full of wonder. The latter was recently held. Indian Eagle weaves a story by stitching together the details of the festival shared by some of the visitors. 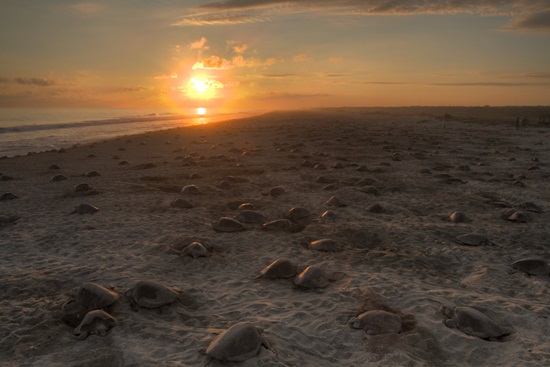 Velas is one of the small villages in Ratnagiri District on the Konkan Coast of Maharashtra. The beach in proximity with the village is known as Velas Beach, the venue of the festival. Home to the Olive Ridley turtle population, Velas is the birthplace of these harmless sea creatures. Bound to the place by their umbilical cord, the turtles of this species visit the beach where the females or she-turtles lay eggs every year.

The occasion of their visit or return to the Velas Beach is celebrated as Velas ro Konkan Turtle Festival. The Olive Ridley turtles are programed by nature to pursue such an offbeat activity. They act by their instincts which fetch them to the beach where they were born. Konkan Turtle Festival is not a mere festival but a turtle conservation movement. The residents of Velas have taken the initiative to protect the turtles during their visit to the beach.

Turtles are among the endangered creatures in India. They need to be protected and conserved for survival. So the Government of Maharashtra in collaboration with environmentalists, animal activists, and NGOs organize the Konkan Turtle Festival to promote the need for conservation of turtles. Many animal and nature lovers respond to the cause as well as join the campaign every year.

Once female turtles lay eggs in the deep of sands on the Velas Beach, the eggs are collected and transported to hatcheries. Incubation of the eggs takes place in the hatcheries where the eggs are treated in a safe atmosphere ensuring their chances of survival. Evidently, it protects them from atmospheric adversity, pollution and predators. Once the eggs are hatched, the baby turtles are transported back to the ocean. It is a pleasure to see the baby turtles walk across the sand and make their way into the sea with little unstable steps.

The Konkan Turtle Festival is held in March every year. This animal conservation initiative for environmental wellbeing of the aquatic ecology has become a tourist attraction in the Konkan region of Maharashtra.

India is full of such offbeat destinations, attractions and activities. Why not go on an adventure spree to discover them while the opportunity of flying with the cheapest air ticket is available at IndianEagle.com!