Udaipur- the city of Lakes has earned a rare distinction on a global scale. The world’s first- ever silver museum was unveiled at City complex. What sets apart the museum is it has rare Family heirlooms dating back to 743 AD. 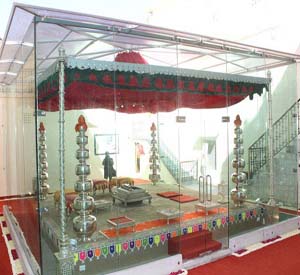 Titled “‘Splendor of Silver’ the intrinsic value of some exhibits is priceless. The 1939 customized buggy has a high value in terms of heritage which was part of the dowry of the current monarch’s late mother. The wedding mandap which His Majesty gave away his daughter two years ago is also sheltered in a glass case.

Silver articles are displayed at the renowned Amar Mahal, at the entrance of Zenana Mahal which has found inspiration for the Taj Mahal in Agra.

The craftsmanship reflects the longstanding relationship between the House of Mewar and Rajput courts with the Mughal establishment during the historical times.

The technique employed by the indigenous artisan speaks volumes of the artistry of the silversmiths belonging to that era.The precious metal is known to adapt to limitless forms with ease. Molding and casting into various shapes is easy as its characteristic is unique.Considered sacred among Hindus, silver is associated with the shades of the moon.

A favorite with the Indian royalty, silver is popular for its purity. Second to Gold, silver articles for religious purpose makes it an all utility metal.