The United Nations selected 17 young leaders for the inaugural phase of sustainable development goals which are expected to culminate by 2030. The 2016 list of UN Young Leaders includes one Indian American and two Indians for their leadership in shouldering responsibilities towards society and environment. They are Karan Jerath, Trisha Shetty and Ankit Kawatra. 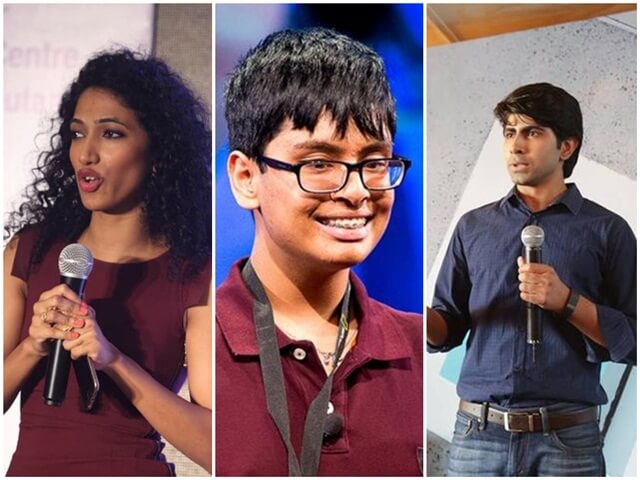 19-year-old Indian American Karan Jerath from Texas invented an innovative device to prevent undersea oil spills and won the prestigious Intel Foundation Young Scientist Award 2015 last year for it. The patent-pending device is a capping solution that can collect and contain oil and gas leaking out of the sources under water. Born in India and raised in Malaysia, Karan Jerath settled in USA when he was 13.

Karan Jerath’s award-winning invention to save marine life from undersea oil and gas spills was inspired by the BP Deepwater Horizon Oil Spill of 2010 in the Gulf of Mexico, the largest marine oil spill in the history of the United States. A young scientist and researcher, Karan made it to Forbes’ 30 Under 30 Energy list 2016.

25-year-old social crusader Trisha Shetty from Mumbai is one of the Indians among the 17 UN Young Leaders for sustainable development goals. Trisha is the founder and CEO of SheSays, a digital portal for women empowerment against sexual violence in India. She along with a team of young change makers strives to create an environment of zero tolerance to violence against women in India and build a network of support to fight all sorts of sexual abuse.

At SheSays, Trisha not only educates and empowers victims of sexual violence but also works towards rehabilitating them in association with educational and health care institutions. She and her team conduct edifying workshops in colleges to sensitize the young on gender-based violence and work with private hospitals to provide rape victims with holistic treatment.

Feeding India currently operates in 28 cities and has a network of over 2,000 volunteers who collect excess food from restaurants, corporate offices, events and individual households for the hungry. Ankit Katwara and his team have distributed approximately one million meals till date.

The inaugural class of UN Young Leaders Program 2016 is formed with 17 change makers selected out of over 18,000 nominations from 186 countries. The 17 UN young leaders will be working on various projects supported and led by the United Nations for the Sustainable Development Goals. They are emblems of youth power and outstanding leadership, according to Ban Ki-moon, the UN Secretary General.

Other Interesting Stories of Young Indians

Travel Beats, a digital portal for Indian Diaspora by IndianEagle, celebrates the achievements of Indians and Indian Americans from different walks of life. Join our free newsletter for the latest news and stories about the Indian community from USA and India.