Indeed, a savior is greater than a killer. An Indian-origin metro train operator saved the life of a man from what could have been a fatal accident in a blink of an eye. The man who was identified as an Asian was pushed onto the subway tracks in a possible hate crime incident in New York, according to some onlookers’ report to the police. 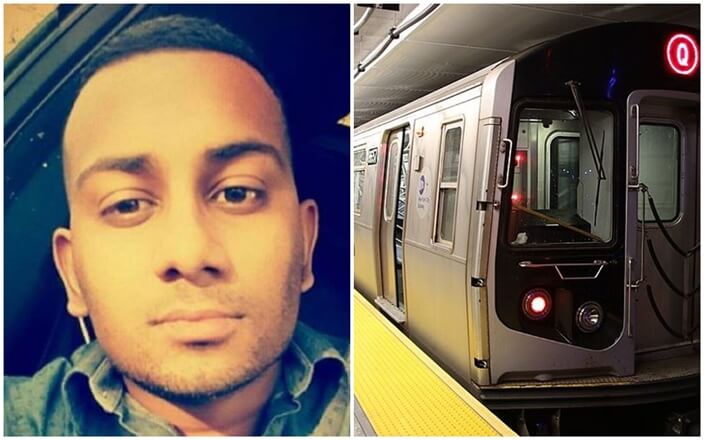 When the Indian-origin subway train operator named Tobin Madathil was pulling into a metro station, he heard a commotion. He noticed some people waving at him, in a bid to signal a danger ahead. He immediately put the train on an emergency mode and managed to halt the train lesser than 30 feet from the man shoved onto the tracks. His heart missed a beat on seeing the man lying stuck helplessly.

“I am glad I was able to stop on time and didn’t hit the guy, thank God!” Tobin Madathil told the New York Post. The Hill website described Tobin’s quick-thinking act as “heroic”.

29-year-old Tobin not only stopped the train from hitting the man, but also exited the train to help him. When he went near the man, his heart missed a beat on seeing him bleeding from a cut on the forehead. He called the New York subway control centre for medical attention to the man. The victim was taken to Mount Sinai Medical Centre.

Tobin, who has been working as a metro train operator for two years, said, “I just try to stay focused and keep an eye on the tracks and platform when I operate,” while explaining how he tries to avert such unexpected incidents as this in the subway. He earned kudos from the New York police for his dutifulness and sincerity. The incident is being investigated for an apparent hate attack.

Recently, President Joe Biden signed a landmark bill into law for prevention of hate crimes against Asian Americans in view of a spate of hate attacks in the aftermath of the pandemic. While presenting the bill titled “COVID-19 Hate Crimes Act” at the White House, Biden said, “Silence is complicity and we cannot be complicit. We have to speak out. We have to act.” The act will help monitor and document hate crime incidents by creating a framework under which the federal, state and local authorities will work jointly.