Ram and Meenu Gupta from Boston, is all set to ring in the New Year 2020 with a gift for the visually impaired in India. The Indian American couple came forward to fund a national resource center for the visually challenged in and around New Delhi. The new Indian center of the US-based Vision Aid, a nonprofit organization in Massachusetts, will start in January 2020.

Dedicated to the memory of Ram Gupta’s late father, Lachhman Das Gupta, the New Delhi center of Vision Aid will not only treat the visually impaired, but also educate and empower them for a better life. The Indian American Gupta family owes their philanthropic commitments to late Lachhman Das Gupta, who breathed his last this year. 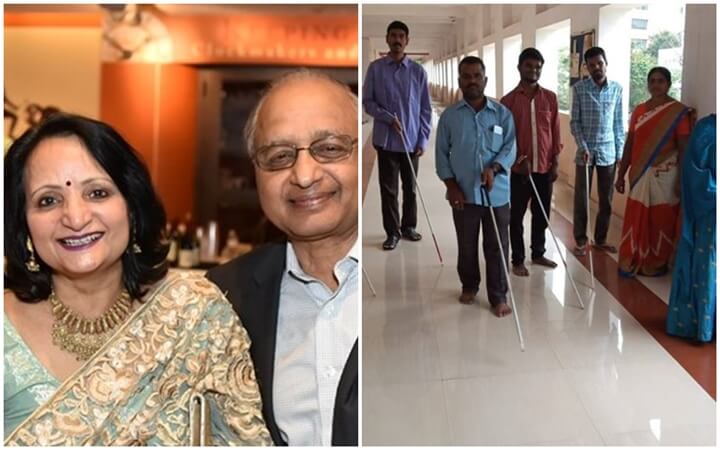 The root of Ram and Meenu Gupta’s philanthropic mission in India is Lachhman Das Gupta’s loss of eyesight. He was diagnosed with retinitis pigmentosa when he was 30. He almost lost his eyesight and became blind of both eyes by the age of 50. However, he never turned blind to his social responsibilities and civic duties. He was always on his toes to help others out with knowledge, experience and intuition. His empathetic outlook to people around him was his third eye.

The way late Lachhman Das Gupta run a high school, managed a temple trust, raised funds for a charitable dispensary, and maintained dharamshalas in India had nothing to do with his loss of eyesight. His vision was his life’s driving force. In memory of late Lachhman Das Gupta, Ram and Meenu are looking to found a trust in order to continue supporting the charities and furthering the causes for tens of years down the lane.

The Gupta family-funded center of Vision Aid in Delhi will act as a vision rehabilitation center for underserved communities. It is said to offer an array of meticulously designed programs for children and adults affected by terminal vision impairment. There is more to what the new national resource center of Vision Aid will offer starting in January 2020.

In compliance with the mission of Massachusetts-based Vision Aid – that is to enable persons with vision disabilities live independently – the New Delhi center will offer skills-based training programs and impart lessons on spoken English to the visually impaired adults, depending on their individual needs and specific circumstances. Computer-based training in mobile technologies is also among the programs for empowering them. Those with complete blindness will be provided assistive devices and gadgets to help reduce their dependence on others.

Meenu and Ram Gupta were introduced to the vision and mission of Massachusetts’ Vision Aid by Puran Dang and one of their family friends. Chairman of Vision Aid, Puran Dang lauded the Gupta couple’s generous support for a new resource center in Delhi, India. Citing references to their long family history of giving back, he described them as a shining example of benevolence and philanthropy.

This inspiring news about giving back to India is part of our continued effort to promote good deeds of Indian Americans, at Travel Beats, a leading community portal for Indians in the US and a subsidiary of Indian Eagle. Indian Eagle not only strives to offer the cheapest fare deals for flights to India from USA but also caters inspiring community stories, visa & immigration news, and international travel alerts through free newsletters.