The achievements by Indian Americans in art, science, entertainment, education, technology, and entrepreneurship have been creating stories which are worth sharing with Indians and retelling several times. The image of India looms large at the global level because of the NRIs in the USA and Canada. Indian Eagle presents a collective picture of the Indian Americans who made it to the headlines in the month of October this year. 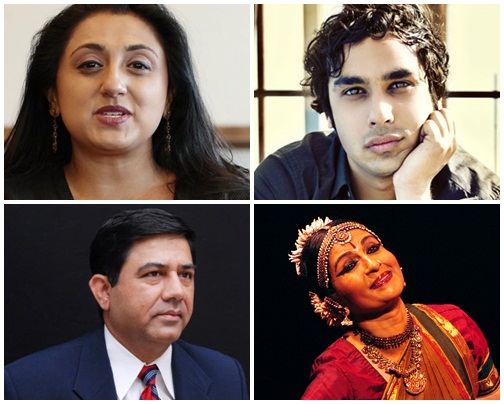 Among the recipients of the 2013 Missourian Award in medicine is an Indian American plastic surgeon from Springfield. Dr. Bharat Shah is going to be awarded for his inventions which are supposed to contribute towards the evolution of healthcare services. Recently, Shah has invented four innovative medical devices. He has been credited with the invention of the Secure Flip Pediatric Dual Positioner. The surgeons use the device to protect the spine while flipping patients from their front to the back during surgeries. His another invention, the Secure 360 Prone Positioning Device, streamlines a surgeon’s access to different parts of the skull, and makes it possible to keep the patient’s body stable while operating a surgery of the head. The GraftOn Skin and Tissue Applicator, one of Shah’s latest inventions, streamlines the process of skin grafting. Dr. Bharat Shah works with Mercy Research and Development in Springfield.

Be it science or arts, NRIs have been continuing to excel in. Akash Goyal, an Indian American television producer, has bagged an Emmy Award for his creative excellence at the 65th Annual Creative Arts Emmy Awards in Los Angeles. The award recognized his creative approach towards conceptualizing and designing the outstanding interactive program, “Night of Too Many Stars: America Comes Together for Autism Programs”.

Again, it is an Indian American whose research on the application of mindfulness meditation practices in changing the structure and function of the brain to keep a check on the stress level has been an aid to the US Army. Dr. Amishi Jha, a neuroscientist and associate professor of psychology at Miami University, has been trying to help the USA soldiers battle stress, ensure good memory health, and keep their minds at work. Being born in India, Dr. Jha believes in the value and power of the Indian culture that meditation is related to. She has been researching on the convergence of meditation and contemplative neuroscience for a natural solution to stress and anxiety.

Indian Americans do not lag behind when it comes to counting achievements on the business front. The honor, given to Anil Agnihotri by the Atlanta Business Chronicle, suffices to justify the statement. He is founder and managing partner of the US India Business and Research Center in Atlanta, the capital of the US state of Georgia. He was honored with the distinction of being a finalist in the “Individual of the Year” at the Governor’s International Awards presented by Atlanta Business Chronicle. Anil Agnihotri has been instrumental in promoting business relationships between India and the USA for business organizations and educational institutions in Georgia.

Indian Americans have made a mark in the showbiz business of the US, too. Kunal Nayyar, one of the illustrious figures in American Television, is going to pen a comic memoir for Atria Books. Among the Indian Americans, Kunal Nayyar is a star of the comedy “The Big Bang Theory’, a runaway success on American Television. Recently, he has produced “Beyond All Boundaries”, a documentary on the frenzy of cricket fans. The documentary will be screened at the San Francisco International South Asian Film Festival this November. His plan to publish a book of autobiographical essays covering his real life experiences is in the pipeline.

That Indian Americans are leading in entrepreneurship is best exemplified by Prem Watsa, the billionaire founder of Fairfax Financial Holdings Ltd., who has stepped up to invest the biggest amount in purchasing BlackBerry. Prem Watsa whose Company is supposed to be the largest shareholder of BlackBerry is a Canadian of Indian origin. He was born in Hyderabad. He is one of the most famous value investors and known for his deliberate investing approach.

The 2013 list of members for the National Council on the Arts has named two illustrious NRI personalities – Ranee Ramaswamy and Deepa Gupta – who have carved a niche in Indian performing arts. The former is an award-winning Indian American Bharatanatyam dancer, and the latter is an arts philanthropist. Ranee Ramaswamy is the founder of the Ragamala Dance Company in Minneapolis. She offers lessons on choreography and teaches Bharatanatyam. Based in Chicago, Deepa Gupta is the director of education initiatives and strategies at The Boeing Company.

Indian Eagle celebrates the achievements of Indian Americans by booking the cheapest flights to India for them.