Do you know when and where the world’s first traffic light was installed? Cleveland in the North American state of Ohio was the first city to have got the world’s first electric traffic signal on August 5, 1914. The pair of green and red lights at crossroads of major streets, which came to be known as traffic signal and made traffic control a lot easier across the world completed its 101st anniversary today. A simple scientific experiment to automate traffic control became a technological breakthrough in the history of innovation. Indian Eagle traces the history of traffic signals back to 1868. 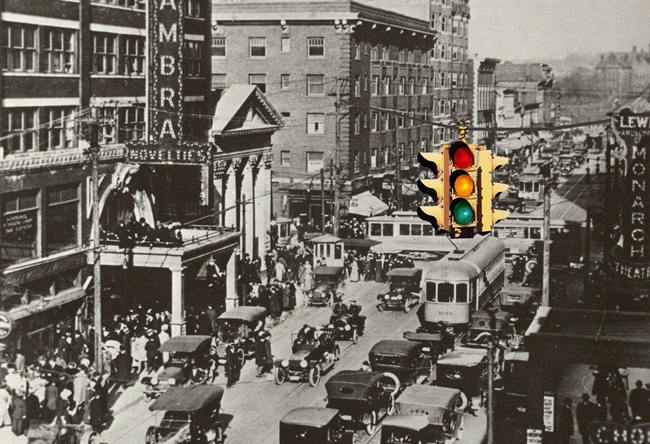 The design of the first traffic light is credited to Lester Wire, a Salt Lake City cop, whose idea of traffic control automation evolved into a momentous solution. Technically, it was London and Utah, not Cleveland, where manually operated traffic control systems were initiated but for a temporary period. It relieved traffic policemen of long hours of standing at intersections. The first electric traffic signal on one side of Euclid Avenue and East 105th Street in Cleveland transformed the ways of public life on roads across the globe.

The oldest electric traffic signal system is on display at a museum in Ashville, Ohio. Its installation cost $1,500 in 1914.

There was no yellow light in the first design. A series of buzzes and bells would mark the change of blue light into red light and vice versa. James Hope proposed to add a bell to the invention and suggested a way for manipulation of the lights by police in emergency cases. It eased the day-to-day lives of Americans by having transformed traffic chaos into controlled traffic movement, in pace with the wheels of civilization.

In 1920, yellow light was added to the first electric traffic signal in Cleveland. The traffic signal with yellow light was introduced to other cities including New York and Philadelphia. Booths were installed at an elevated level on one side of the intersections with traffic signals. A human operator was deployed in each booth to flip switching red and green lights. It brought respite to traffic police officers from the ordeal of standing long hours and suffering from vehicular emissions amidst crowds. 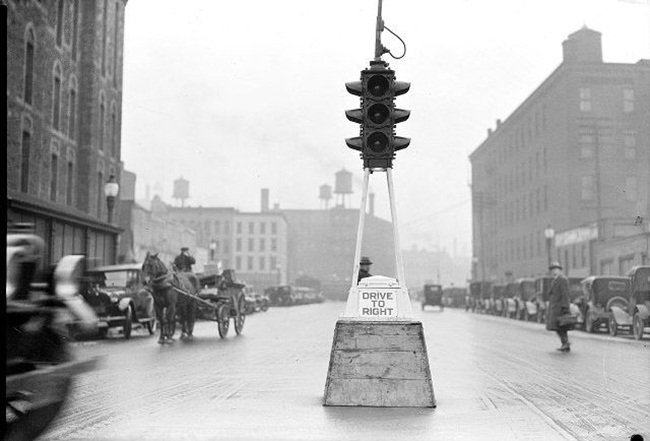 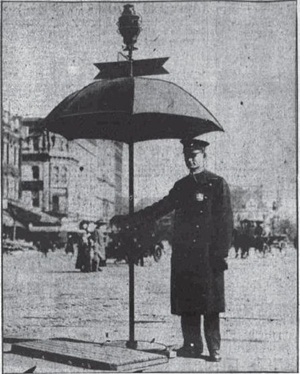 Automobiles began to hit roads in the U.S. in the 1900s. Owing to no system to control the pace of vehicles and ensure convenience of pedestrians, the vehicles running at breakneck speed caused deaths and crashes leading to roadblocks, which consequently drove the police to get into traffic regulation. In 1903, the police implemented a set of driving rules drafted by William Phelps Eno, a New York businessman, in many American cities. Other suggestions by him were traffic circles, one-way streets and pedestrian crosswalks.

Following William Phelps Eno’s idea of installing a post in the center of each intersection, New York City installed several posts with a sign conveying “Keep right,” which were referred to as “silent policemen”. Other American cities got the same infrastructure to control the pace of automobiles on their streets. These silent policemen fell short of applying brake to the rushing vehicles at busier intersections in downtown. Policemen of flesh and blood were deployed to control vehicular traffic with hand signals at those intersections.

London was far ahead of American cities in the history of traffic signals. London had got its first traffic signal using red and green gaslights at night, in 1868. It was inspired by a gas light installed to control horse traffic outside the Houses of Parliament. As there was no electricity, a police officer had to change lights manually. One night it burst out due to gas leak causing injuries to the operator after a month of use. Evidently, it was abandoned. England got its first electric traffic lights in 1926.

Indian Eagle books best flights to India from USA and connects Americans with Indians through interesting stories. The lowest airfare is a promise, not a seasonal freak!