Hopes never die! Though the “Fairness for High-Skilled Immigrants Act of 2019 (S.386)”, which sought elimination of the country-wise quotas for family and employment-based Green Card, has been stalled in the Senate to the dismay of Indian Green Card hopefuls and other nationals stuck in the Green Card backlog, Senator Dick Durbin’s new bill – RELIEF Act – has rekindled the dying hopes this Diwali. 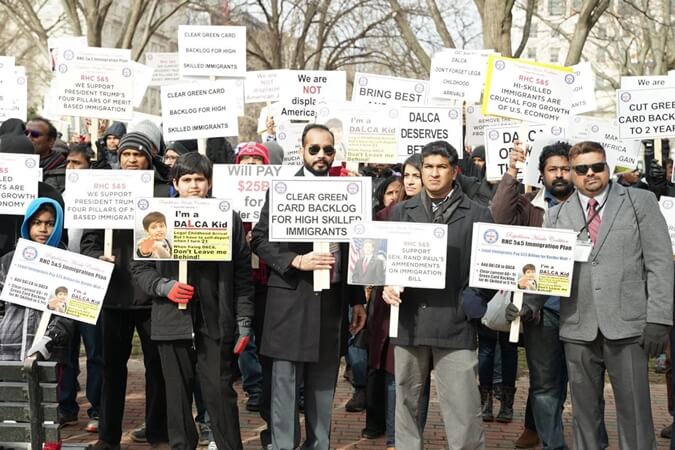 An Illinois Democrat, Dick Durbin who blocked the Fairness for High-Skilled Immigrants Act of 2019 in the Senate has introduced the Resolving Extended Limbo for Immigrant Employees and Families Act (S.2603) seeking an increase in the number of Green Cards issued every year through a proposed amendment of the Immigration and Nationality Act to end the immigrant visa backlog.

The Democratic whip in the Senate, Dick Durbin’s RELIEF Act proposes to classify spouses and children of Green Card holders as immediate relatives in order to help keep immigrant families together. The new bill for “green card backlog removal” also seeks to protect the aging out children (H4 dependents) of H1B visa holders by bringing them under the purview of legal permanent resident status, alongside proposing to clear the family and employment-based Green Card backlog over a period of 5 years.

Co-sponsored by Senator Patrick J. Leahy and Senator Mazie K. Hirono, the RELIEF Act is an alternative to the Fairness for High-Skilled Immigrants Act of 2019.

In response to the protesters who objected to his stance on the S.386 bill, Sen. Dick Durbin said that Senator Mike Lee sought to pass the “Fairness for High-Skilled Immigrants Act of 2019” bill without any debate or hearing, which is not the way the Senate works. The bill was passed by the House in July 2019 though.

Last Friday thousands of Indians took to the streets in Chicago protesting against the Green Card backlog. Even some 200 protestors confronted him at a Democratic Party event in downtown Chicago last Sunday, October 13.  “I didn’t run away from them, because I wanted to find out who they were, and why they were there. By and large they were people from India, currently living in the US and wanted to become legal citizens here. Most of them came to the United States bringing special skills that were needed,” said Durbin.

While introducing the RELIEF Act or Resolving Extended Limbo for Immigrant Employees and Families Act (S.2603), Dick Durbin alluded to his own immigrant roots. His mother immigrated to the United States from Lithuania in 1911. In his speech, he mentioned the plight of an Indian physician in Springfield, who has been endlessly waiting for a Green Card like other 520,000 Indians in the US. If his petition for legal permanent residency is not approved in next 10 years, his 11-year-old daughter will age out of the H4 status.

In the meanwhile, Apple CEO Tim Cook tweeted, “Immigrants make this country stronger and our economy more dynamic. As a first step towards the much needed comprehensive reform, I urge the Senate to move quickly to pass the Fairness for High-Skilled Immigrants Act. The contributions of these workers are critical to America’s future.”