Who These Six Indian Americans among the Awardees are

In 1996, the then President Bill Clinton commissioned the National Science and Technology Council (NSTC) to establish an award program in order to recognize the achievements by young researchers and their independent projects in the fields of science and technology. The Early Career Awards was institutionalized within the Executive Office of the US President.

Awardees are shortlisted from participants on the basis of their pursuit and purpose of innovative research in different disciplines related to science and technology. Their education, scientific leadership and community outreach are also taken into consideration for the award. 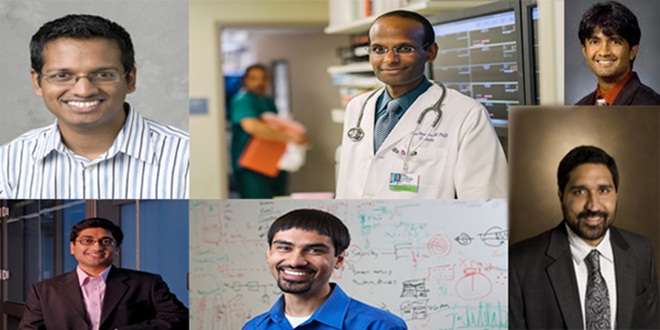 The young researchers on Barack Obama’s list of awardees in science and technology are accomplished professionals full of potential to take up challenges from climate change to health issues. “We congratulate these awardees and wish them to continue researching on their individual projects for better solutions to existing and impending threats to life, nature, environment and existence,” said President Barack Obama.

Among the six Indian Americans to be honored with the Presidential Early Career Awards 2016 is Milind Kulkarni. He is an associate professor with the School of Electrical and Computer Engineering at Purdue University. His research project involves Programming Languages and Compilers with focus on efficient programming and high performance.

Dr. Vikram Shyam is one of the NASA scientists among the awardees this year. His research is focused on technical innovation in fundamental aeronautics at NASA’s Glenn Research Center, Cleveland. His areas of work include computational analysis and conceptual development in biomimetic, energy harvesting, flow visualization and water purification.

Among the awardees for the Early Career Awards 2016, Shwetak Patel is a computer science and electrical engineering professor at the University of Washington. An eminent expert in sensor systems research, Shwetak Patel takes interest in research on Human-Computer Interaction, Ubiquitous Computing, Sensor-enabled Embedded Systems, and User Interface Software and Technology. Development of new sensing systems in connection with energy, water, health and interaction technology is his area of work.

Rahul Mangharam is an associate professor at the University of Pennsylvania. He conducts his research in the department of electrical and systems engineering. Researching on real-time scheduling algorithms for automotive systems, networked embedded systems, medical devices, and wireless control networks is his interest.

Among the Indian American researchers on the list of awardees for the Early Career Awards 2016, Sachin Patel is an assistant professor of Psychiatry, Molecular Physiology and Biophysics at Vanderbilt University Medical Center. The subject of his research project is the role of neuronal cannabinoid signal in the functioning of human brain with focus on psychiatric disorders.

Dr. Kiran Musunuru is an assistant professor of stem cell and regenerative biology at Harvard University in the US. He is also an associate physician. Genetics of cardiovascular and metabolic diseases is the subject of his research project. He has developed a ‘genome editing’ solution for reducing cholesterol levels permanently.

These six Indian Americans among the 106 awardees for the Presidential Early Career Awards 2016 belong to a new generation of accomplished scientists, engineers and researchers ensuring the growth as well as evolution of the United States as a leading innovator.