The current generation of Indians and NRIs who have grown up watching the popular TV series Mowgli based on Rudyard Kipling’s The Jungle book has eagerly been waiting for the release of Disney’s 3D animation film The Jungle Book starring 11-year-old Indian-American Neel Sethi from New York. The Hindi version of Walt Disney’s The Jungle Book will be released on April 8 in India and the English version will hit screens across the United States on April 15.

The film has already fired up excitement of the Indian audience around the voicing of the animal characters in the Hindi version by none other than such popular Indian actors as Priyanka Chopra, Nana Patekar, Irrfan Khan, Shefali Shah and Om Puri. The latest attraction of The Jungle Book is its dialogue writer and lyricist Mayur Puri, who has worked on several projects produced by Disney India, a subsidiary of the Walt Disney Company in the United States. 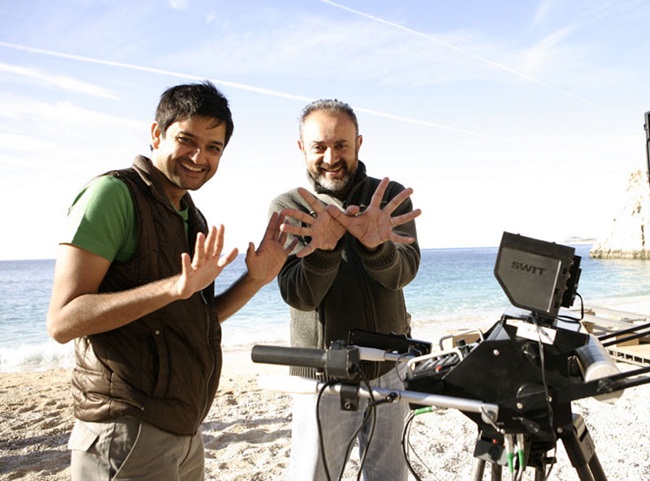 Mayur Puri (left) in the picture

Disney India has roped in lyricist and screenwriter Mayur Puri to pen dialogues and lyrics for the Hindi version of The Jungle Book. Mayur Puri who got a break as assistance director in the entertainment industry of India debuted into screenwriting with Bollywood film Mere Yaar Ki Shaadi Hai by Yash Raj Films in 2002. Born in Ajmer, Rajasthan and brought up in Ahmedabad, Gujarat, Mayur Puri had an adventurous beginning when he decided to move from Ahmedabad to Mumbai. Naturally, he connects with the adventures of Mowgli in The Jungle Book.

However, Mayur came into limelight as screenwriter of blockbuster Om Shanti Om starring Shah Rukh Khan and Deepika Padukone in 2007. His screenwriting for Om Shanti Om catapulted him to fame as some of the dialogues like ‘Ek Chutki Sindoor’ and ‘Picture Abhi Baaki Hai Mere Dost’ became a huge hit. These dialogues are still very popular.

For the first time, he has donned the hat of a screenwriter and lyricist for the Hindi version of such a topnotch 3D animation film as Walt Disney’s The Jungle Book made in Hollywood though he worked as creative director for an animation film named Jumbo in 2008 and co-wrote the screenplay of Blue, the first Indian film about an underwater adventure. He is full of excitement also because his dialogues have been voiced by Priyanka Chopra, Nana Patekar, Irrfan Khan, Shefali Shah and Om Puri.

As a kid, I was captivated by the adventures of Mowgli and other characters in the animated world of forests. Obviously, it’s a great opportunity for me to write the Hindi dialogues of The Jungle Book. I have penned the dialogues and lyrics keeping the Indian audience in mind. – Screenwriter Mayur Puri

What he found the most challenging about his work in the Hindi version of The Jungle Book is penning Hindi songs for the film. He had to make sure that the songs would resonate with today’s children and teens. He hopes that the audience will feel a strong connect with Mowgli through his dialogues and lyrics which are replete with humor in the Indian context.

The screenwriter of Salman Khan’s Bajrangi Bhaijaan, a 2015 Bollywood blockbuster, is none other than Mayur Puri. He founded a storytelling institute for young children named Story Circus. Currently Mayur is working on his directorial debut film alongside keeping a watch on the countdown for the release of The Jungle Book in India.

Travel Beats is a fast-growing digital portal by IndianEagle in travel, tourism, aviation, culture, entertainment and news for Indians and NRIs. IndianEagle publishes the latest news and interesting stories on Travel Beats.