After years of construction delays and other hiccups, Washington Dulles International Airport gets a metro station and a direct rail link to downtown D.C. on November 15. The official opening of Washington Metro’s Silver Line phase 2 that extends into Fairfax and Loudoun counties makes it possible for tens of thousands of travelers to easily connect to and from Dulles Airport. Now the travel time between central Washington D.C. and Dulles IAD Airport is less than an hour. only 53 minutes. 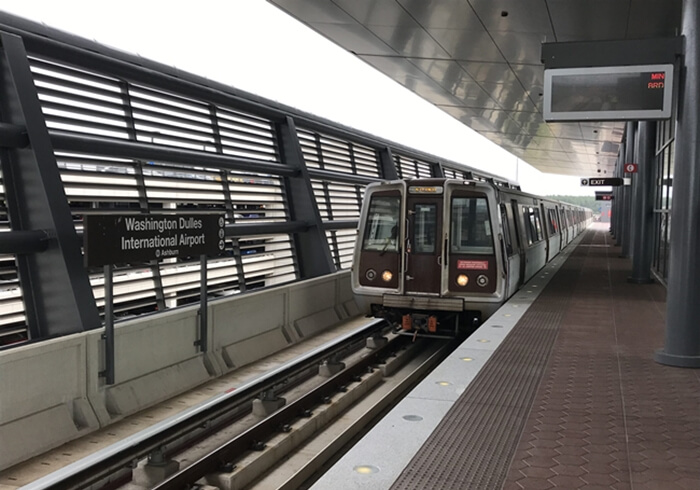 A 5-minute walk via a subway will take you to Dulles Airport Metro Station from the baggage claim area, which is accessible to all inbound and outbound travelers. Not only travelers from the US Capital, but also those from Ashburn and Fairfax can now take a train to catch their flights at the biggest international airport in the Washington Metropolitan Area. Other than Dulles, the five new metro stations on the 11.5-mile Silver Line extension are Reston Town Center, Herndon, Innovation Center, Loudoun Gateway, and Ashburn.

Saddled with jet lag on long-haul international flights to DC Airport IAD, you can travel 28 miles to downtown D.C. on the Metrorail in only 53 minutes and spare yourself from the maddening road traffic, especially during peak hours of the day. Thanks to the $3 billion project for the DC Metrorail System’s Silver Line phase 2 extension that was approved in 2004. Actually, it took the airport 45 years to get metro rail connectivity even though the D.C. Metrorail transit system was opened in 1976.

Interestingly, various proposals to improve the airport-bound passenger experience are being weighed in. You may be able to check in your bags at the Washington Dulles Airport Metro Station in the future.