More and more Indian Americans in philanthropy are connecting with their roots and giving back to their native communities in a number of ways. Whether it is Washington-based Frank Islam or Ruchita Zaparde from New Jersey or Robin Chaurasiya from Chicago, they are making positive changes in the lives of less or underprivileged people in India through philanthropic activities at different levels.

17th-year-old Devika Chhipa Kumar from Austin, Texas, is the newest in the league of Indian American philanthropists. A 12th grader at Westwood High School in Austin, Devika along with her parents is currently touring the rural interiors of Rajasthan for an important cause. She is on a mission to educate the socio-economically less privileged women and girls of different age groups about the importance of menstrual hygiene for better health. 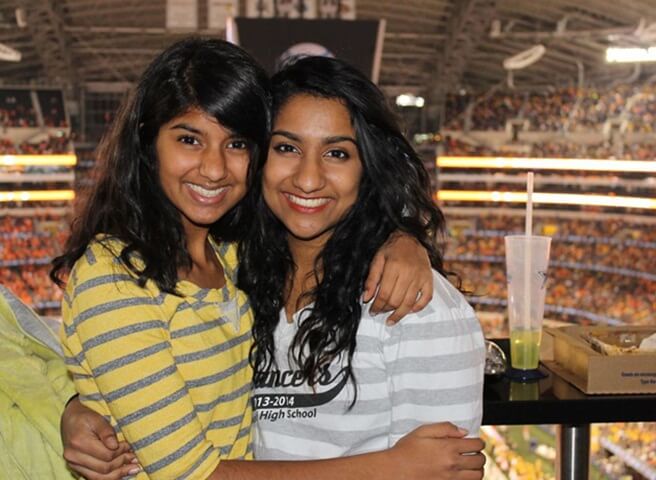 Devika Chhipa Kumar has installed cost-effective sanitary pad manufacturing machines in five villages under the Dityakheri panchayat in Jhalawar district of Rajasthan where her father, an IIT-Kharagpur graduate, belongs to. The initiative, a part of her Girl Scout project, will not only sensitize the rural women about the matters related to menstrual hygiene but also provide them with a means of sustenance in her ancestral village.

Inspired by South Indian engineer Arunachalam Muruganantham’s revolutionary invention of a low-cost sanitary pad-making machine, Devika plunged into philanthropy for spreading awareness on menstrual hygiene and started raising funds from friends as well as relatives. Currently five women are under training to operate the machine. Once their training is over, more women will join the project.

A regular sanitary pad usually costs INR 5 whereas the same pad is manufactured for only INR 2 by the machine. The machine consisting of five units manufactures six sanitary napkins in 15 minutes. The women of the socio-economically weaker section can make, use and sell those cost-effective pads. – Devika Chhipa Kumar

Around 23% of teenage girls in the 12-18 age group quit school in rural India when they attain puberty due to ignorance about menstruation, inadequate menstrual protection and other reasons. A study “Sanitary Protection: Every Woman’s Health Right” reveals that only 12% of 355 million menstruating women in India can afford hygienic sanitary napkins while 70% can’t. Around 56% are told that menstruation is a health disease, a social taboo…

17-year-old Indian American Devika Chhipa Kumar from Austin believes that the success of the project in her father’s native village in Rajasthan will drive the menstrual hygiene awareness campaign in other parts of India.