From serving in the Indian Army for a salary of Rs 450 to making charitable giving worth millions of dollars in the US, Dr. Rajinder Pal Singh Bhalla’s journey is an inspiring tale of American Dreams. A resident of Houston, this 90-year-old Indian American is an active community leader embodying the cultural values of India and the principles of Sikhism in his way of life. The former president of the India Culture Center, Dr. Bhalla is the first to have received the Community Service Award from India House in Houston.

Recently, his joy of giving became the talk of the town as he made headlines for donating US$1 million to several nonprofits in the United States. Reportedly, he and his spouse made a list of nonprofits in and around Texas over the past few months. The India Culture Center, Houston Food bank, Houston Methodist Hospital Foundation, Kennett Education Foundation, Gurudwara Sahib of Southwest Houston, and Sugar Land Legacy Foundation are among the nonprofits on their list. 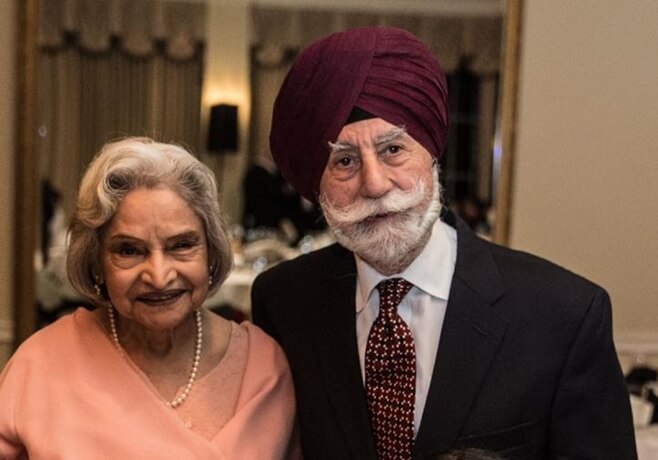 In August, Dr. Rajinder Pal Singh Bhalla started calling the nonprofits on his list and surprised the managing director of the Houston Methodist Hospital Foundation when he told her about his plans to donate $50K to the foundation. “At the end of the day, how much money do you need? There comes a time when you realize you have enough,” said Dr. Bhalla.

Though he is not among the richest Indian-origin Americans, Dr. Bhalla believes if there is a will for giving back there is a way. He started pursuing philanthropy before he retired in 2006. The Bhalla couple donated to help set up a chemistry lab where he was schooled in India and sponsored an ICU at a hospital in Ferozepur.

The 16th direct descendant of the third Sikh Guru, Guru Amar Das, Dr. Bhalla was initiated into serving the mankind when he was in the Indian Army. His father was a captain in the Indian Army Medical Corps. Inspired by his father’s service, he became a veterinarian lieutenant in 1953 after he completed veterinary studies at Punjab Veterinary College.

Dr. Rajinder Pal Singh Bhalla came to the US in 1960 when an opportunity from the Government of India came his way to do masters at the University of Minnesota. He returned home after one year as he was serving in the Army. Smitten by American Dreams in his early 30s, he took voluntary retirement from the Army, went back to the US with his family and settled in Long Island, New York. Raj started working at Charles River Labs in Port Washington, NY while his better half opened an Indian eatery called Paul Bhalla’s Cuisine of India. New York was their home for 10 years.

The philanthropist Bhalla couple pursues philanthropy with equal passion in India where they belong to and the US where they found home away from home. In 1989, they instituted a cash award of Rs. 25,000 and two silver trophies as annual awards in gallantry, equestrian sports, veterinary research, and professional innovation. One of the trophies is awarded to an officer, and the other is presented to a junior commissioned officer.

In 2006, they donated $20,000 to help with relief efforts in the tsunami-hit Indonesia. Dr. Bhalla’s heart missed a beat when a New York Times article about a man having bartered his two kids for bags of wheat not only redefined poverty but also pierced him in 2002. He contacted the New York Times and talked to the writer of the article to know how he could send financial help to the family.

This exclusive story, part of our continued series of inspiring stories about Indian Diaspora, is brought to you by Indian Eagle, a trusted travel booking partner of Indians in the USA. Travel Beats, a leading overseas Indian community portal, is a subsidiary of Indian Eagle Travel. Subscribe to our free newsletter and stay tuned to latest community stories, US visa and immigration news, and updates on travel to India.