Home / Features / Air India Hostesses: Most Glamorous Women of the 60s and 70s with Dark Side to Their Jet-setting Career

In the golden age of air travel, Air India was far ahead of its contemporaries, including British Airways and American Airlines. Today’s cash-strapped airline was once unrivaled in advertising its uniqueness, selling its flights, pampering travelers on board, perfecting every detail, and pooling air hostesses. So unapologetic was legendary aviator JRD Tata’s obsession with perfection and excellence that first-time flyers were required to be familiar with “Air India etiquette” regarding dress code, bathroom manners, dining manners and on-board behavior through an illustrated booklet called ‘Better Acquainted.’

Though the Maharaja (male emperor) became the mascot of Air India in 1946, it was the finest breed of air hostesses in flamboyant uniforms and with an inimitable aura of sophistication, who held the attraction of Air India flights in the bygone days. The glamour of ‘Air India women’ and the luxury of flying the national airline were synonymous back then. 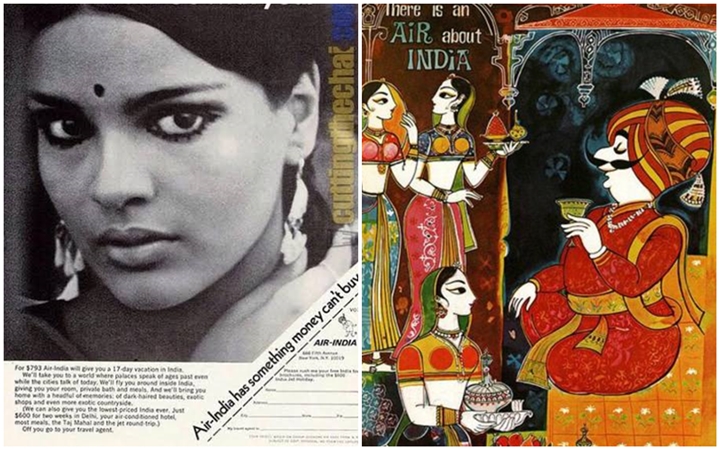 In the pre-liberalization era of free India, Air India was liberal in featuring sensual dusky beauties in some of the best advertisements with bold slogans, which was unimaginable for rival airlines of the time. Shrugging off every bit of conservatism, Air India made Zeenat Aman, the Miss Asia-Pacific 1970 and a dusky sensation of her time, the face of one such historic advertisement in a country like India where ubiquitous obsession with fair skin was compounded by the launch of Fair & Lovely (a fairness cream) in 1975.

The 1970 advertisement of Air India featuring Zeenat Aman promised, “Long after you leave India, India will still be with you. We will bring you home with a headful of memories; of dark-haired beauties….Air India has something money can’t buy”.

In its good old days, Air India was known for reversing a trend and swimming against the waves. The airline introduced Anglo-Indian air hostesses with the then western look comprising tailored European dresses and jaunty angled caps in 1946 when sari-clad common Indian women took to streets and joined their male counterparts in demanding uprooting of the British rule. 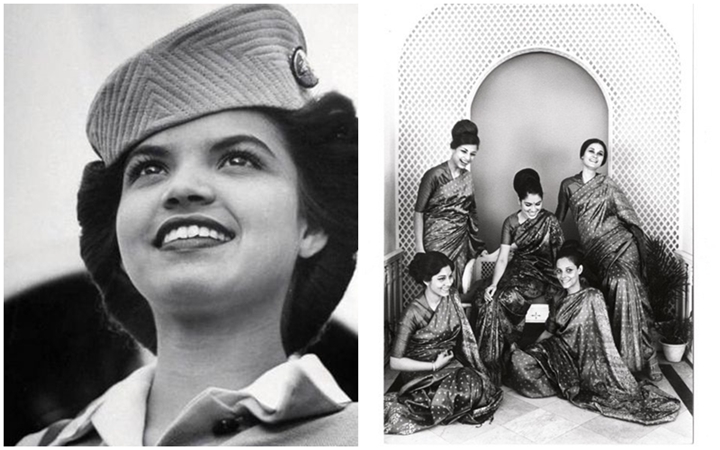 The fashion of Air Indian hostesses remained westernized for two decades until saris were adopted as part of the rebranding of Air India in foreign newspapers and magazines, at the beginning of the 1960s. Again, the airline went against the wind introducing silk saris for air hostesses in the heyday of miniskirts and bell-bottoms. While an Air India ad featured a sari-clad air hostess to woo Indian diaspora in the United States, actress Jayanthi and Jayalalithaa (late chief minister of Tamil Nadu) became the first to wear miniskirt in India.

From the 1950s through the 1980s, ‘Air India girls’ (as young air hostesses are still referred to) were so elite, elegant and smart that every wealthy bachelor in India wanted to marry them. They made headlines not only for their vivacity, confident poise, exotic holidays and foreign shopping, but also for their affairs with industrialists or film stars in those days when middle-class Indian women were reluctant to step out of their homes. They owed their glamour and sophistication to JRD Tata’s steadfast attention to their hairdos, dressing style, service etiquette, accent, poise, etc. Being an Air India hostess was a matter of pride, prestige and envy in the golden age of air travel.

Very unlike today’s bikini airline (low-cost Vietnamese carrier, Vietjet), Air India featured its traditionally dressed air hostesses in some of the best advertisements with bold slogans such as “Next time you fly 747 to New York, be unfaithful.” 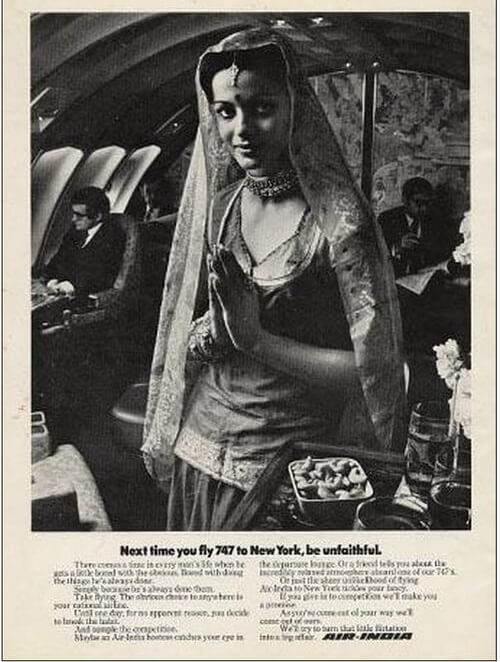 Just like the other side of a coin, there was a dark side to the glamorous career and jet-setting lifestyle of Air India hostesses in the golden age of air travel. The national airline was not a shining example of gender equality until almost a decade ago. The well-bred and impeccably trained air hostesses had to stand united against the airline’s gender discrimination policy, which has been common to most of the state-run enterprises in the world, in the pre-social media era.

They fought their way through the court to do away with such issues as a different retirement age for Air India’s male and women crew members, and unjust treatment of women in executive positions as subordinates to their male colleagues on board. In the 1960s, Air India hostesses had to retire at the age of 30 or by the time they got married – whichever was earlier. In the 1970s, their retirement age was raised to 35 years or the first pregnancy. Strong protests led to the stipulation of 45 years as their retirement age in the following years (depending on medical fitness).

The Air-India Cabin Crew Association (AICCA) once said, “This retirement age is for their (women crew) benefit, as they wish for a peaceful and tension-free life at home with their families in their middle age.”

Even in the first decade of the 21st century, they knocked at the courts to eradicate the policy that penalized women crew if they were found overweight during a pre-boarding weight check, but permitted the overweight male crew members to fly and exempted them from any sort of penalization. Air India’s women crew members above 35 years had to comply with the compulsory annual norm of undergoing an internal gynecological examination. They were allowed to bear only two kids, while there was no such obligation for the male crew.

The last battle that ‘Air India women’ fought for equal rights was to move the airline to end the rule that reserved the ‘in-flight supervisor’ designation for men though women cabin crew members had the same training. Ironically, senior women cabin crew members had to serve under the men who they had trained; it was because ‘in-flight supervisor’ was a male-only designation. In 2005, the Delhi High Court’s verdict in favor of the women cabin crew was opposed and challenged by the male cabin crew. Notably, the Supreme Court upheld the Delhi Court’s judgment in 2011.

“Glorified ayahs” and “hawayi sundaris” were the nicknames in contrast for Indian air hostesses including ‘Air India women’ as it was said that young and beautiful girls were recruited to serve passengers and be the face of airlines, until 23-year-old Neerja Bhanot’s heroic act and tragic death on the line of duty in 1986 changed the notion to ‘an air hostess could also be a hero.’

Anyway, things have changed for the better over the past few years. Currently, India has a maximum number of women pilots in the world, which tens of Air India’s all-women-crew flights worldwide, including the longest Delhi to San Francisco flight, on International Women’s Day bears a testimony to.

This exclusive story about the bygone old days of cash-strapped Air India is brought to you by Indian Eagle Travel, as a flashback into the history of struggles that Air India’s women crew did demanding for equal rights and gender equality – which the current generation might not know.

One thought on “Air India Hostesses: Most Glamorous Women of the 60s and 70s with Dark Side to Their Jet-setting Career”