Three Indian American teens bagged the top prizes in the 2018 National Geographic Bee competition held in Washington DC, to the utter pleasure of Indian Community in the United States. Venkat Ranjan from California, Anoushka Buddhikot from New Jersey and Vishal Sareddy from Georgia took the nation aback by winning the first, second and third scholarship awards at the 2018 Nat Geo Bee competition. 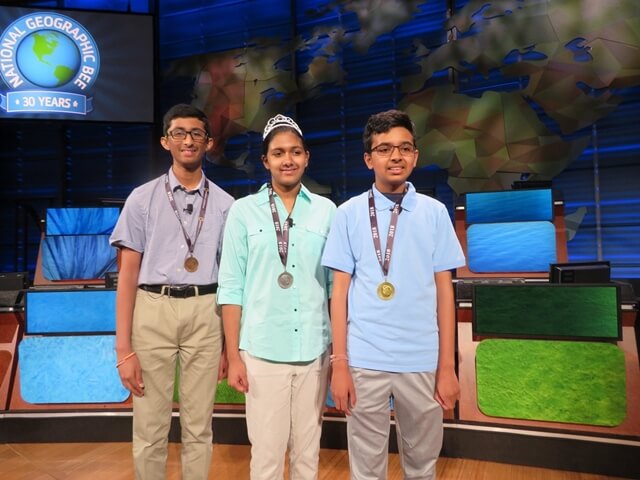 13-year-old Anoushka Buddhikot of New Jersey and 14-year-old Vishal Sareddy of Georgia – the second and third place finishers in the 2018 National Geographic Bee – have been awarded $25,000 and $10,000 respectively. $500 was given to each of the ten winners, on completion of the preliminary round.

Though Venkat Ranjan’s answer to the first question was wrong in the preliminary round, his correct answer to the final question “Lebanon has a population most similar to which South American country?” earned him the 2018 National Geographic Bee championship. The answer was Paraguay, which he guessed by eliminating the other options. His three-year long preparation for the competition bore the fruit.

While Venkat Ranjan’s favorite subject is science, the runner-up Anoushka Buddhikot takes pleasure in reading history and the third ranker Vishal Sareddy finds geography interesting. Since the 4th grade, Anoushka had studied for hours even on holidays to prepare for the competition. One of the two female finalists in the 30th annual National Geographic Bee competition, she is an 8th grader at Bridgewater-Raritan Middle School in New Jersey. Vishal too is an 8th grader at Riverwatch Middle School in Suwanee, GA.

It is remarkable that about 30% of the 54 state bee winners who participated in the finale of 2018 National Geographic Bee were Indian Americans. 2.6 million students from more than 10,000 schools in all of the 50 US states participated at the initial phase of the competition this year. 8 out of the 10 finalists in the championship round were of Indian origin in the United States where the Indian American community forms only 1% of the total US populace.

This news story about the 2018 National Geographic Bee winners including Venkat Ranjan is part of our continued effort at Indian Eagle to promote the achievements of Indian Americans and young Indians worldwide. Subscribe to our free newsletter for inspiring stories of young Indians in USA.