Pakistan extended the closure of its airspace for flights to and from India till June 28. Adding to the ordeal of traveling extra hours on certain international flights to and from India is the current US-Iran tension. Following United Airlines’ temporary cancellation of Newark-Mumbai flights in the wake of the US-Iran tensions, other major airlines including Air India, British Airways, Etihad and Emirates Airlines are exercising their discretion in ensuring safety of their passengers.

Currently, the Iranian airspace and the Strait of Hormuz lying between the Gulf of Oman and the Persian Gulf are the prohibited zones, due to military tensions, for several airlines including Air India, of which Newark to Mumbai flights are operated over Iran. The brutal shooting of Malaysian Airlines flight MH17, killing all 298 people on board, under the wrong impression that it was a military aircraft over Ukraine does still stick to the global conscience. 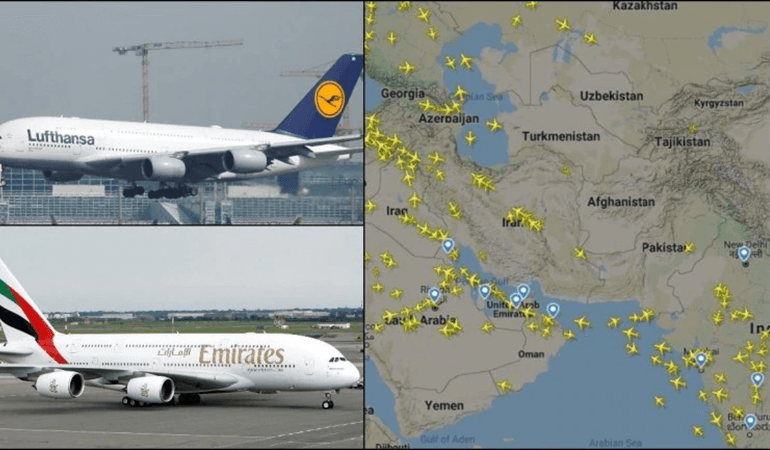 The US aviation regulator, Federal Aviation Administration (FAA) issued an emergency directive to all US airlines barring their flights from approaching Iranian airspace, which also sent an alert to non-US airlines resulting in rerouting of certain international flights. Following suit, the Directorate General of Civil Aviation (DGCA), India ordered Indian airlines to avoid the affected parts of Iranian airspace.

Rerouting of flights in a bid to avoid Iranian airspace and the Strait of Hormuz means increased travel time and a possible hike in airfares. Rerouting of Air India flights to the US and the UK has been incurring a daily loss of INR 6 crore to the airline due to the Pak airspace closure since February this year.

In response to the wake of US-Iran military tensions, Air India’s Chairman Ashwani Lohani remarked that rerouting of flights won’t have ‘substantial effect’ on Air India’s passengers to and from USA, Israel and Europe. Aviation experts contradicted it and said that taking a longer route to avoid Iranian airspace would definitely raise Air India fares from USA to India as a result of an increase in the airline’s operating costs.

Other Indian airlines including IndiGo have decided to reroute their West-bound flights to ensure safe travel for passengers, according to the DGCA.

British Airways, which operates flights from USA to Bangalore, Chennai, Hyderabad and Mumbai through the Middle East airspace, has already changed the route of some of its flights. Lufthansa and KLM Royal Dutch will reportedly reroute their flights from New York to Mumbai, India for the same reason.

The UAE airlines – Etihad and Emirates – announced their decision to bypass the Strait of Hormuz and the Gulf of Oman for their flights between the West and the East. Emirates Airlines has already take precautionary steps to keep its flights away from Iranian airspace. Emirates’ US to Dubai flights have been rerouted bypassing the areas of military conflicts.

Considering safety of passengers as a topmost priority, Etihad Airways has changed a number of flight paths, including that of New York to India and Washington Dulles to India, following the US FAA’s emergency directive to US airlines. “These changes will affect flight schedules due to increased congestion in the available airspace, and that in turn will increase travel duration on certain routes,” Etihad stated.