Home / Places / Yadadri: A Tirupati-like Temple Town is Coming up near Hyderabad for INR 1800 Crore in 2022

India is on a temple construction spree aiming to harness the economic potential of religious tourism. These days, temples not only draw pilgrims but also fetch tourists in general. With new temples coming up as tourist attractions, India is all set to redefine pilgrimage as socio-religious tourism.

A 1000-year-old cave shrine in the scenic hills on the outskirts of Hyderabad City, the Yadagirigutta Temple is getting a makeover as grand as the Tirupati Tirumala Temple in Andhra Pradesh. The estimated cost of the makeover comprising wide-scale renovation and expansion of the Yadagirigutta Temple is INR 1800 crore, which is nearly three times more than the cost of the Vrindavan Chandrodaya Mandir in Mathura, the world’s tallest temple under construction. 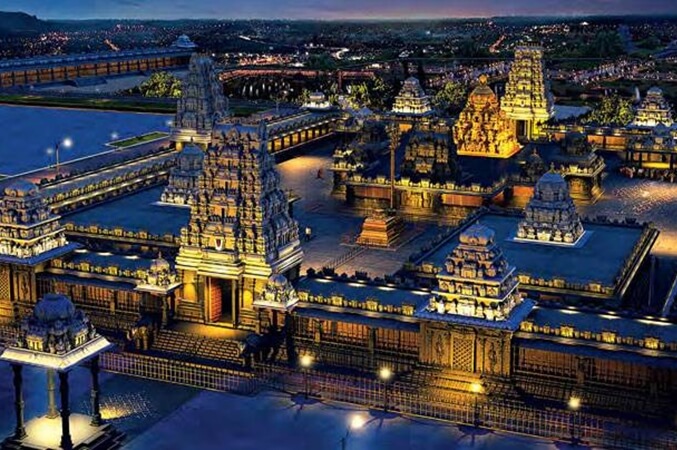 It is said that the ongoing inch-by-inch and brick-by-brick transformation of Yadagirigutta into a Tirupati-like temple town and spiritual capital is Telangana CM K Chandrasekhar Rao’s pet dream. A 2-hour drive (60 kilometers) from Hyderabad, the Lakshmi Narasimha Temple of Yadadri is a hilltop shrine dedicated to the half-lion-and-half-human incarnation of Lord Vishnu. Yadadri is surrounded by eight other hills and lush forests.

The Telangana government came up with the plan to develop the Lakshmi Narasimha Swami Temple of Yadagirigutta into into a world-class pilgrimage hub, in 2015. The Yadagirigutta Temple Development Authority (YTDA) headed by CM K Chandrasekhar Rao is at the helm of this multi-crore project. YDTA roped in renowned architects, sculptors and builders from across the country for the historic transformation of not only the temple, but also the temple town.

The government of Telangana formed a special body of advisors including S. Sundara Rajan, an eminent temple builder and Anand Sai, a renowned art director. S. Sundara Rajan, who is the Engineer-in-Chief of the 1800-crore project, has the rare distinction of constructing 4500 temples across India, including the Gopuram at the Sri Kalahasti temple in Chittoor of Andhra Pradesh.

The upcoming Yadadri Temple Complex will spread over 14.5 acres on the top of a hillock in Yadagirigutta. The new complex of Yadagirigutta Temple will have seven temple domes (Gopuram) with wooden roofing, including a 100-foot dome which will command views from a considerable distance. A 1,400-acre part of the complex will house tourist facilities including cottages for tourists, a multilevel parking lot for 7000 vehicles, and housing for the temple priests. The construction of the domes was completed early this year. 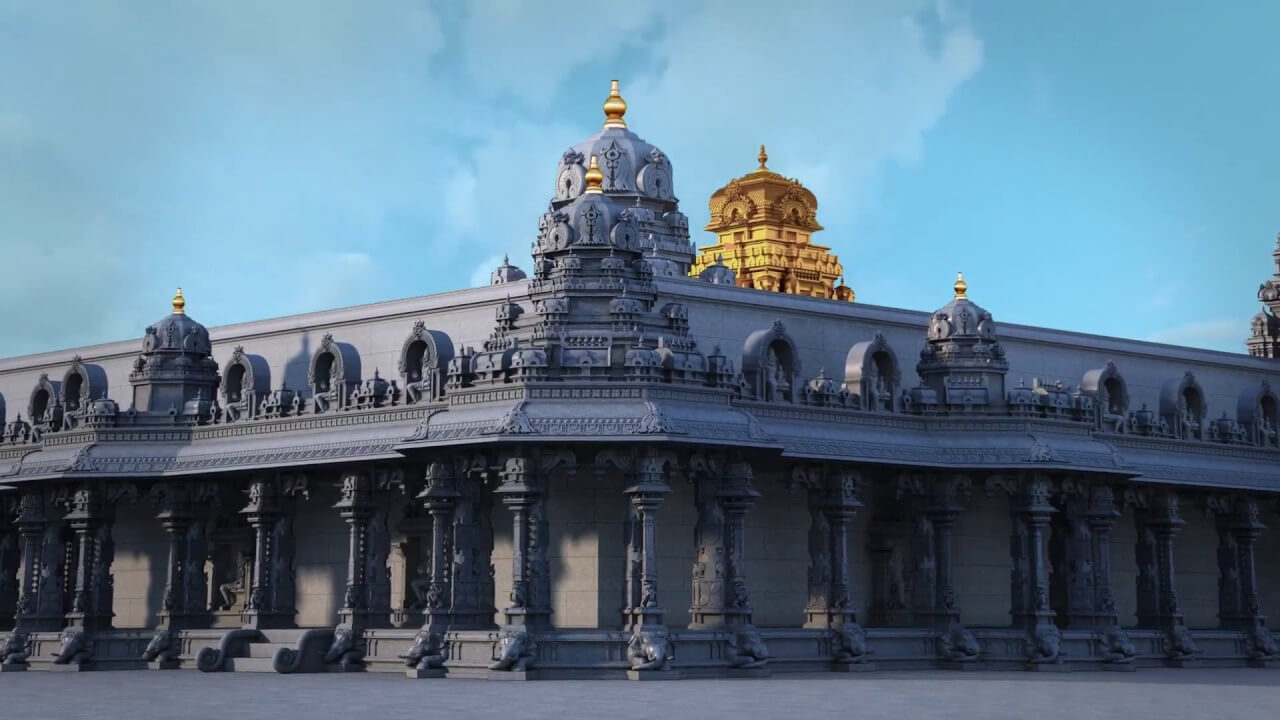 Notably, more than 500 sculptors have been employed to carve delicate sculptures and designs on pillars in the Yadadri Temple Complex. They are also engaged in carving statues out of stone. The whole temple complex, including the interior and the exterior, has been made of black granite stone as per the temple architecture of the Kakatiya Dynasty in Telangana. Black granite stone has very small pores. The stone becomes strong and hard when milk, curd, oil and other liquids get into pores, according to experts.

A 2.7 km road has already been constructed around the hillock named Yadadri, where the Lakshmi Narasimha Temple complex is coming up, for devotees to do pradakshana (circumambulate), a sacred ritual. Four-lane roads are under construction in the downhill area for smooth connectivity. The project, which was supposed to be completed in 2021, is currently currently getting a finishing touch. Reportedly, 2022 will see the inauguration of the new temple complex.

Explore Temple Trail from India to USA with Indian Eagle

Besides the Yadadri Temple Complex under construction on the top of the hillock, the downhill area is undergoing complete transformation to be shaped as a temple town. Several different structures and facilities including a lake, marriage halls, food courts, a shopping complex and a bus depot will come up across 2,000 acres in the downhill area. The temple city of Yadadri will get VVIP quarters on a hillock adjoining the Yadagirigutta hillock, and a 25-acre horticulture park where different flowers will be cultivated for daily puja at the temple.

“Once the project is finished, Yadadri is going to be as big as Tirumala, with even better facilities and structures. The footfall will go up from 10,000 to 30,000 a day.” said G Kishan Rao, Vice-Chairman and Managing Director of the Yadadri Temple Development Authority.

With an expected rise in the number of daily visitors, the annual revenue of the Yadagirigutta Temple is likely to shoot up from INR 80 crore per year to INR 200 crore per year, according to the temple authorities. The critics of Telangana government opine that it is next to impossible for Yadadri Temple to make even 10% of the Tirumala Temple’s annual revenue which is an average of INR 2600 crore.

However, there is no doubt that the Yadadri Temple Complex and City project, once completed, will trigger a commercial boom in and around Yadagirigutta by catapulting religious tourism to new economic heights.

How to Reach Yadagirigutta or Yadadri Temple from RGI Airport

One thought on “Yadadri: A Tirupati-like Temple Town is Coming up near Hyderabad for INR 1800 Crore in 2022”