Home / Festivals / Know Why You Should Visit Kerala in June

If you are flying to Kerala in India the coming week, a great Indian festival is awaiting you. Curious to know which festival I am talking about? It is the Champakulam boat race festival in Kerala. You might have visited many beach festivals and seen crowds of merrymakers in water parks, but the boat race festival of Kerala is an absolutely different experience that you must have once in your lifetime.

You may wonder if a flight to India from the USA or Canada is worth considering for a visit to this Kerala festival. I must say a hundred times, “Yes” it is. One of the most-awaited and thrilling annual Kerala events, the snake boat race on the Pampa River is held in the month of June. Hundreds of snack boats driven by thousands of men crisscross the river and raise waves on the surface.

The men participating in the race and pulling the boats brim over with lots of enthusiasm which is a rare glimpse to catch on anywhere else. The beauty of decorated, snake-shaped boats running and racing on the blue surface of the river is an ideal spectacle for photography. The Champakulam boat race festival in the Alappuzha district of Kerala is a great fun to catch on this June. 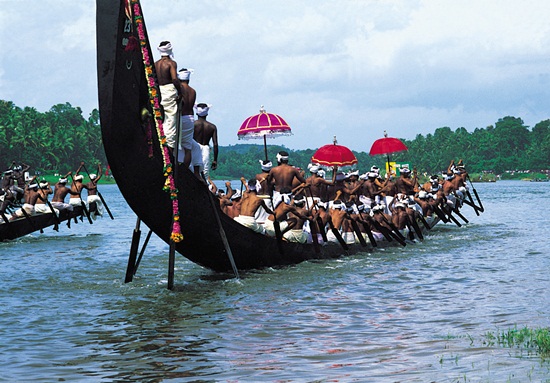 If this is not enough to satisfy your curiosity, there is a legend about the inception of Champakulam boat race festival to share with you. The legend dates back to centuries when the King Devanarayana of Chempakasseri was instructed by a priest of high order to build a temple in honor of Lord Krishna in his kingdom, Ambalappuzha.

The King embarked on a voyage to the Karikulam temple in Kurichi to bring the Lord Krishna idol which is supposed to be gifted to Arjuna by Lord Krishna himself. On the way back from Kurichi, the King and his men paused at Champakulam during the night. The next morning they saw to their utter surprise that hundreds of colorfully decorated boats appeared from nowhere in order to escort the idol to the kingdom.

The day became part of the age-old Kerala history. Thus the Champakulam boat race which was initiated to commemorate the sacred day every year evolved into a festive tourist attraction. The festival is inaugurated with performing arts of Kerala, God’s own country. A prime highlight of Kerala tourism, this grand water festival is scheduled to be held on June 23 this year.

It is a brief overview of the Champakulam boat race festival. Flight to Kerala is a must to catch a life-size picture of the festival. After all, only eyes can behold the truth. Apart from the festival, Kerala, God’s own country, is an all-time visit for beautiful backwaters, balmy beaches and mystic valleys.