India is a land of diverse geographical features on planet earth. Some parts are rocky; some parts are snowy; some parts are watery; some parts are sandy. The only thing that all these different parts of the country are unified by is the beauty of culture. The festivals of India showcase the country’s cultural beauty in kaleidoscopic forms. One such Indian festival is the Hemis Festival of Ladakh in the state of Jammu and Kashmir.

The Hemis Festival, a major draw of the local Buddhist culture for tourists and pilgrims, is celebrated at a Hemis monastery in Ladakh. “Far from the madding crowd”, Ladakh at an altitude of 3505 meters is cradled in the lap of snow-caped mountains, close to the domain of clouds. June is the best month to visit Ladakh not only because of pleasant weather but also the Hemis Festival. 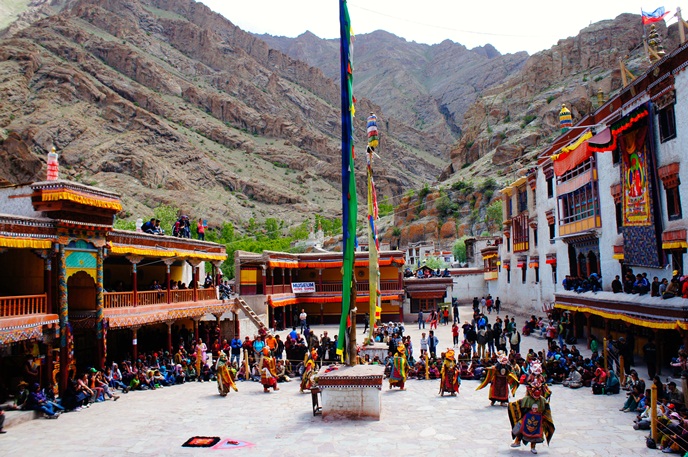 This summer festival of India is held in celebration of Guru Padmasambhava’s birth anniversary, in the third week of June, at Hemis Gompa. Hemis Gompa is the largest Buddhist monastery with a sprawling courtyard where the rituals of the festivity are ceremoniously performed. This Ladakh monastery housing 500 monks is the seat of Tibetan Buddhists in India. It preserves a few hundred years old artifacts and paintings which make a rare collection.

A chapter of Ladakh’s history, the foundation of Hemis Gompa dates back to the 11th century. Subject to successive invasions from Muslim rulers from the West, the monastery flourished during the regime of Sengge Namgyal, the monarch of Ladakh, in 1630. It has evolved into a prestigious center of Buddhist religion and culture over the years. The rich fresco work on the walls of verandahs depicting the Buddhist’s wheel of life steals the show.

The Hemis Festival is a 2-day long cultural extravaganza. The courtyard remains abuzz with ceremonies and agog with fun activities for two days. The mask dance performance, locally known as ‘chams’, is the main attraction of this Buddhist festival. The moment the celebration hour cloaks in, the Lamas appear wearing colorful masks and dancing rhythmically on the courtyard. They dance in tune with the beats of drums and cymbals. 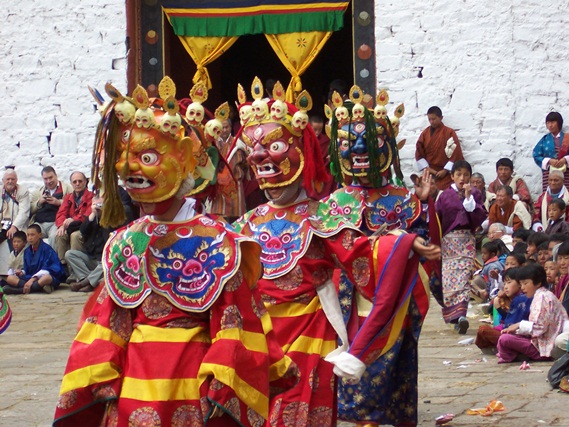 The dancing Lamas are believed to perform a play depicting the triumph of good over evil through their rhythmic movements. The dancer performance is followed by the destruction of an effigy that stands for evil. According to the legends of Ladakh, Lord Padmasambhava who is said to be the founder and savior of Tibetan Buddhism had fought with demons to save the local people. He had also struggled to improve the spiritual shelves of the followers of Buddhism.

The Festival of Hemis is the best opportunity to enjoy the hilly beauty of Leh, explore the legends of Ladakh, interact with the local Buddhists and admire their cultural glory. The festival is scheduled to be held on June 18 and 19 this year.

Hemis Gompa is located at a distance of 45 km from Leh, the capital of Ladakh. Leh is just a flight away from New Delhi, the capital of India, and New Delhi is connected to all international destinations of the world by air. Respond to the call of Ladakh, and book you flight with the lowest airfare on IndianEagle.com.