Home / Features / Geetha Feels Like a 20-year-old in Her 60s while Traveling; Thanks to Her Son who Says Mom is His Best Travel Buddy

“I didn’t know what I had been missing all these years. I am 60, diabetic and hadn’t hoped to see the world at this age. But now I am extremely happy and keep planning the next journey. My prayer now is to get my life extended by a few more years than destined,” Geetha Ramachandran, who is 64 now, said during an unexpected trip to Mount Kailash in Tibet. 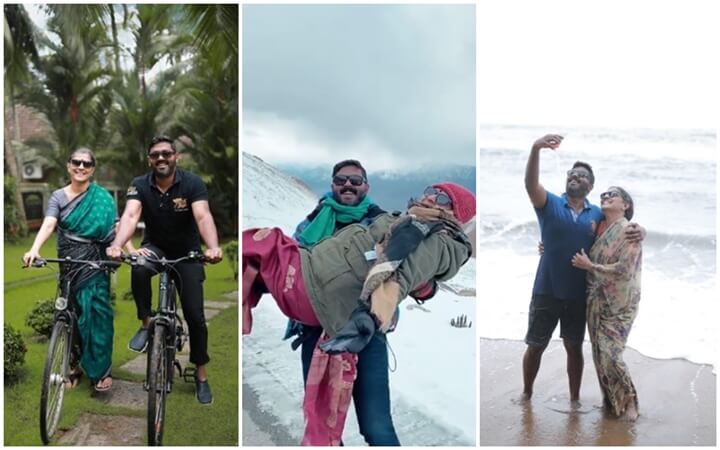 Geetha’s second innings of life is nothing short of a travel memoire. Breaths of fresh air on a balmy beach or at a scenic hill station infuse life into her sexagenarian bones. The ivory beauty of snow-clad mountains, the effervescence of lush green landscape, the kaleidoscopic diversity of folk cultures, the sonority of hymns reverberated on the ghats of River Ganga…put roses on her cheeks. She is greying her hairs while posing for the camera, clicking selfies, riding a bicycle, taking heritage walks, hitting food trails, enriching her knowledge of historical wonders, intensifying her wanderlust….

She feels like a 20-year-old in her 60s. Draped in simple, monotone sarees and adorned with a red bindi on her forehead, she “lives with no excuses and travels with no regrets” – which sends her contemporaries on a guilt trip as they did not realize, “We travel not to escape life but for life not to escape us.” All thanks to her son, Sarath Krishnan.

“Amma is my travel companion for life,” said Sarath, a 34-year-old businessman and avid traveler from Kerala. Smitten by the travel bug at an early age, Sarath started backpacking for road trips across India with school friends. What started as an adventure, bunking school, became his pursuit of happiness. He never saw his mother Geetha step over the threshold of her household duties, and her only break from the daily routine within the house was a sojourn to temples in the neighborhood until one fine day….

How Sarath discovered his mother as his best travel buddy, is an interesting story. Once he dreamed of her strolling with him on a ghat in Varanasi and breathing in the numinous aura of the place on a balmy evening. When the dream broke halfway, he woke up with a start and found himself in his house in Kerala. The dream had a spell on him for a few moments; then he realized it was an epiphany. To make the dream come true, he booked two flight tickets to Varanasi in the morning. He tiptoed into the kitchen and surprised his mother, “Amma, pack your bag now. I have booked a trip to Kashi….”

The surprise trip to Varanasi gave birth to a never-ending wanderlust in her by the time she turned 60. Impromptu traveling is an elixir of her life these days. The mother-son duo goes on a tour discovering the unseen once in every three months. Her second trip was to Mumbai for 11 days, and it ended up exploring the mystique at the Ajanta-Ellora Caves following a sojourn in Nasik and Shirdi. Her travel scrapbook also boasts about moments of hitting sightseeing, culinary and heritage trails from Delhi to Dubai. The patriotic feeling of watching the Beating Retreat Ceremony at the Wagah Border is preserved in her scrapbook.

She did not hesitate to hit the road less travelled as a pillion rider when her son drove a 500cc Bullet from Shimla to Manali via the precarious Rohtang Pass. “On reaching Manali, I could see my mother transformed into an 18-year-old. At the sight of snow, she was jumping, running, laughing, playing…” Sarath reminisces. He is a modern-day Shravan Kumar.

Geetha realized, travel and happiness are synonymous, on her trip to Mount Kailash in Tibet. Watching meditatively the golden halo of Mouth Kailash, the most sacred peak on earth, was a watershed in her travel memoire. The trip is also unforgettable because she would not have been able to make it after her 60 years of age. Being a devotee of Lord Shiva, she says, “Even now, if I close my eyes, I can see the mountain exactly as I had seen back then.” She also accompanied her son during a ride on an eight-seater plane hovering over the summit of Mount Everest, a most adventurous trip that her son says was a lot more exciting than the trips with his friends.

This story of travel inspiration is brought to you by Travel Beats, an Indian Diaspora portal by Indian Eagle. A reputed air-ticketing partner of Indians in America, Indian Eagle is committed to making you travel on best flights to India from USA for the most competitive fares even though air tickets are incredibly overpriced these days.