Home / News / With 3 Emmys for the Show Featuring Their Autistic Son, This Indian American Family is over the Moon 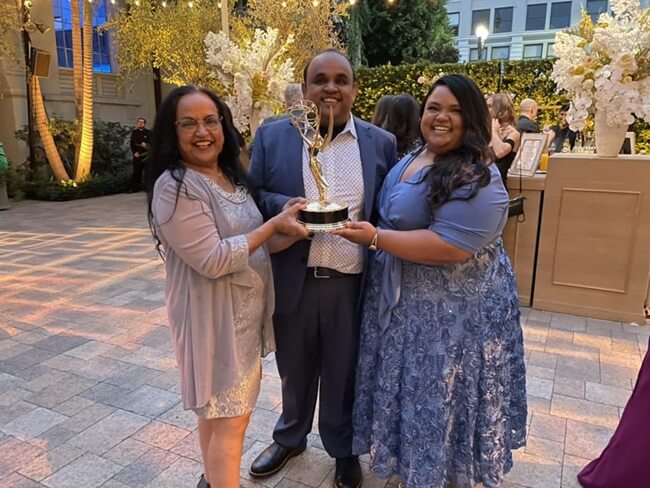 The Emmy wins of the ‘Love on the Spectrum – US’ is out and out a surprise for the Indian American Garg family that found it difficult to get acceptance for their son on the autism spectrum. Be it India or the US, it is not easy to raise an autistic child and find a match for him/her. The docuseries earned the family both acceptance and respect, love and hope from all quarters. Many viewers of the Netflix show resonated with Subodh and his parents. One of them wrote Instagram:

“I just finished watching the show. Subodh, you remind me so much of my brother. I love you and Rachael together in the show.’

Since Subodh was diagnosed with autism, his parents have gone through a lot for 31 long years. The family that calls Long Beach their home in California has always been supportive of Subodh and his condition. His elder sister Aarti has also stood beside him. Their friends and relatives, both in the US and India, who failed to understand the challenges that the Garg family had in raising Subodh, appreciated them on screen. To say in brief, Love on the Spectrum – US and its Emmy win have been the ‘biggest and life-changing’ surprise for Sunil and Anju Garg.

Subodh is a math prodigy. He acquired the skills of being independent and living by himself with the support of his parents and self-help programs. His successful completion of the Independent Living Skill Pathways program at the University of California, Los Angeles has been a steppingstone for him to rise above the obstacles common to individuals on the autism spectrum. He helps his father in the family business and works as a Shipping & Receiving Clerk at UPS at the same time. His father Sunil Garg is the founder and President of Insight Examination Services, Inc.

The Indian American Garg family’s frantic search for a partner for Subodh culminated in the latter’s selection for the Netflix show. Finding a match for Subodh has been a lot more challenging than raising him for his first-generation immigrant parents. They got cold response and limited acceptance in the US where dating is common to teenagers. Though they belonged to the institution of arranged marriages in India where dating has little room, they made sure Subodh learned certain skills for successful dating. But good luck eluded Subodh in his pursuit of finding a partner until he met Rachel in the docuseries, Love on the Spectrum – US.

Subodh Garg is the only Indian American among the autistic individuals who got to be on the show after a series of interviews. His selection was like a blessing in disguise for the family that has been drained socially, emotionally, and financially. Love on the Spectrum – US gave Subodh a platform not only to date a girl, but also to exhibit his mathematical prowess and memory skills. Rachel diagnosed with down syndrome is a motivational speaker. The American reality TV series Born This Way featured her before she was selected for the Netflix docuseries. The Netflix viewers wondered whether Subodh and Rachel were together after the end of the first season. Netflix confirmed that they continue their journey after the show.

“Upon winning the Emmy, I cried. The moment trumped all the sad and happy moments I have faced for the last 31 years since Subodh’s diagnosis. At that moment my whole life flashed by in my mind with thoughts of all the people who have helped us over the years, and yes, also those who did not want to do anything with us,” Subodh’s mother Anju Garg told India West.