Rash Behari Bose is one of the unsung heroes and freedom fighters of India. The story of his role in India’s struggle for freedom is a significant episode in the history of Indian independence movement. Deeply affected by the Partition of Bengal in 1905, Rash Behari Bose quit his job as an officer of the British Raj and became a revolutionary. He was issued a death sentence for his involvement in some conspiracies against Lord Hardinge, the then British Viceroy of India. He fled to Japan where he did the groundwork for the foundation of Netaji Subhash Chandra Bose’s Azad Hind Fauj by writing about the colonized India’s struggle for freedom in the contemporary Japanese publications.

Rash Behari Bose is mostly known as a revolutionary in India, but he is remembered in Japan for another thing, which only the few know. During his stay in Japan, he introduced an authentic Indian curry that is a key dish on the menu at Tokyo’s popular restaurants, even today. 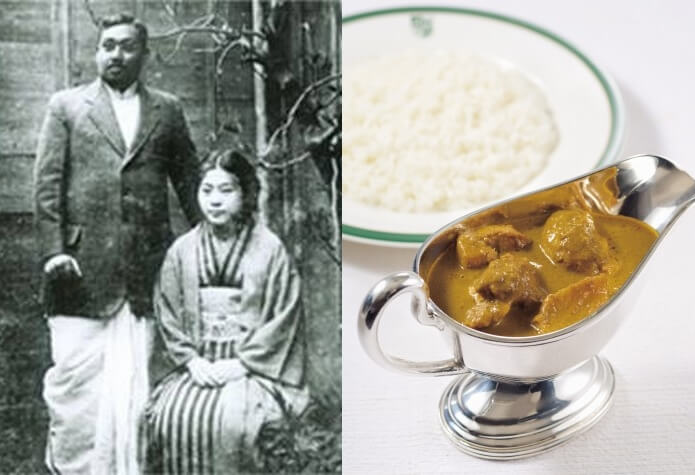 When the detective agencies hired by the British traced his whereabouts in Tokyo, Rash Behari Bose moved to Shinjuku, a commercial district of Tokyo and found a hideout there. The new hideout was the Nakamuraya bakery in one of the narrow, congested, bustling lanes in Shinjuku. The Nakamuraya bakery was owned by Aizo Soma and Kotsuko Soma, who hailed of a wealthy family in Shinjuku. Being supporters of India’s struggle for independence, the Somas sheltered Rash Behari Bose in the basement of the house.

Gradually he got close to other members of the Soma family and developed a bond of affection with them. During his stay there, he shared the recipe of his favorite Indian chicken curry with the Somas. They found it delectable and thumbed it as their favorite too. Thus the Indian dish became popular in the Soma house in Shinjuku.

Eventually Rash Behari Bose married Toshiko, the eldest daughter of Aizo Soma and Kotsuko Soma, in 1918, at a time when the act of tying the nuptial know with foreigners used to be condemned in Japan. Toshiko’s contribution to his pursuit of the mission, India’s freedom from the British, is still not much heard of. The nest of happiness collapsed like a house of cards when she died of tuberculosis, at the age of 28, in 1925 leaving him with two children behind.

After two years of bereavement for the demise of Toshiko, he got back to work and decided to help his in-laws who were struggling to run the bakery in competition with other stores in Shinjuku. He opened a small restaurant on top of the Nakamuraya bakery in Shinjuku and began to serve his favorite chicken curry along with other Indian dishes to the locals. The rich aroma of authentic Indian spices from the restaurant’s kitchen would attract passers-by. Bose himself selected the ingredients and supervised the cooking of the chicken curry which gradually became Indo Karii, a blend of Indian curry and Japanese rice.

The print media of Japan described Nakamuraya’s Indo Karii as Rash Behari Bose’s “Taste of love and revolution,” which gave tremendous publicity to the restaurant and made it a must visit for the best Indian food in Tokyo. It evolved into such a big business that it went public on the Japanese stock exchange.

In 1944, Bose was hospitalized due to a collapse of the lungs. When the visiting doctor asked him about his appetite, Bose replied gloomily, “How can I have an appetite when the nurses don’t allow me to have the food I most desire?” The doctor asked what the food was. Obviously, it was Nakamuraya’s Indo Karii.

Even so many decades after Rash Behari Bose breathed his last in 1945, Nakamuraya’s Indo Karii continues to be a household name and a popular dish in Japan. The restaurant, Nakamuraya Manna in Shinjuku, was renovated in 2015, and is spacious enough to host more than 100 people at a time. Vintage photographs of the Somas and Bose in the lobby add to the historical significance of the restaurant.

Rash Behari Bose’s ‘taste of love and revolution,’ Nakamuraya Indo Karii, is a pure nostalgia for Indians, especially Bengalis, on visit to Tokyo.