Summer is the season of road trips in the Himalayan region of North India. Among the destinations for road trippers, Ladakh is the first to ring the bell when summer begins to feel hot. Inhabited by the people of the Indo-Aryan and Tibetan descent, Ladakh spans from the Karakoram Mountain range in the north to the Great Himalayas in the south. Full of natural wonders, Ladakh is home to scenic lakes, hilltop Buddhist monasteries, and the world’s highest motorable pass. The road to Ladakh has been a pull to many road trippers like Jatin Kapoor, Managing Director of Alternate Atlas Travels. Jatin shares his story of Ladakh road trip with Indian Eagle. 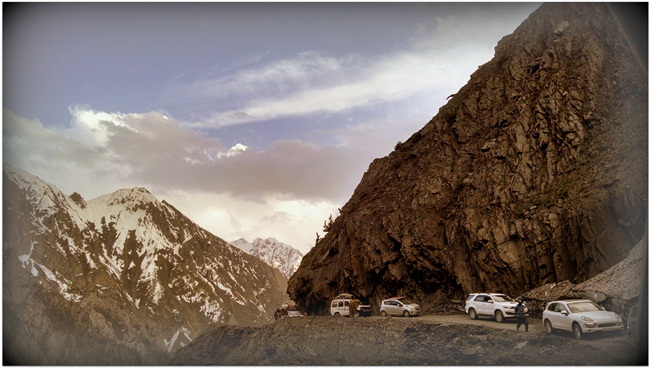 In June 2014, our road trip to Ladakh took us through some of the less travelled and toughest roads on earth. I had no idea that the most magical lakes exist in this part of the Himalayan region. The trip was full of uphill driving, adventure, excitement, fun and thrill! [pullquote]To say precisely, the Ladakh road trip is a lifetime experience which will not fade until we drink to ultimate adventure.[/pullquote]

Usually, adventure begins its course from the moment the idea of a road trip to such high-altitude destinations like Ladakh comes to the mind. The idea of driving to Leh, the capital of Ladakh in the Indian state of Jammu & Kashmir, at an altitude of 11,562 feet, is an adventure itself. In fact, we were so driven by unquenchable thirst for thrill that we drove to Zanskar Valley beyond Leh. One fine day, we, a group of twelve friends, hit the road with a Porche, a Merc and a Pajero.

Babur, the founder of the Mughal Empire in India, stated, “In India everything is done differently from the rest of the world. Nothing will ever change this,” according to historians. The culture & tradition of the forbidden kingdom of Tibet is on the verge to extinction due to the modernization spree of the Chinese Government, but you can still find the same thriving in the Buddhist Gompas of Zanskar. – Alternate Atlas

We started from Delhi and drove to Srinagar via Chandigarh and Pathankot. We took the Mughal Road, which was used for trading in the Mughal Empire. Driving past the chicken’s neck of the Mughal Road, we reached Pir Ki Gali in the Pil Pamjal Mountain range in Kashmir Valley.

The 84–km long Mughal Road passes over the Pir Panjal Mountain range, at height of 11,500 feet. It is higher than Banihal Pass. The Mughal Road to Kashmir Valley is a relief from the over-crowded Jammu-Srinagar Highway. The road has historical association with the Mughal era of India. The Mughal emperors used to travel to Kashmir via this road in the 16th century. Akbar trod the road to conquer Kashmir region in 1586. Akbar’s son Janangir breathed his last on the way back from Kashmir via this road. – Indian Eagle 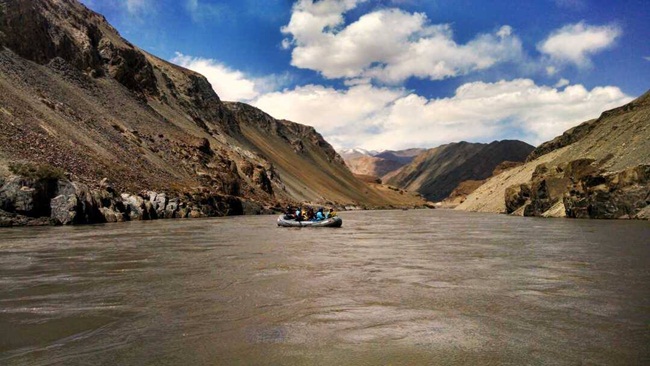 We felt an influx of adrenalin in our veins while navigating through the electrifying waters of the Zanskar River on the way to Zanskar. Another spot of awe-inspiring adventure was Hunder, an oasis in the desert of Nubra Valley in Jammu & Kashmir. Nubra Valley is a cold desert dotted with sand dunes. Driving through Hunder after sunset is a risk to get stuck in the giant sand dunes. I would like to suggest using a face mask to prevent sand grains getting into the eyes and mouth during a drive through Hunder in Nubra Valley.

Nubra Valley whose natural beauty stuns the senses is 7 km away from Diskit Town, which is known for Diskit Gompa, one of the famous Ladakh monasteries. A 160-km long scenic drive from Leh, Hunder Village is close to the Siachen glaciers and the Pakistan border. The area is beyond Hunder Village is prohibited. Khardung La, the highest motorable road in the world, falls on the way to Hunder. – Indian Eagle 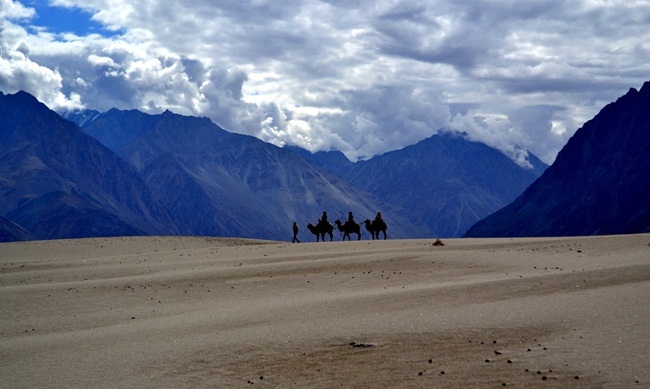 We were fortunate enough to see double-humped Bactrian camels lying back on sprawling white sand dunes at Hunder. As far as I know, Bactrian camels are not of Indian origin. This particular species of camel came to India when a group of caravans used to tread this route for trading between India and the Central Asian region of Bukhara, Kokand, Turkestan, and Xinjiang region of China. [pullquote]The double-humped camels are the most beautiful beings in the Nubra Valley.[/pullquote]

Then, we rode bikes on the National Highway 1. We indulged in some fun over free-style stunts while riding bikes to the Magnetic Hill, which is also known as Gravity Hill. Then we visited the most famous Pangong Lake that changes its color several times a day. It is an unusual natural phenomenon that I have ever seen. We did photography and posed for the camera at Pangong just as every tourist does. 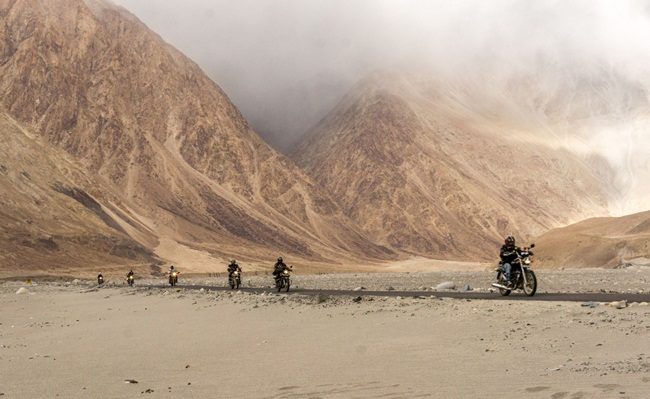 Then we drove to Shyok Valley, close to Nubra Valley. Khardung La is the gateway to both of the valleys in Ladakh. The beauty of Shyok Valley is the Shyok River where we enjoyed ourselves over fishing. The Shyok River, a tributary of the Indus River, flows through Ladakh in India and crosses to Pakistan. The river has maximum width at its point of confluence with the Nubra River.

We came back to Delhi via the Leh-Manali route. When we returned, we felt heavy with a collection of digital photographs and a treasure of moments fresh on our minds. Adventuresome but successful driving for 4,000 kilometers certified us as road-trippers. We boast of this experience as a matter of pride, which we are sure, inspires others to hit the road to Ladakh.

My tips for upcoming road trippers 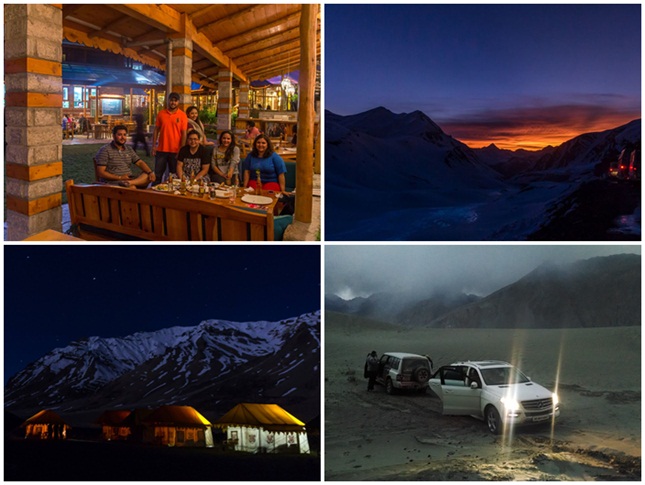 The native people of Ladakh are as innocent as the place itself. The smile on their faces reflects their inner beauty which harmonizes with the beauty of this Himalayan region. It is one of the experiences to cherish for years! Camping under the starry sky, picturesque landscape, warm hospitality, soulful nature and peaceful vibe of the place are some of the reasons to visit Ladakh.

This story is brought by Indian Eagle with inputs & photographs from Jatin Kapoor. Indian Eagle is a leading international travel agency booking the best USA to India flights at the lowest airfare.

Jatin Kapoor is one of the young & dynamic travel professionals at Alternate Atlas. He is on a mission to help travelers explore the natural and cultural uniqueness of India. At Alternate Atlas, his team organizes village walks, road trips, birding trips, jungle safaris, home stays, and trips to offbeat destinations across India.