Paheli, one of the offbeat films in Indian Cinema, celebrated its 10th anniversary this June 24. Directed by Amol Palekar, and starring Shah Rukh Khan and Rani Mukherjee in the lead, Paheli is a cinematic epic adapted from a short story by author Vijayadhan Detha. The movie is a visually appealing portrait of Rajasthan and its desert, folk culture, ethnic fashion as well as traditions. Each frame of the movie brought the colors of Rajasthan alive on the silver screen through the emotive story of a newly married bride under the veil and her defiance to the restrictive norms in the patriarchal society. Indian Eagle takes a look into what makes Paheli an inspiration for travel to Rajasthan and what makes it a favorite of Indian Americans even after 10 years. 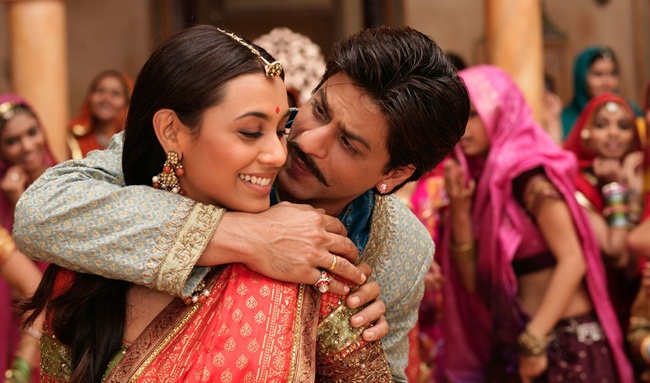 In the history of Indian Cinema, Paheli is one of the few Hindi movies shot across the vast expanse of sands in Rajasthan. It provides a mirror to the beauty of rural India in general and holds a prism to reflect the hues of Rajasthan in particular. Paheli is a visual illustration of “Beauty is only skin deep,” one of the Shakespearean maxims, which is much true about Rajasthan. Both the throat-chocking aridity and the colorful beauty of this Indian state are so intricately blended in the cinematic frames that the gleaming beauty of golden sands in bright sunshine is apparently invisible to pairs of ordinary eyes. 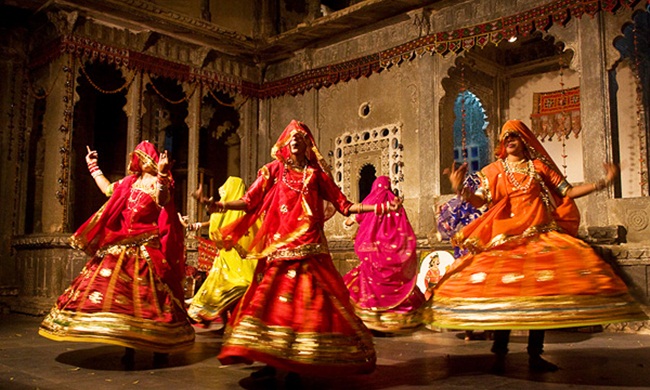 Paheli is an ode to the folk culture – music and dance – of Rajasthan. The song “Laaga Re Jal Laaga” featuring traditionally clad Rani Mukherjee and other rural belles perform Ghoomar, a most popular folk dance, on the stairs of a baori (stepwell) is one of the iconic sequences in Indian Cinema. Ghoomar is equally popular with the women of aristocratic families and the Kalbeliya women of the Gypsy tribe in Rajasthan. The premier of Paheli at some of the renowned international film festivals brought this Indian folk dance to limelight the world over.

Watching the Ghoomar dance by a bevy of beautiful women, draped in ghagra of different colors, at the 18th century heritage mansion Bagore Ki Haveli is one of the things to do in Udaipur. – Indian Eagle 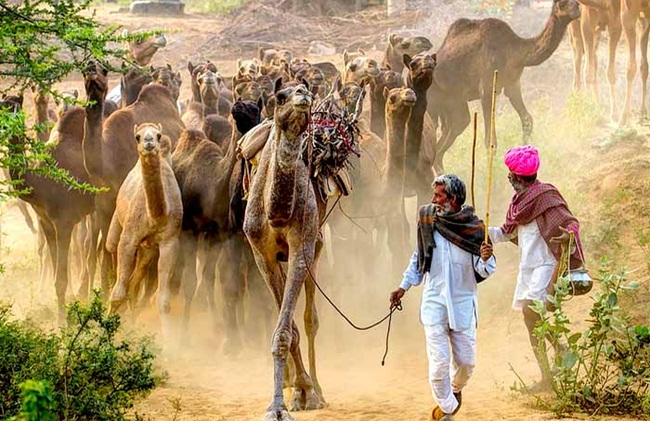 Camel race is part of the cultural extravaganza during the Pushkar Fair in Rajasthan. Held in Thar Desert during winter (November), the Pushkar Fair is India’s biggest cattle fair. It is famous for spectacular camel race and other entertaining activities including folk dance, folk music, snake dance, hot air ballooning, mustache contest and breaking of pitchers. – Indian Eagle

Paheli was the first Indian film to showcase the ethnic fashion of Rajasthan in true colors on the big screen. It was followed by the period drama Jodhaa Akbar showing the traditional Rajput fashion, in 2008. As the story of Paheli revolves around a rich merchant’s family in the upper strata of society, the characters of the leading cast are seen in the best of traditional attires, more refined and distinguished, which is a far cry from what the rural people of Rajasthan wear in day-to-day life.

Rani Mukherjee’s character Lachchi is a newly married damsel with an embroidered veil over the head and wearing heavily embellished ghagra. Adding to the ethnic style quotient of the movie is the colorful turban that Shah Rukh Khan’s mustached character keeps wearing as the native male folks do. Even superstar Amitabh Bachchan flaunts a crimson red turban during his cameo in Paheli.

Rajasthan is a beautiful land of brave Rajputs, heritage palaces, historic forts, haunting stories, and offbeat fairs & festivals like Gogamedi Fair, Gangaur Festival, Camel Fair, Elephant Festival, etc. The list of things to do and things to see in Rajasthan is simply endless! October to April is the best time to visit this colorfully beautiful Indian state of desert. Travel to India and explore the kaleidoscopic culture of Rajasthan! – Indian Eagle

One thought on “Paheli Movie: An Ode to Beauty & Culture of Rajasthan”