Durga Puja! It’s one of the few Indian festivals that overseas Indians’ nostalgia runs high for. Durga Puja is celebrated wherever Bengalis are. With the Indian Bengali community spiraling across the world, this festival has become a global celebration. Obviously, Durga Puja is not an uncommon festivity in USA where there is a good number of Bengalis. Durga Puja in USA may not match the grandeur of the celebration in India, but Bengalis in the United States celebrate it with lots of enthusiasm. If you are new in the US and wondering where to celebrate Durga Puja 2017 in USA, we at Indian Eagle recommend the following best places for Durga Puja celebrations in USA: 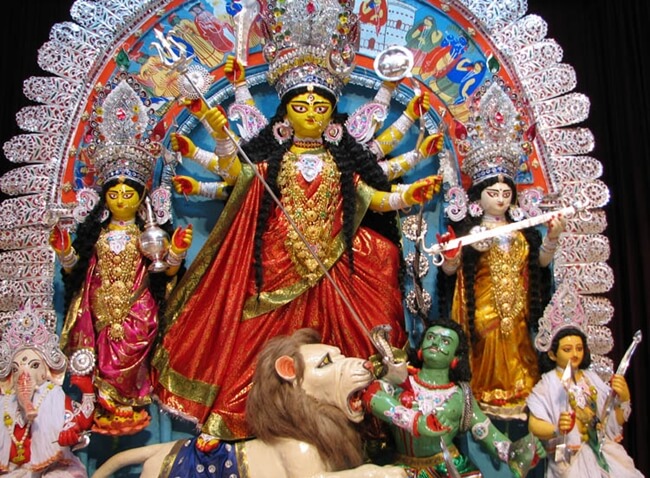 The Bengali Association of Greater Atlanta (BAGA) is known for its traditional Durga puja celebration in Georgia, USA. One of the best Atlanta Indian events in September 2017, this Durga Puja in USA is a window to the Bengali culture, heritage and traditions. The Bengali Association of Greater Atlanta’s Durga puja 2017 celebration packs in lots of excitement for Atlanta Indians as Anupam Roy from Kolkata will strike the cords of hearts with his melodies. Surojit, another great artist from Kolkata and his band will perform on the second day of the Greater Atlanta Durga Puja 2017 in USA.

Also Read: All You Need to Know about Bengali Food

Among the upcoming celebrations of Durga Puja 2017 in USA is the one in Lilburn by Pujari, a nonprofit, nonpolitical, and socio-cultural organization of Atlanta Indian Bengalis. Founded by a group of Bengalis in and around Atlanta, GA, Pujari has been celebrating Durga puja in Lilburn for over a decade. The Pujari Durgotsav 2017 is the biggest not only in Atlanta but in Georgia. The cultural programs on the schedule of Pujari Durgotsav 2017 include a live music show by National Award-winning Imon Chakrabarty from Kolkata. The venue of this Atlanta Durga Puja 2017 is below:

Durga Puja in Littleton, MA is recognized as one of the best Indian events in the Greater Boston Area. Bangla-O-Biswa, a premier nonprofit organization of Bengalis in and around New England, is at the helm of this Durga puja 2017 in USA. The Littleton-based Bangla-O-Biswa is known for celebrating the cultural heritage of Bengal in New England. The cultural programs on the schedule of New England Durga Puja 2017 include a live concert by Surojit Chatterjee’s band from Kolkata. A grand mela with stalls selling Bengali food and handcrafted items is the main attraction of the Durga Puja 2017 in Littleton, MA.

Sanskriti Inc. is all set to celebrate Durga Puja 2017 in Maryland. A nonprofit, socio-cultural and educational organization of Bengalis in the Washington Metro Area, Sanskriti is leaving no stone unturned to make Durga Puja a grand celebration this year. The Maryland Durga Puja 2017 comes with a great schedule of cultural events including a musical evening by Jimut & Chandrika (Sa Re Ga Ma Champion and Finalist of 2017). The second day of the puja will be steeped in mellifluous songs from the golden era of Bengali Cinema.

Uttoron, a nonprofit organization of Bengalis in the Greater Seattle area of Northwest USA, celebrates Durga Puja with lots of enthusiasm thousands of miles away from Bengal. Popular in North Bend, WA, the Uttoron Durga Puja is one of the best desi cultural events in Greater Seattle. Bellevue College is the venue for this Durga Puja 2017 in USA. Uttoran keeps a great schedule of cultural activities other than Durga Puja. Check the following details of Seattle Durga Puja 2017.

The Anjali Hindu Society of Central Florida celebrates Durga Puja in Orlando every year, and organizes a number of community programs throughout the year. The Orlando Durga Puja 2017 is expected to be grander than the previous years. Popular with Bengali Indians in Greater Orlando, this event is open to all Indian communities there. You can contribute to the Anjali Hindu Society of Central Florida by donating to or volunteering the cultural programs of the Orlando Durga Puja in Leesburg.

Also Read: Why Bengalis are Crazy about Durga Puja

Soikot, the Bengali Society of Greater Tampa Bay, organizes one of the best Durga Puja celebrations in Florida. A nonprofit group under Florida Statutes 617, Soikot celebrates major Bengali cultural festivals including Durga Puja, Saraswati Puja, Netaji Jayanti, Rabindra Jayanti and other occasions. The main attractions of Tampa Bay Durga Puja 2017 are two musical evenings: one by Anupam Roy and the other by Shakha Lahiri from Kolkata, India. Check the venue and schedule of this Durga Puja 2017 in USA:

The Bengali Association of South Florida (BASFL) is credited with organizing a grand Durga Puja celebration in the Miami metropolitan area. Founded in 2007 as a nonprofit, socio-cultural organization, the Bengali Association of South Florida celebrates Durga Puja as part of their continued effort to keep up with the cultural heritage and traditions of Bengal. The two-day schedule of this Durga Puja 2017 in USA is full of musical programs, including an eclectic mix of old and new Hindi and Bangla songs. Below are the venue and schedule of this South Florida Durga Puja 2017:

The Cincinnati Durga Utsav is a grand cultural bash for and by Bengalis in Cincinnati, Ohio. In its tenth year, the Cincinnati Durga Utsav will be celebrated over great cultural programs including two live concerts by Rupankar and Sona Mahapatra, two popular singers from India, and a Bengali play ‘Pater Bibi’. Driven by the motto, “Together We Can,” Cincinnati Bengalis come up with new ideas and thoughts for the annual Durga puja celebration.

Write to novabacommittee@yahoo.com for venue and schedule of Northern Virginia Durga Puja.

Greater Richmond Bengali Association is one of the thriving Bengali organizations in USA. They organize four major events every year: Saraswati Puja, Poila Boisakh, Annual Picnic and Durga Puja to connect their children born and brought up in USA with the culture and heritage of Bengal. They had imported Durga idol from Bengal for the puja in 2001. With the community strength growing over years, the Richmond Durga Puja has become a most awaited celebration for Bengalis in and around Virginia.

Prantik, a Bengali association in the Greater Baltimore Metropolitan Area, is known for its Durga puja celebration in Maryland. One of the oldest Bengali organizations in USA, Prantikhas been a host to many eminent artists from Kolkata, including SuchitraMitra, Hemanta Mukhopadhyay, Dwijen Mukhopadhyay, Chinmoy Chatterjee, Kanika Bannerjee, Aparna Sen, Ajay Chakrabarty, Utpalendu Choudhury, Sabita Choudhury to name a few. You can imagine how grand Prantik’s Durga Puja 2017 in USA is.