Today is World Idli Day. But we at Indian Eagle are rejoicing in the victory of Biryani in Food Network’s Beat Bobby Flay, a popular American cooking competition and reality show hosted by celebrity chef and restaurateur Bobby Flay. The credit goes to Indian American chef Aarthi Sampath who won the “Beat Bobby Flay” competition on American TV for her Chicken Biryani dish. 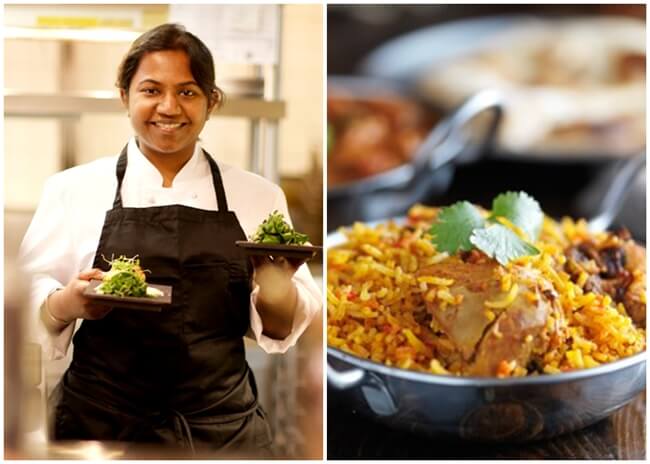 In each half-an-hour episode of the Season 15 of Beat Bobby Flay, the host picks an ingredient to be used by two competing chefs in cooking a dish. Chef Aarthi Sampath and her competitor, Zoe Schor were given Fava Beans to use along with other ingredients in a dish in the last episode titled “Ladies Don’t Play.” She used Fava Beans in her unique recipe of Chicken Biryani and emerged as the winner of Beat Bobby Flay in Season 15.

New York-based Chef Aarthi Sampath, whose journey from the kitchens of Mumbai to the culinary world of USA is full of gastronomic innovations, assisted Chef Vikas Khanna on The Billionaire’s Club Dinner that Indian Prime Minister Narendra Modi hosted at Waldorf Astoria in New York City. She mastered the art of Indian cooking at Taj hotels in Mumbai, Delhi, Hyderabad and Chennai for the initial five years of her career before she left for the United States at attend Johnson & Wales University.

It is she who has been spearheading the growth and popularity of Junoon, Chef Vikas Khanna’s flagship restaurant which featured on our list of 10 Best Indian Restaurants in New York City, while going up the ranks from an intern to the head chef (Chef De Cuisine). Indian American Aarthi Sampath’s portfolio of culinary experiences also includes her association with chefs at the James Beard Foundation.