Durga Puja, the grandest festival of Bengal in India, is a traditional ceremony dedicated to the worship of Devi Durga, the goddess of power (Shakti), in form of Divine Mother. Though Bengal has been the epicenter of this festivity since the 15th century, it has become a global celebration with the migration of Bengalis to other countries. How glittering and glorious Durga Puja is, will be convincing to you, if you ever travel to Kolkata in the month of October. To be precise, it is the ultimate cultural extravaganza and festive gala in Bengal, the history of which is associated with the Muslim rule and the British Raj in India. 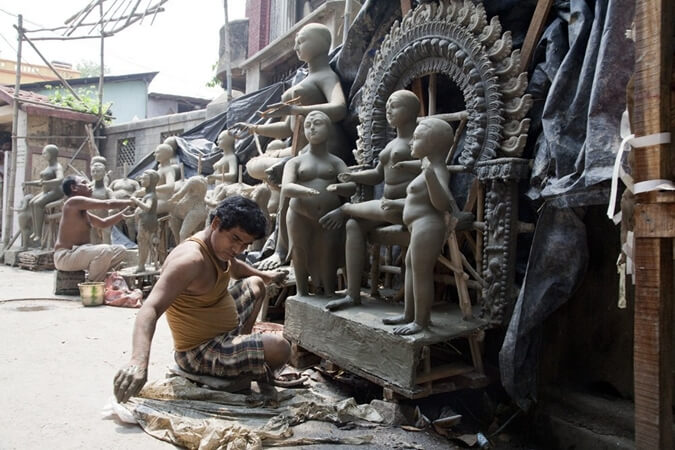 Durga Puja celebration was an emblem of prosperity and power in the aristocratic class of Bengalis, to say landlords as shown in the National Award winning movies of Rituparno Ghosh, such as Utsav, Hirer Angti and Antarmahal. It is heard that some influential landlords invited the British officials to attend the celebration so that they could be in good books of the British East Indian Company. With the passing of time, Durga Puja became a mass celebration outside the embellished interiors of palatial houses in Bengal.

However, there are different legends about the origin of Durga Puja. According to the folklores of Bengal, the landlords of Malda and Dinajpur were the first to have initiated the celebration in the 15th century. The Ramayana, one of the two great Indian epics, says that Lord Rama had first worshipped Devi Durga to be blessed with victory over Ravana. Let’s keep aside the controversies, myths, legends and folklores to focus on the men at work behind the canvas – the clay idol makers or potters at Kumortuli in Kolkata, on the bank of Hugli River.

You might have caught gripping glimpses of Durga Puja celebration in some Bollywood movies, to say Pradip Sarkar’s Parineeta and Sanjay Leela Bhansali’s Devdas. But, Kumortuli where thousands of Durga idols are made for domestic celebrations and Bengali communities on foreign shores has remained out of the focus of directors’ camera lens. The 5-day long celebration follows preparations for 3 to 4 months. The making of Durga idols at Kumortuli is the major part of the preparation. Kumortuli, the hub of clay idol makers and potters by the riverside is one of the best tourist attractions in Kolkata City.

Also Check: How to Save Big on Flights to Kolkata

Kumortuli is older than the city itself. The foundation of the city dates back to the year 1690, whereas Kumortuli has been in existence long before that. The ancestors of today’s potters were said to have migrated from their native land Krishnanagar to Gobindapore, one of the three villages the then Calcutta was formed of, in quest of sustenance. They settled by the river of Ganga or Hooghly River and began to make clay pots, utensils and idols. Since then, they have been supplying idols to puja committees at home and abroad.

The idol making process is, at times, disturbed by adverse atmospheric conditions. The artisans at work brave all odds to get the idols ready by Mahalaya, the day of invoking Goddess Durga. However, it is a pleasure to watch the artisans make life-like idols out of clay. These days, the making of theme-based artistic idols with an aesthetic aura is a popular trend due to stiff competition among the puja committees. The concrete image of Devi Durga sitting on a lion and slaying the buffalo demon at her feet evokes awe, wonder and devotion.

The artisans of Kumortuli remain in the dark on the flipside of grand, spectacular Durga Puja festival though their innovative creations are cruised to overseas Bengali communities in the USA, Europe, Africa, Australia and other countries. Being an overseas Indian, you celebrate Durga Puja away from home every year, but the feel, the flavor and the fervor of the festivity are to be experienced only in Kolkata, in Bengal, in India.