The saying “Hope for the best and prepare for the worst” does aptly describe the current time for H4 Visa holders in the United States. As the Trump administration’s regulation to revoke the H4 EAD policy for spouses of some H1B professionals is currently under review at the White House Office of Management and Budget, a shroud of anxiety and uncertainty has enveloped the minds of nearly 100,000 foreign nationals on H4 Visa, mostly Indians.

The only ray of hope penetrating the atmosphere replete with concerns among H4 and H1B visa holders is a petition titled “H4 EAD – Please do not revoke the H4 EAD policy” on the White House website. Initiated by IT Pro Alliance, a nonprofit trade association of IT professionals in the USA, the petition is aimed at requesting the Trump government not to terminate work permit for the H4 EAD policy beneficiaries.

IT Pro Alliance based in New Jersey and having chapters across the country, opines that the petition on the White House website to save the H4 EAD Policy will make the Trump administration think of possible socio-economic ramifications of removing over 90,000 H4 visa holders from the American workforce. 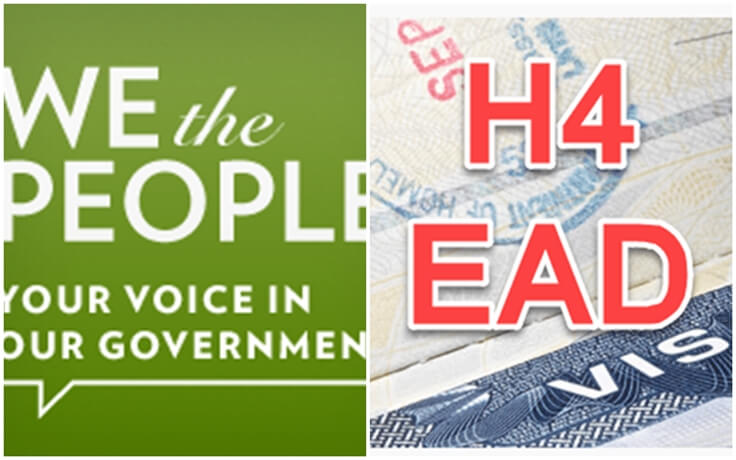 “Any rule change repealing the employment authorization for H4 visa holders would result in substantial costs to the US economy as well as Federal and State tax coffers. What’s more, those losses would not be offset at all by any increase in employment and income by domestic workers,” said Ike Brannon, the president of Capital Policy Analytics, a consulting firm in Washington DC, in a Forbes article dated March 5, 2019.

The data analysis of the nationwide survey that Capital Policy Analytics conducted among H4 Visa holders validates the fact that H4 workers are highly qualified and skilled. The survey data also demonstrates that there are not many American workers with the same or similar education and expertise to fill the positions if left vacant by the H4 workers. Ike Brannon went on to say uninhibitedly in his article, “Providing H4 visa holders with the ability to obtain gainful employment, has provided an economic and fiscal boost to the US economy.”

The First Amendment of the US Constitution has granted the right to petitioning the government to everyone in the US. The White House website includes a section “We the People – Your Voice in the White House”, which anyone can use to start a petition on any issue of mass importance. Then the petition can be shared online and offline to collect signatures. If the petition manages to collect, at least, 100,000 signatures in 30 days from the time it is created on the White House website, it will compel the government to review the petition, focus on the issue and give an official response, according to The American Bazaar Online.

Launched on February 22, 2019, the petition on the White House website to save the H4 EAD policy has received 42,500 signatures to date. Some are hold back from signing the petition by the dint of their unreasonable inhibitions about making their names and email IDs public. 24 March is the deadline of the petition. People will be able to sign the petition even after March 24 while the petition is in a queue to be reviewed by the White House. Leading US visa and immigration experts opine, “the more signatures (over the mandatory 100,000), the stronger the petition.”

Another way for H4 workers to save their work authorization from the H4 EAD-revoking legislation is to petition to their Congressmen and mount the pressure on them to take the H4 Employment Protection Act further. “Any Congressional action can propel the movement towards a solution, as all the Indian American Congressmen have been supporting the eligible H4 Visa holders’ right to work,” Amy Bhatt, the author of High Tech Housewives, told The American Bazaar Online.

There are nine steps for a legislation to become a law in the United States. The H4 EAD-revoking legislation is at stage four, at present.