Last week, the Indian Green Card Backlog community hit Twitter giving vent to their mounting outrage at Illinois Senator Dick Durbin who blocked the passage of S.386 or Fairness for High Skilled Immigrants Act 2019 to the Senate and dashed all hopes for elimination of the country-wise Green Card cap for Indians. The hashtags – #DurbinWidow and #DurbinOrphan – have been trending on Twitter since Thursday, October 31.

No way out of the Green Card backlog, which is taking toll on the dreams of Indian families in the US, is adding to the community’s outrage. The latest heartbreaking story of Indian families falling apart over the Green Card limbo is that of Shiva Chalapathi Raju, who died all of a sudden last week. His sudden demise has rendered his pregnant wife, Bobby Sowjanya, out of the H4 dependent status. 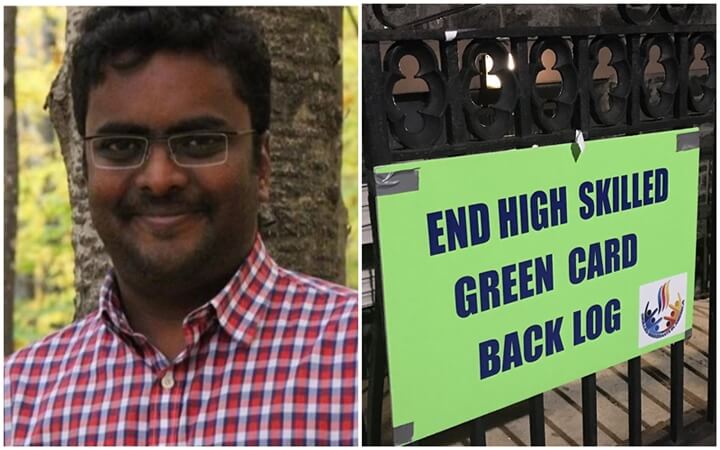 Having lost her H4 status, Bobby Sowjanya is neither eligible for a Green Card nor allowed to continue staying in USA. She is left with no choice but to return to India. She is going through turbulent times and a phase of uncertainty as Suhas Khamgaonkar of New Jersey, who had to travel back to India leaving her daughter all alone in USA just before this Diwali after her husband passed away.

Shiva Chalapathi Raju, a techie from Andhra Pradesh, was one of the Indians on the Green Card waitlist. He had been working with Oracle in High Point, North Carolina. Before he switched to Oracle, he worked for Wipro and British Petroleum in Michigan and Illinois respectively.

What happened to Shiva Chalapathi Raju and his wife is just a small part of the bigger picture of the plight of Indian families stuck in the Green Card logjam and their children aging out of the H4 status.

Notably, Senator Dick Durbin introduced a new bill, RELIEF Act – the Resolving Extended Limbo for Immigrant Employees and Families Act (S.2603) – this October seeking an increase in the number of Green Cards issued every year through a proposed amendment of the Immigration and Nationality Act.