Hyderabad, the capital of Telangana, is to get a new US Consulate complex by 2020. Announced in June 2016 by the US State Department, the project will cost $203 million and is supposed to be finished in 2020. The second USA Consulate complex in Hyderabad will spread over 12 acres in a high-tech area. It will have an accommodation facility for Marine security guards, service support buildings and other facilities for the consulate staff.

The existing US Consulate in Hyderabad currently processes 300 to 400 visa applications on a daily basis, which is increasing day by day. In India, Hyderabad sends the highest number of students to USA every year. Based on the data from 2008 to 2012, Brookings Institution, a Washington DC based think tank, reported that the largest number of F1 visas from India was issued to Hyderabad (26220). The figure was 30,000 when combined with the number of F1 visas issued to the applicants from Secunderabad for the 2008-2012 period. The F1 visas issued to the undivided Andhra Pradesh, including Vijayawada and Visakhapatnam, were more than 30,000 for the given period. 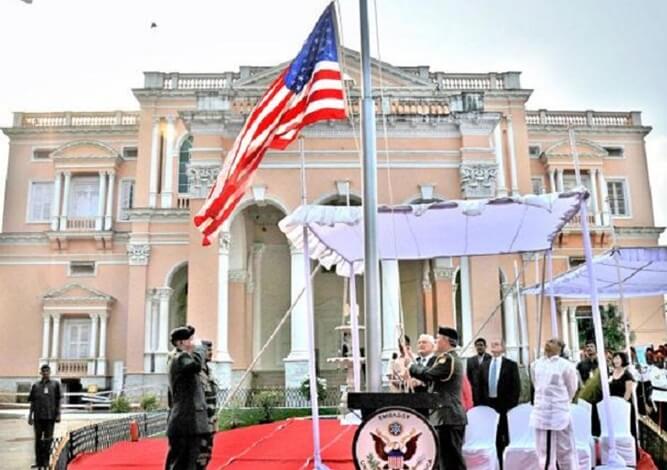 Evidently, the upcoming second USA consulate complex in Hyderabad will add to the current facility in the city. Several cases of deportation of students having F1 visa from USA to India have been reported in the past 12 months. 45-50 students from Telangana and Andhra Pradesh were sent back from California in the last week of December 2015. The number of Telugu students deported from the US went up to 130 in the first week of January 2016. Once the new facility is in place, such cases of deportation will better be investigated.

Montgomery-based Caddell Construction in Alabama, US, has got the contract for building the multi-storied USA Consulate complex in one of the busiest outposts of Hyderabad. Richard Bauer, a Phoenix-based architect in USA, has designed the complex. This architecture company is recognized and awarded by the American Institute of Architects.

The upcoming second USA Consulate complex in Hyderabad is also being considered a new step towards improvement of the US-India bilateral ties in culture, politics and economy. The process of delivering a number of services to American citizens in India and Telugu Indians in USA will be more streamlined. The Telugu Diaspora or the community of Telugu-speaking Indians is on the boom in the United States.

Travel Beats is an Indian community portal by IndianEagle, a leading travel partner of Indians in USA. IndianEagle books the best flights to Hyderabad in all travel classes for Telugu Diaspora in the US.