Indian American kids leave no stone unturned to prove their mettle in any discipline of knowledge. Children of Indian origin in the United States have won the National Geographic Bee championship for seven consecutive years. They stay abreast of current events of national and international importance, thereby intensifying their knowledge of geography.

The latest testimony to their excellence in pursuit of world knowledge is two Indian American students’ winning of national championships at the recently concluded International Geography Bee 2019. 11-year-old Samvrit Rao and 18-year-old Karan Menon won the trophies in their respective divisions – Varsity and Junior Varsity. We at Travel Beats, a leading community portal by Indian Eagle Travel, rejoice in the achievement of these two whiz kids as part of our continued series of inspiring stories about young Indians in the US. 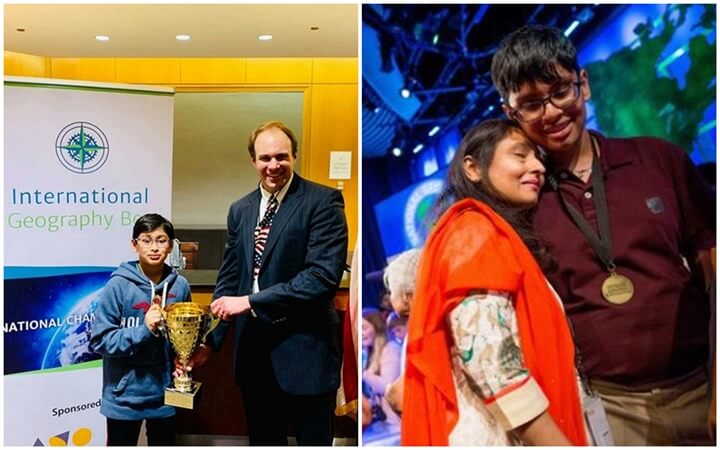 Samvrit Rao (left) and Karan Menon with his mother (right)

A sixth grader at Stone Hill Middle School in Ashburn, VA, Samvrit Rao became the youngest champion in the junior varsity category, in the history of the International Geography Bee 2019. In addition to being awarded the coveted trophy, he has been selected for competing in the International Geography Bee World Championship 2020 and given a scholarship to pursue his passion for geography knowledge.

“Speed was the key to clinch the title, of course, with an in-depth knowledge of geography,” said sixth grader Samvrit Rao ecstatically while talking about how he practiced for the national championship answering pyramidal-style questions (an order from obscurity to familiarity). He owes the International Geography Bee 2019 championship to his parents who competed with him online to help him prepare for the tough event.

Samvrit’s winning streak dates back to 2015 when he was a second grader and made it to the Top Ten of the US Geography Olympiad finals against fifth and sixth graders, in Louisville. Being a music enthusiast, he is taking lessons on Carnatic music of India.

Alongside participating in international knowledge competitions, Karan Menon helms GeoED Foundation, a nonprofit on the mission of promoting geographic literacy among children in India, the US, and other countries. Besides co-founding GeoED Foundation, he created GeoBee City, an online community for students to help each other prepare for the National Geographic Bee.