Home / Features / This Indian Boy from Mumbai Slum is Research Scientist in USA; Thanks to His Single Mother for Her Grit

At times, such an unpleasant advice as that her son had better take up a driver’s job poured in from whomever Jaykumar Vaida’s mother approached to help her pay his school fees. But, she neither gave up nor let his son’s desire to rise over the poor circumstances die. It is because of her struggle and grits that Jaykumar made it to the bigger world far from the slum in Mumbai. Today, he is a research scientist and studying nanotechnology at the University of Virginia. 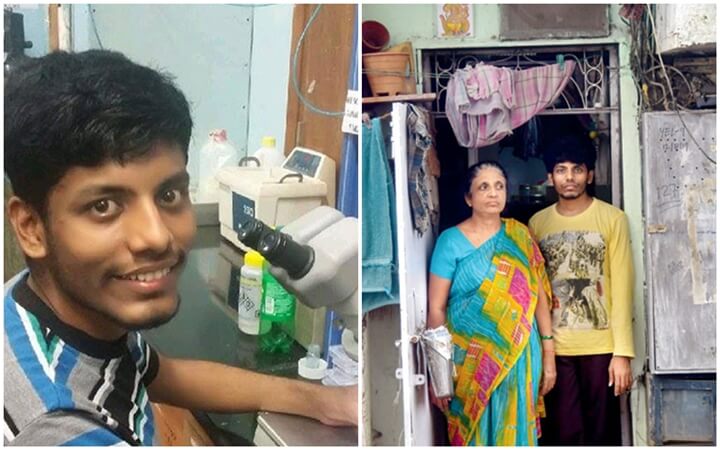 After her husband divorced and her in-laws disowned her, Nalini (Jaykumar’s mom) became a single parent of her only child and took shelter in her mother’s 8×10-sq-ft room in Mumbai’s Kurla slum, which they called home. She took a clerical job to provide for Jaykumar’s upbringing and education.

The circumstances deteriorated further for Nalini’s sole world of parenthood when her own mother was on deathbed in 2013. She had to give up the job in order to nurse her ill mother. She was left with no other option than taking odd jobs to make her ends meet. Jaykumar recalls the grim days of living on only bread and chai after poverty pushed their household from pillar to post.

As they say, “After every sunset there is always a sunrise,” a local temple trust stretched its helping hand to pull the mother and son duo out of the misery. Nalini and Jaykumar were given groceries and secondhand clothes to hold on to the basics of living. The 8×10-sq-ft room, which they called home, saw Jaykumar’s struggle, hardship and grits from school to college.

Unlike his classmates from privileged families, he never had the luxury of eating out with friends or going for school picnics. In spite of residing in the same neighborhood, some of their relatives never came to help him. What helped him tide over hard times is his belief that his mother’s struggle and his hardship would definitely pay off one day.

Discovery channel shows, space movies and sci-fi films that Jaykumar watched in the neighborhood piqued his interest in science. He always sought answers and explanations to his satisfy his curiosity about the solar system, the galaxy and celestial wonders. Misinterpretations of the cosmos and inadequate knowledge of space around him increased his appetite to learn more about the universe and intensified his passion for science.

God helps those who help themselves. Some nonprofits, to name Tata Trust, MESCO Trust and India Development Foundation, gave his school fees and helped him with zero-interest loans during his graduation. At the same time, he worked in a local electronic items repair shop and a garment store to share the household expenses with his single mother.

Finally, he graduated with flying colors in Electrical Engineering from KJ Somaiya College of Engineering and won national as well as state-level awards in robotics, which got him an internship with Larsen and Toubro. After the internship, he was employed by Tata Institute of Fundamental Research, where he used to earn Rs. 30,000 per month for the research work. It was when he afforded to spend some of the money for the house renovation.

He took up online teaching of international students to bear expenses for his preparation for GRE and TOEFL, to pay back his loans and purchase his flight ticket to the United States.

During his three-year tenure at Tata Institute of Fundamental Research, Jaykumar Vaidya published scientific research papers in some renowned international journals in 2018, which put him in spotlight with the University of Virginia where he earns a stipend of $2000 per month as an associate research scientist.

Mumbai’s Jaykumar Vaidya aspires to make India achieve self-reliance in nanotechnology through home-based manufacturing. On completion of his PhD, he plans to return to India and help economically disadvantaged students including poor girl children in realizing their dreams. He says uninhibitedly that he owes his life and success to his mother; at times he thought of eloping from home but his mother’s face held him back; she means the world to me.

Travel Beats, a subsidiary of Indian Eagle, strives to promote achievements of young Indians through the continued series of inspiring stories. Indian Eagle, a most trusted travel booking partner of overseas Indians, not only helps you book cheap air travel to India even in the last minute but also shares latest updates on visa, immigration, Indian passport and major airlines.

6 thoughts on “This Indian Boy from Mumbai Slum is Research Scientist in USA; Thanks to His Single Mother for Her Grit”