Los Angeles International Airport (LAX) is on a $14-billion renovation drive to redefine luxury and comfort for millions of passengers. In 2016, LAX registered a record 80.9 million air traffic. As of now, it is the second busiest airport in the United States. The airport set a new milestone in its history of evolution and expansion by unveiling the impressions of a 750K square foot concourse in the Tom Bradley International Terminal during a groundbreaking ceremony this week.

The Midfield Satellite Concourse, which is supposed to be operational in late 2019, is a $1.6 billion project. As a complement to the Tom Bradley International Airport, the concourse will accommodate the increase in the number of footfalls at the airport. It will have a dozen new gates for aircraft, modern baggage facilities, retail shopping space and dining outlets. With the new concourse in place, the overuse of the airport’s outdoor gates for deplaning will be reduced to the convenience of air travelers who board buses to the Tom Bradley International Airport from the outdoor area. 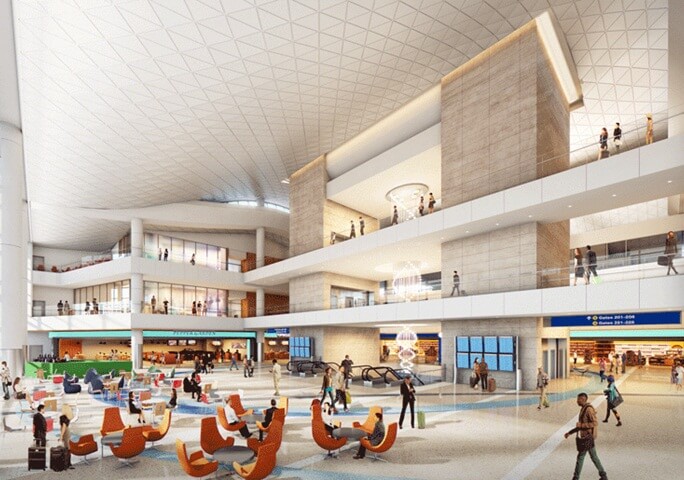 Two of the 12 new gates in the Midfield Satellite Concourse at LAX will accommodate the largest commercial aircraft like Airbus 380 and Boeing 747-8 and facilitate their deboarding in the first phase of the project. Seven more gates may be added in the second phase of the project, if needed, to reduce the traffic congestion further at the time of deplaning. A 1,000 ft underground passenger tunnel with moving walkways will connect the concourse to the Tom Bradley International Terminal.

Furthermore, the Midfield Satellite Concourse at Los Angeles Int. Airport will have new taxiways and a ramp tower to efficiently guide the movement of aircraft on the ground. The infrastructural renovation agenda also includes an elevated people mover to the concourse and a transportation hub to link the light rail service to the airport.

Indian Eagle is a trusted travel partner of Indians in USA. We have a proven record of booking cheap flights tickets from Los Angeles to India and offering the lowest airfare deals for flights to India from other major US cities.