‘Humanity is dead.’ We see this note of criticism and disgust spewed on social media by netizens across geographies even in response to the least important incidents of apathy in any part of the world. But, humanity is not dead. Rather, few people make sure to keep it alive in different forms such as compassion, empathy, mercy, benevolence and selflessness. In a recent instance of humanity, Indian American Jay Singh, in the US state of Ohio, took a corrective measure instead of a punitive action for teaching a lesson to a teen thief in his store.

Jay Singh, who owns and runs a 7-Eleven store in Toledo in Ohio, has become an inspiring figure after the locals went gaga over what he did to a teen boy upon discovering the teenager’s act of thieving in his store on the night of April 6. 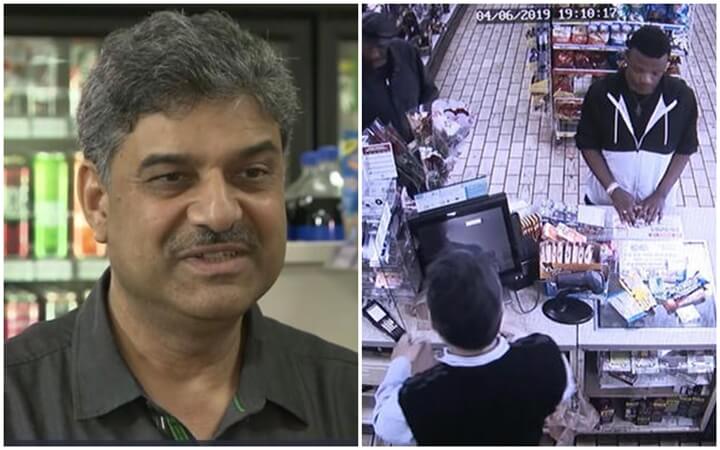 At his 7-Eleven store in Toledo, Jay Singh spotted a boy, who pretended to be a customer, and observed his suspicious behavior for some time. He saw the boy putting some stuff into his pockets, as reported by CBS News. He caught the thieving teenager red-handed and asked an employee to call 911.

When caught, the boy felt unnerved and said that he would put the stolen stuff back. Jay Singh told him to put the things on the counter so that he could see what the boy had stolen. On discovering that the stolen stuff was nothing but food, Jay Singh wondered, “Why was he stealing?”

On being interrogated, the teen boy said that he was hungry, and that he was stealing some food for himself and his younger brother. The moment the 7-Eleven storeowner Jay Singh got to know the reason, he stopped his employee from calling 911.

“You need food? I will give you food. That’s not a problem,” Jay said to the boy out of compassion for him and his brother.

Jay thought for a while that if the boy were handed over to the cops, he would be a thief on the police record forever, and that his life would deteriorate further leaving him without a good job. He realized that punishment would not correct the teen; it would rather perpetuate his misery.

On seeing no point in meting out punishment to the teenager for the thieving act, Jay took a corrective step. He filled a bag with food and gave it to the boy for free.

On being asked by CBS News why he took pity on the boy, Indian American Jay Singh said, “Giving food to the hungry is a fundamental Indian value, and it’s believed that the Almighty will bless you for such acts of kindness.”

This story is brought to you by Indian Eagle, a most trusted air travel booking partner of Indians in the US. Indian Eagle not only strives to offer the cheapest economy fare deals for flights to India, but also gives a shout out to inspiring stories of Indians in America.