Today is the International Day of Women and Girls in Science. February 11 is the day to eulogize Indian/Indian-origin women and girls’ contributions and achievements in different disciplines of science. From Anandi Gopal Joshi – the first Indian woman to study medicine in the USA, to Kalpana Chawla – the first Indian-origin woman in space, TIME’s Kid of the Year Gitanjali Rao – America’s Top Young Scientist in 2017, to California’s ‘Human Calculator’ Apoorva Panidapu, and two Indian American girls among the World Science Foundation Scholars in 2019, women of different age groups have been taking science and technology by storm.

Laalitya Acharya, 17, from Ohio is one of the eight Indian American teens among the 40 finalists of the Regeneron Science Talent Search 2021. What brought her this honor and earned her a scholarship of $25,000 is a cost-effective, easy-to-use solution that she has invented to address one of the most common issues in not only developing countries, but in developed nations like the USA. It is contaminated drinking water that more than 30 million Americans grappled with in violation of their right to a healthy life under the Safe Drinking Water Act, according to a 2018 study by the US Environmental Protection Agency (EPA). 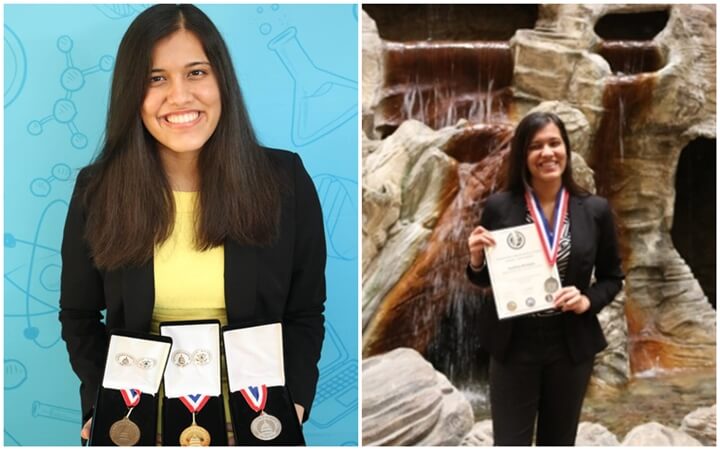 A trip to her native village in India revealed to Laalitya Acharya how damaging the health impact of exposure to contaminated drinking water could be. She noticed that many people were suffering from stomach flu and other physical ailments due to prolonged intake of contaminated water. She herself had fallen ill. A little study on India’s looming water crisis pulled up some disturbing facts to her dismay, including that nearly 75 million people in the country had no access to safe drinking water in 2017. Even the basic facilities to examine whether the water they were consuming was too contaminated to drink were beyond their reach.

Indian American Laalitya Acharya’s device named Nereid uses AI technology to detect contaminants in water. The portable device is basically a microscopic camera that clicks images of a water sample, which are then analyzed using AI technology to determine whether the water is safe or contaminated. The findings can be transmitted from the device to a local lab or water plant for further testing of the water sample if necessary. The device is so feasible that it can be easily integrated into a water system. She is currently working with the local administration to make the device accessible to households in her hometown so that the shortage of safe drinking water and the incidence of water-borne diseases can be reduced significantly.

At the age of 13, Laalitya Acharya happened to be one among the finalists of Discovery Education’s 3M Young Scientist Challenge 2017. Her idea to generate electricity from vehicular traffic can make clean energy affordable in developing countries where many underprivileged children study under streetlight. Bypass surgery is her favorite invention of the past 100 years. It was the beginning of her tryst with international-level science competitions, including the Intel International Science and Engineering Fair. Notably, she was a national finalist at the Stockholm Junior Water Prize.

She says, “Science and scientific experimentation is not a linear process, it is a webbed pathway that takes you through many different routes before you get to the end.” Being an advocate of STEM, she loves mentoring children in STEM.

On the International Day of Women and Girls in Science, Travel Beats – a leading Indian American community portal by Indian Eagle Travel – chose to celebrate Laalitya Acharya and her progressive journey in science. Subscribe to our free newsletter and tune to our Facebook page for upcoming stories of Indians in America, updates on US immigration and visa, and latest US-India travel news.