The topic, Devotion vs Malnutrition in India, has been debated over the years. Pouring in gallons of milk over Shivlings is an age-old tradition during Mahashivratri, while India is one of the few countries with the highest rates of malnutrition. However, people are embracing rationale in choosing survival over tradition, fight against malnutrition over wastage in the name of devotion these days.

Gangadhareshwara Temple in Bengaluru City has adopted a middle-of-the-road solution to let devotees offer litres of milk to the shivling and make the best use of their devotional offering in a hygienic setting. Located in T Dasarahalli, this Bengaluru temple has the no-blind-devotion-and-no-wastage policy in place throughout the year. If devotees offer milk at Gangadhareshwara Temple, they get buttermilk as prasadam in return. 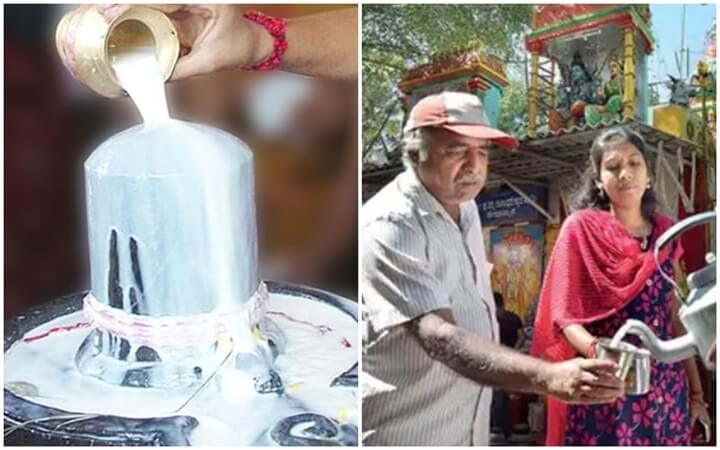 Lord Shiva being the presiding deity, Bangalore’s Gangadhareshwara Temple receives about 500 liters of milk every Monday. The milk offering measures a lot more than that on festive occasions. On Mahashivratri, a few thousand litres of milk pours in at the temple. Just imagine what a colossal waste it would have been, if the temple authority had let the devotion of people drain away.

The initiative to convert the milk offering for the deity into buttermilk prasadam for devotees is the brainchild of Eshwarananda Swamy, the head of Gangadhareshwara Temple. The thought – milk not available to a few million kids in India should not be wasted at any temple; rather, it should be recycled or reused to serve devotees and others – made him research a lot as to how the temple could set a positive example for other temples around. Thus, the middle-of-the-road solution was found and implemented.

Items such as vermilion and flowers are not mixed with milk during abhishekam of the Shiva idol at Gangadhareshwara Temple in Bengaluru. Both priests and devotees are required to pour milk on the shivling first in a hygienic way, and then offer other ingredients during abhishekam, adhering to the temple guidelines.

“We follow a hygienic process wherein the milk offered to the deity can be fermented, so that it turns into buttermilk. As the process takes a day, we usually serve buttermilk to whoever visits the temple on Tuesdays. We distribute buttermilk as prasadam only after checking its quality with the help of food quality analysts,” said Eshwarananda Swamy.

The temple visitors can consume the buttermilk there only or take home. The temple does not allow people to take the buttermilk home in plastic containers, adhering to its strict hygiene policy. Whoever visits the temple is encouraged to follow hygienic practices and is dissuaded from using plastics.

Scores of people queuing up to receive the buttermilk prasadam at Bengaluru’s Gangadhareshwara Temple, is a common sight to behold every Tuesday. Since the temple started recycling the milk to produce buttermilk and distribute it as prasadam, devotees have been offering more milk.