Hurricane Harvey in the Gulf Coast of USA has thrown normal tempo of life out of gear. Air travel to and from South Texas and Louisiana is temporarily disrupted following the shutdown of operations at seven airports and the cancellation of 9000 flights. Houston’s George Bush Intercontinental (IAH) and Hobby Airport (HOU) will remain closed for commercial flights until noon (CST) on August 31, 2017 as per the latest update. Major international airlines have announced waiver for travelers looking to cancel or reschedule travel to, from, or through the cities affected by Hurricane Harvey.

We at Indian Eagle compiled details of the following airlines’ travel waiver which is subject to the airlines’ terms and conditions pertaining travel dates, origin cities, arrival cities and seat availability. 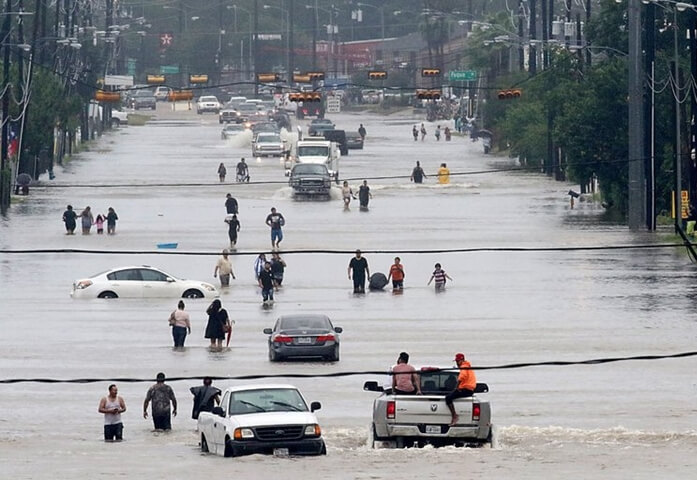 United Airlines has called off its operations at Houston Intercontinental Airport (IAH), and cancelled flights to and from Houston until noon (CST) on Thursday, August 31. The suspension of United Airlines’ operations at Houston may continue beyond August 31 if required. United flights to and from other cities in and around Texas may be delayed or affected due to Hurricane Harvey.

United Airlines will waive its change fee and fare difference (if there is any) for one-time change of date or time in the itineraries of the flights booked on or before August 25, 2017 for travel between August 25 and September 20, 2017 if the travel cabins (fare class), the origin cities and the arrival cities are the same as originally ticketed.

United Airlines will waive only its change fee, not fare difference (if there is any) for rescheduling travel (on request) for departure after September 20, 2017 and modifying origin or arrival city in the booked itineraries with travel dates until September 5. Rescheduled tickets must be used within one year from the date of issuing the original tickets.

In response to the impact of Hurricane Harvey on air travel, Delta Airlines has come up with a waiver for those looking to cancel their travel. Those having Delta flight tickets for travel dated between August 25 and September 7, 2017 are entitled to a refund in the event of flight cancellation or flight delay by 90 minutes or more. You can claim a refund if a segment (s) of your ticket remains unused by September 7, 2017.

Delta Airlines, too, will entertain requests for one-time change of date or time in the booked tickets for departure by or on September 20, 2017, without any fee. As per Delta Airlines’ latest update available at Indian Eagle, you are eligible for refund or change fee waiver only if you travel on Delta flights to, from, or through the cities affected by Hurricane Harvey, not beyond September 20, 2017. The cities are Austin (TX, AUS), Alexandria (LA, AEX), Baton Rouge (LA, BTR), Houston (TX, HOU, IAH), San Antonio (TX, SAT), Shreveport (LA, SHV), New Orleans (LA, MSY), and Lafayette (LA, LFT).

Delta Airlines’ change of date fee will be waived for rescheduling travel beyond September 2017, but fare difference between the original ticket and the rescheduled ticket may apply. You must complete the travel before the ticket expires (within one year from the date when the origin ticket was issued). You may have to pay fare difference for modifying your itinerary (origin or destination city change) even for traveling on or before September 9, 2017.

If your Delta Airlines flight ticket cannot be rescheduled within the above-mentioned guidelines, you can cancel it and book a new ticket against the unused value of the canceled ticket. Delta Airlines’ change fee and fare difference will apply in this case.

American Airlines’ change fee waiver is available for rescheduling travel booked on or before August 28, 2017 for traveling on or before September 7, 2017 given the disruption of commercial air connectivity in South Texas due to Hurricane Harvey. American Airlines flight tickets may be rescheduled for traveling not beyond September 20, 2017 and without changing the origin or destination city.

If you booked American Airlines tickets on or before August 23, 2017 for traveling by August 31, 2017, you may request to reschedule the ticket for traveling by September 13, 2017 without paying the airline’s change of date fee. If you wish to change the travel class or the departure city or the arrival city, fare difference may apply.

Daily Lufthansa flights to and from Houston, Texas have been cancelled until August 31, 2017 due to the severe weather inclemency caused by Hurricane Harvey. Lufthansa has offered to rebook the cancelled flights without any fee.

Those who booked Virgin Atlantic Airways flights to, from, or through Houston (HOU and IAH), San Antonio (SAT), and Austin (AUS) for traveling between August 25 and September 7, 2017 may cancel their tickets and rebook flights for traveling on or before September 20, 2017 without paying the airline’s cancellation penalty. You can call Virgin Atlantic Airways’ flight disruption service line: 0344 209 8711 in the UK or 1 800 862 8621 in the US.

Rebooking of flights is subject to availability of seats in the same travel class for traveling on or before September 20, 2017.

British Airways flights to and from Houston (TX), Austin (TX), and New Orleans (LA) have been called off until August 30, 2017. Given the aftereffects of Hurricane Harvey in South Texas, British Airways has announced to rebook travel (on request) for its customers up to September 20, 2017.

We are at work 24×7 to assist our customers in rescheduling or cancelling their travel to, from, or through the cities affected by Hurricane Harvey in and around South Texas. We do appreciate your patience since we are experiencing high call volumes (1-800-615-3969). We are in contact with the airlines which operate flights to and from Texas and Louisiana. However, be advised to check your flight status (delayed or cancelled) on the operating airline’s website.