After both Air India and United Airlines discontinued their nonstop New York-Mumbai flights for foreign airspace restriction and other reasons, direct Newark-Mumbai flight is the best alternative to those having New York as their primary origin and final destination. Being bereft of nonstop service, New York JFK to Mumbai CSI airport has added to the influx of passengers for nonstop flights between Newark and Mumbai, India.

With 327 travelers on AI 191, Air India’s Boeing 777 aircraft made a precautionary landing at London’s Stansted Airport, following a bomb threat, on its way from Mumbai to Newark in the wee hours of Thursday (IST), June 27. 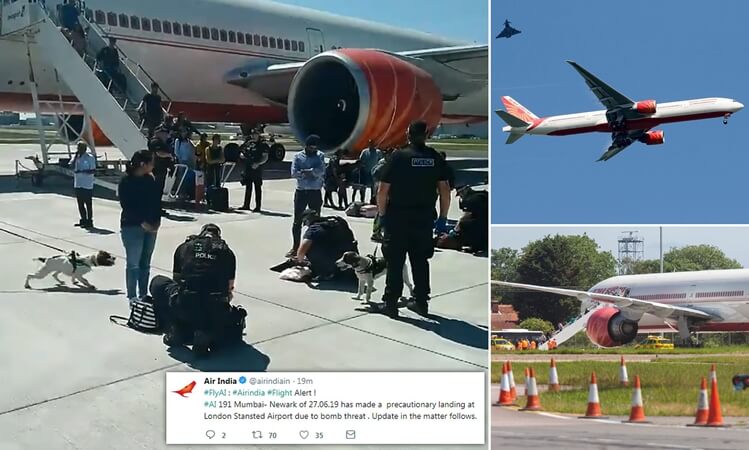 For emergency safety concerns, the AI 191 flight was diverted from its course around 2 PM (IST), and the aircraft landed at Stansted by 3 PM. The Air India pilots made an emergency landing safely, ensuring safety of the passengers and the crew aboard.

In response to the emergency landing of Air India’s Mumbai-Newark flight, Britain’s defence ministry scrambled Typhoon fighter jets, at supersonic speed, to escort the AI 191 aircraft to Stansted safely. Then the runway of Stansted Airport was closed.

Currently, the AI 191 Boeing 777 aircraft is parked, under the surveillance of Britain’s security forces, at a remote, isolated bay at Stansted. The airport has resumed its normal operations.

With the UK’s Royal Air Force bases within its vicinity, London’s Stansted Airport is a designated hub for dealing with emergencies concerning aviation security. Besides, it is an international airport in Essex, catering to 200 destinations across Europe, Africa and the Middle East.

Air India has not yet made any statement whether the bomb threat to AI 191 was a hoax as in some of the previous cases.