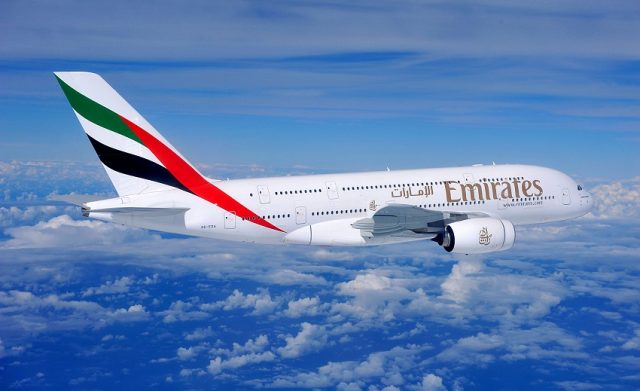 Sweeping as many as four awards including the Best Airline Worldwide award at the Business Traveller Awards 2017, Emirates Airlines (EK) is the Middle East’s largest and most reputed international airline. The airline is a subsidiary of the famed and highly reputed Emirates Group and is based in Dubai in the United Arab Emirates (UAE). With its major hub at Dubai International Airport, the airline serves multiple destinations spanning across six continents in the world. Emirates is one of the most popular airlines travelers prefer to use owing to the world-class service it provides.

A brief history of Emirates Airlines

1985 was the year Emirates Airlines (EK) was started and with as few as two aircraft. Dubai to Karachi was the first flight of the airline in October month of the same year. In just about a year, the airline included destinations such as Cairo, Colombo, and Dhaka among others. Over the years, Emirates Airlines rapidly grew to be one of the top international airlines in the world. In fact, it saw such tremendous success during its beginning year that Gulf Air suffered an estimated 56 percent drop in its profits. Emirates Airline, by choice, is not a member of any of the three world airline alliances. The airline feels it will be a ‘hindrance’ to progress as there will be the need for alliance partners’ consensus to move and react in the marketplace.

From its hub at Dubai International Airport, Emirates Airlines (EK) operates roughly about 3,600 flights every single week. These fly to more than 140 destinations in the world spread across about 81 countries. This is not all. The airline makes it a point to add to its flight operations list several new places to serve every year. It has codeshare agreements with several international airlines such as Air India, JetBlue, South African Airways, Korean Air, and Malaysia Airlines among others. Emirates flights to India are in high demand as are Emirates flights to USA

Emirates Airlines (EK) operates a massive fleet of more than 200 aircraft as per the estimates as of October 2017. The airline is famous for operating the largest ever Boeing 777 as well as Airbus A380 fleets in the world. When it comes to its mainline fleet, Emirates Airlines does not possess any narrow-body aircraft. The aircraft the airline uses come equipped with features designed to provide utmost comfort to passengers. For Emirates Executive, the airline uses an Airbus A319-100 aircraft.

First Class cabins come with two different types of seating. On board a First Class cabin of an Emirates Airlines (EK) flight, you’ll have the chance to enjoy a private suite and gourmet cuisine among other services. You will also be served exclusive beverages in-flight and can enjoy their Shower spa facility.

Business Class cabin amenities include winged headrest, massage facilities, a partition for privacy, reading lights meant for individual use, and angled flatbeds among others. You can also enjoy entertainment of over 600 channels on ICE. So book Emirates business class flights and enjoy luxury travel at its very best.

Economy Class cabins also come with their own share of comfort amenities which include adjustable headrests, laptop power ups in-seat, and ICE in-flight entertainment that lets you enjoy over 3000 channels. Emirates Airlines (EK) offers upgrades to some passengers in case the Economy Class is booked full.

Emirates Airlines (EK) offers among the most diverse dining options in the world. The airline keeps in mind dietary restrictions, age, religious observation, and preferences of its passengers when catering to them. The airline offers this in all types of travel class. While halal meals are part of the flight services, you’ll need to pre-order special meals by at least 24 hours before flight departure.

Getting an Emirates Airlines (EK) Digital Membership Card will be one of the most beneficial things for you. You can use the Emirates App to access easily your membership card and can even store it in your smartphone. You can enjoy tier benefits and earn miles a lot easier this way.

Not many are possibly aware of the fact that Emirates Airlines (EK) was among the first international airlines which introduced in a commercial flight a personal entertainment system. Today, all three travel classes of Emirates flights have this feature which is split into two main parts – ICE and ICE widescreen which is digital.

To have access to 33 Emirates lounges in 32 different cities, you’ll need to be among the airline’s First and Business Class passengers. Skywards Platinum and Gold members also have access to these luxury lounges. Those who are members of Skywards Silver can access only the Dubai Airport lounges.

First and Business class passengers in more than 60 cities have the option of availing Chauffeur-driven airport transfer services. These services are complimentary in nature and it is a known fact that Emirates Airlines (EK) uses only the best vehicles such as Mercedes Benz and Volvo V70 for this purpose.