It has been seven weeks since an Indian family of four from Washington DC was denied renewal of H1B visa on their current visit to India. The United States’ announcement to make the visa application and renewal procedure shorter and easier for Indians starting September 2019 ushered in an era of happiness for many applicants on one hand. On the other hand, USCIS’ extreme visa vetting policy makes life tougher for hundreds of H1B visa professionals.

In July 2019, an H1B Indian family’s trip to India became a nightmare when Jiteshwar Attri, a 17-year-old H4 dependent of the family was denied entry to the US on return. In a similar incident, Saurav Mazumdar, his wife and two US-born children have been stranded in India due to the denial of H1B visa renewal. 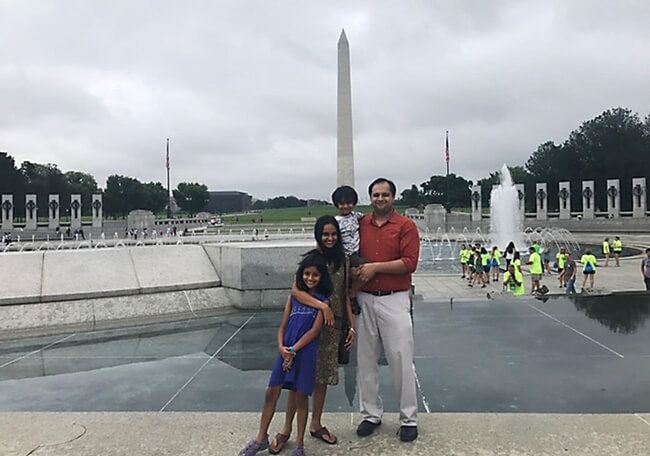 Saurav Mazumdar and his wife, Ishita Menon, have been living in Washington DC since they moved there to pursue higher studies 19 years ago. They have got used to calling Washington DC their home over time. He travels to India with his family every three years for re-stamping of his passport and renewal of the H1B visa. Once in every three years, their kids – 6-year-old Sameer and 11-year-old Sitara – get to spend time with the grandparents.

Neither Saurav nor Ishita had the least idea that their current visit to India would be a sort of nightmare. “I think we were naïve enough to think what has happened to us wouldn’t happen,” said Ishita Menon, who earned PhD from Georgetown University.

Right after they arrived in India in July, Mazumdar visited the US Embassy in New Delhi and dropped off his passport along with other documents there, the same way as he did previously. On having received an email 8 days later, he went to collect the passport; but it was not re-stamped to his utter surprise. Instead, he got a letter requiring him to appear for an interview the next day.

The interview was not a labyrinthine interrogation. Rather, it was straightforward, according to Mazumdar. Post interview, his fingerprints were collected and he was handed over a letter telling him to his dismay that everything was held up for the time being.

Though his heart missed a bit, he did not lose hope. Being optimistic about the US immigration system and President Trump’s preference for US-educated, skilled foreign workers, Mazumdar wrote about his ordeal to the State Department several times. In response to all of his emails, he was told, “Before making inquiries about the status of administrative processing, applicants should wait at least 180 days from the date of interview or submission of supplemental documents, whichever is later.”

Minimum 180 days of wait and watch means staying away from what they call home for 6 months or more. No work; no school; no life. Even it does not guarantee their return to the US.

Saurav Mazumdar had to cancel their flight tickets to USA from India and hired an immigration lawyer. All this while he has been pondering over what caused denial of H1B visa renewal to him despite the fact that he has been a coveted talent in data engineering and artificial intelligence for senior-level designations till date.

Travel Beats, a subsidiary of Indian Eagle Travel, is a leading Indian American community portal publishing latest community, US visa, immigration and travel news, as well as inspiring stories of achievements and philanthropy by Indians in USA. Subscribe to our free newsletter for the latest news and stories.