The lockdown imposed across the state of Tamil Nadu, in a bid to counter the second wave of the pandemic, does impact the rural and urban poor the most. Billionaire Sridhar Vembu, who returned from the Bay Area to rural India, started serving the poor with over 6000 meals a day for free in April. The capacity of serving the needy whose livelihood is at the mercy of lockdown has increased up to 30,000 free meals a day this month. ‘We’re trying to ramp up to 100,000 meals a day because the demand is high,” he tweeted this morning.

54-year-old Sridhar Vembu, who returned from the US to India aiming to make a difference to his native village in Tamil Nadu, was awarded a Padma Shri, on the eve of the Republic Day 2021, for his distinguished service in trade and industry. Known for his ‘simple living and high thinking’ philosophy, he is a software tycoon with a net worth of USD 2.5 billion and the 59th richest Indian in the world. 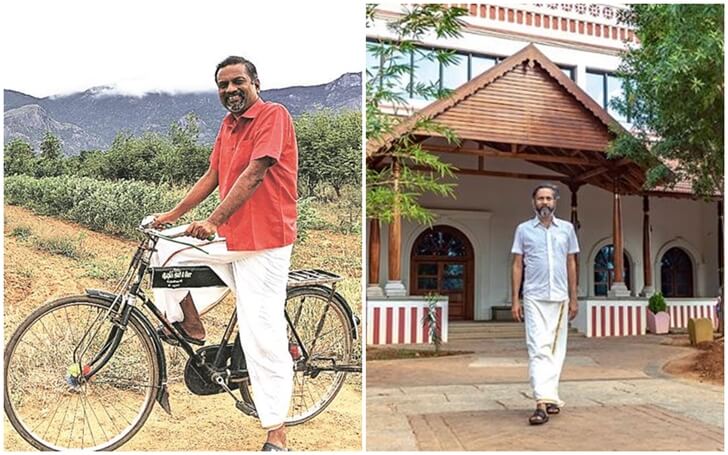 Tech billionaire Sridhar Vembu, who moved from Silicon Valley of the US to empower rural youths in Tamil Nadu and beyond, starts his day with breaths of fresh air, an unhurried walk, and greetings to whoever he comes across in the morning in his village named Mathalamparai, about 600 kms away from Chennai. While enjoying the blessings of rural life far from the ‘madding crowd’, he – the founder and CEO of Zoho Corporation with headquarters in Chennai and California – runs a global IT conglomerate with an annual turnover estimated at a whopping $1 billion.

Born in a family of farmers in Mathalamparai, Tamil Nadu, the ‘Barefoot Billionaire’ (as he is nicknamed for preferring not to wear sandals/shoes) pursued MS and PhD at Princeton University, New Jersey after having graduated from IIT Madras in 1989. He started his IT career as a wireless engineer at Qualcomm in San Diego. He went on to chase his ‘American Dreams’ in the San Francisco Bay Area until he discovered his passion for entrepreneurship and rural community welfare back home (India).

One of the Padma Shri honorees in 2021, Sridhar Vembu founded Zoho Corporation in California (which was known as AdventNet from 1996 till 2009). From its global headquarters in Chennai, Zoho Corporation branched out to his native village and some suburban areas including Renigunta in Andhra Pradesh before expanding to the IT corridors of urban India. With offices also in the UAE, Japan, Singapore, Australia and China, Zoho Corporation has over 60 million users for its suite of cloud-based business solutions deployed by Amazon, Zomato, Xiaomi, Ola, Whirlpool, Phillips, among others in its worldwide clientele.

20% of Zoho Corporation’s employee strength of over 7000 is pooled from India’s rural backwaters. 16 years ago, Sridhar Vembu founded Zoho Schools of Learning with a vision of making rural youths and city-bred jobseekers employable with practical skills. Zoho School of Learning strives to transform the landscape wherein the focus is on grades and bookish knowledge.

At Zoho Schools of Learning, students in the 17-20 age groups, who have completed Class 12 or hold a diploma in vocational training, get hands-on training in web design, programming, networking and marketing, among others for free. Rather, a monthly stipend starting at Rs 10,000 is given to each of the students throughout the training period that spans up to 24 months. They are also taught English communication skills. Those who successfully complete the course are absorbed into Sridhar Vembu’s Zoho Corporation.

One of the lesser-known things about Sridhar Vembu is that he had bagged the post of a lecturer at the Australian National University, Canberra upon completion of his PhD in the US. He quit it soon after he found his call – a pursuit of career in technology. He was only 26 back then. “Don’t think hard about what you could have done differently. Keep looking forward to what the future has in store for you”, is one of the lessons he gives to his students.

He is so committed to giving back to his village that he started offering free tuition to the children of farm laborers and daily wagers, whose access to classroom-learning was cut off due to the closure of village schools during the pandemic-induced lockdown across the country. What started out of a pressing need of the hour for a few children has brought nearly 100 kids within its ambit. It inspired the USA-returned billionaire to build a rural school startup that will provide quality education and food for free to underprivileged rural children.

4 thoughts on “This US-returned Software Tycoon who Received Padma Shri This Year is Serving 30,000 Free Meals Daily in Rural India during Lockdown”