The Indian American community’s Dussehra celebration for the good’s victory over the evil seems continuing with the felicitation of Minal Patel Davis at a special event in the White House. The US Secretary of State, Mike Pompeo honored her with a presidential award for her outstanding contribution to the fight against human trafficking in Houston City. Her felicitation was attended by President Donald Trump.

The ‘Presidential Medal for Combating Human Trafficking’ from the US government is one of the nation’s highest honors bestowed upon those showing exceptional courage for the sake of humankind. Indian American Minal Patel Davis exclaimed that she found the official recognition of her efforts ‘unbelievable’. 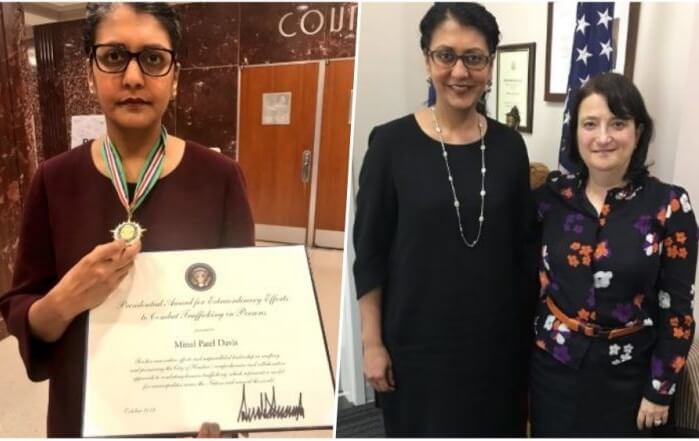 Houston City Mayor Sylvester Turner, who declared Indian American Rukmini Kalamangalam as Houston’s Youth Poet Laureate in 2017, had appointed Minal Patel Davis as a special adviser on human trafficking in 2015. Minal took the bull by the horns for alleviating the incidence of labor exploitation and sex slavery in Houston, the fourth largest American city. She helped Houston Mayor in advancing the systems to combat human trafficking, from a policy-level perspective.

Minal Patel Davis is a most invited speaker at regional, national and international panel discussions on the evils of human trafficking and the ways to deal with it. Recently, she took flights to India and Canada, where she told the government officials about Houston Mayor’s approach towards combating human trafficking and discussed how municipalities could play instrumental in the fight against human trafficking.

One of the guest speakers at the United Nations World Humanitarian Summit, Minal studied MBA at the University of Connecticut, and pursued BA from New York University.

This story is part of our continued effort at Travel Beats, an Indian American community portal by Indian Eagle Travel to promote achievements of Indians in USA. We not only strive to make last-minute flights to India cheaper but also cater inspiring stories, community news, and travel updates to Indian Americans through our free newsletters.